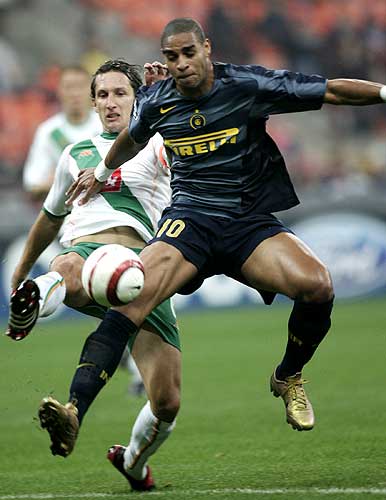 Tomorrow F.C. Internazionale Milano entertain Werder Bremen at home. On paper, this is our toughest competition in Group B. Werder Bremen come into this game with a single point, the result of a goalless draw against Anorthosis Famagusta. Their form in the the Bundesliga has been quite different, though. Werder Bremen have won their last three league games and have scored 10 goals in their last 2 games. Of course, in those 2 games they conceded 6 goals so there may be some room in the back.

We are, of course, looking to rebound from our horrifying defeat at the hands of the forces of darkness this last Sunday. Our fearless Captain, Javier Zanetti, had this to say about about last match and the one tomorrow:

"Milan won the derby but we look ahead with optimism. We must try to get our second win in the Champions League. There are so many games left in the season that it's early days yet. Mourinho told us after the game that we should think about Wednesday's encounter because there was nothing we could do about the derby result."

On the other side of the pitch, Werder Bremen midfielder Torsten Frings had this to say about the upcoming game:

“With the four goals conceded against Hoffenheim, there was certainly a lack of concentration on our behalf caused by the 4-1 lead. That won’t happen against Inter. We want to present ourselves well there. We have the potential and the self-confidence to do that. We’ve won our last three games in succession and that’s a little run we’d like to continue."

For those of you looking for Mourinho to tinker with his lineup after Sundays loss, you may be disappointed. Mourinho has said that "eighty percent of my team will be the same as last Sunday's," and he has called up a great heaping pile of players (well, 20):

I think we are likely to see Muntari instead of Vieira tomorrow (fingers crossed) and I wonder if Adriano will start ahead of Quaresma. We could see a repeat of Nico and Marco in the back as both will have league suspensions.

Werder have been on a bit of a run and would like to keep it up. They have a reputation for attacking football (and the goals to show for it). Keep your eye on Özil and Diego -- Özil has scored 3 goals with 3 assists in 6 games; Diego has 3 goals and 1 assist in 4 games. Add that to the talent up front and they will undoubtedly make our defense work. The question is, can Naldo and Mertesacker hold the back or will they allow 4 more through (fingers crossed on the latter)?

We dont have much of a record against Werder Bremen. We met them in the group stages of the Champions League way back in 2004/5. In those two games, we beat them 2-0 at the San Siro (both goals to Adriano). In the return, we drew 1-1. So not much to draw on there. Last year Bremen lost every one of their away matches in the Champions League and failed to advance out of groups. This year, I am sure they are hoping to fare better. I hesitate to compare league games simply because the Bundasliga is very different from Serie A. Lets just say that both Inter and Werder Bremen are competitive teams looking to win. Hopefully our recent loss will help us remember how much we like to win and not just depress the team.

In a strange coincidence, the referee for this game is Lubos Michel (Slovakia); he was also the ref the last time Inter met Werder Bremen at home (2004).

This game will be a test for Inter and the squad's mentality, as well as for Mou's ability to balance an attacking attitude with the obvious need for defense. The derby showed what happens when the midfield plays too deep, forcing the front three to track back too much. We need to work on stopping the ball at the half so that the midfield and the front line link up properly. Marco (if he plays) will have to keep on his toes. We can win this if we are smart - keep possession, no injuries, and end the game with 11 players. I predict Inter 2 - 1 Werder Bremen (although I would prefer 2-0).