Baseless Rumors and Other News

Share All sharing options for: Baseless Rumors and Other News 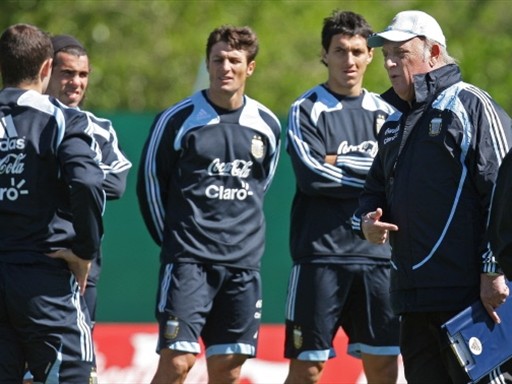 Who do you think Nico is giving the stink-eye to?
Most of the squad is off on national duty, leaving only the wounded and Crespo behind. Well, ok, so there are a few more (Cruz, Cordoba, Toldo, Orlandoni), but there are so few left in Appiano Gentile that Mou has them training with the Primavera team. Mancini has gotten his first call up for the Brazilian national team while Quaresma has found his way back to the Portugal team.
Here is who is going where to play what:

Oh, and Davide Santon played in the Itlay U19 Euro Qualifier against Russia on October 7. He is back now (Russia won).

And now for a little bookkeeping - everyone get out your calenders

The people who set the match times for the Serie A have been busy and here is our revised fixture list for the next month or so:

And now the fun stuff:

Without the structure of weekly games, sport's "journalists" let their minds wander and we end up with all sorts of utter nonsense published as "news." Just for fun, I thought we might go through a few of them.

L'Equipe says that Müller-Wohlfart, the doctor for Bayern Munich, offered Patick Vieira a shot of Actovegin to help heal his injury during the Euro 2008 tournament. Actovegin is made of calf blood and is illegal in France. The good news is, Patrick refused the treatment as did the doctor for the French national team. So the big story is Vieira was injured and wanted to play in the Euros so he asked his footballer friends if they had any tips to help him get better faster. A teammate told him about the calf blood stuff and the French team doctor said it was not allowed. Wow, what a huge scandal.

Goal.com says Tuttosport says that Aquilani is on his way to Inter in some sordid swap with Crespo. Of course, they also said that "neither club is willing to shed any light on the matter." Probably because it is utter bull crap.

It turns out Secco is a spy for Inter and has been purposefully sabotaging Juve for years. Secco unwittingly told an undercover reporter disguised as Moratti that: "We are really destroying them, and the funniest thing is no one has the foggiest idea. They all think I am just stupid, they have no inkling that I am deliberately buying rubbish players."
.....
Ok, so that one is, admittedly, a fabrication, but it sure was funny.

Ooo, here is another good one: apparently we are going to trade Cruz and Cambiasso for Hamisk. Or, we may trade Cruz and sell Cambiasso to get the 100 million Euro Inter would need for Hamsik. wow.

And this is true but wacky:
Adriano's house near Como was burgled during the Bologna game last week. The thieves even went so far to rip his safe from the wall. The authorities are looking at CCTV footage to try to find the culprits.

After all of that, we need a little something to lift our spirits. I was scrolling through the photo archives on the Inter web page (I do that a lot - it is sort of a problem for me) and I found this beauty from May 2007. It kinda sets a person's heart all a-flutter. He's a dirty, dirty boy. 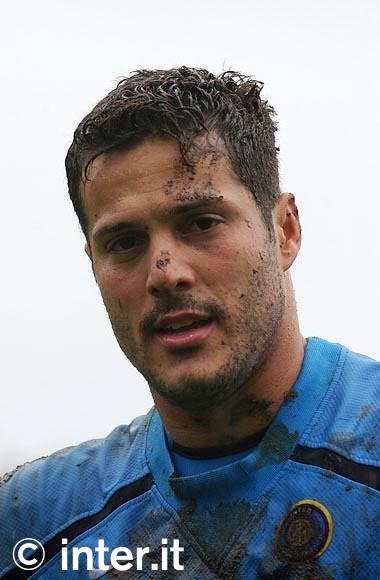 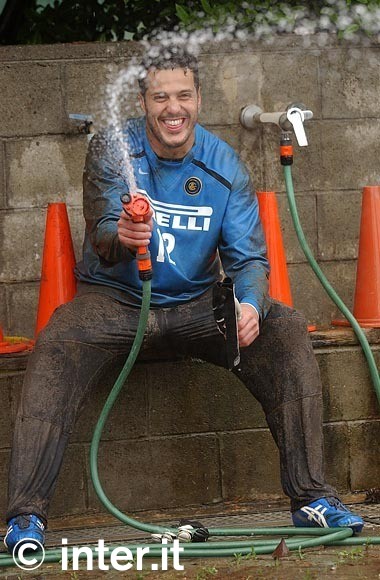 Oh my goodness... I just found this on Marco Materazzi's blog... Who do you suppose is behind the camera? (scroll down to see the photo)
Boy's night out or man date? you decide. 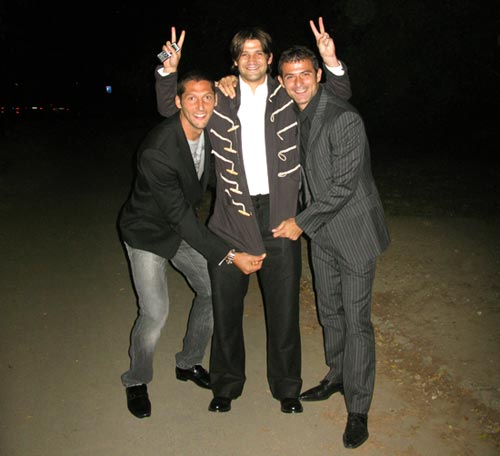