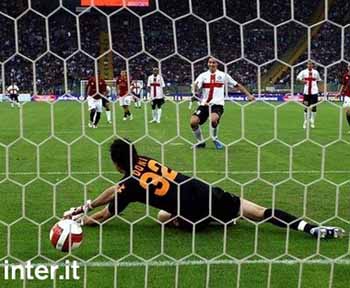 Here we go, back to the Stadio Olimpico in Rome. I think it is safe to assume that this will be a take-no-prisoners, burn-and-salt sort of game. I will be surprised if both (or either) team ends with 11 on the field after 90 minutes. Both teams want a win, and depending on how you look at it, need a win. Inter, to prove they are still the force they were last season, and Roma to kick start the season and give the squad some confidence before their game with Chelsea. Right now, Roma have been backed into a corner and I have no doubt they will come out fighting on Sunday.

How about a little walk down memory lane to get us in the mood. Here is Roma - Inter from last fall.

Inter have thier share of injury woes this season, and then some. Right now the list stands at:
Jimenez, Figo, Rivas, Maxwell, and Vieira

Add to that Materazzi, Chivu, Burdisso and Samuel who may or may not be availabe and you can see the problem. Basically, our choices for defense are Maicon, Cordoba, Zanetti, and our two Primavere, Mei and Santon. Here's hoping Chivu and Nico are really ready to play.

Everyone has been speaking about the upcoming game, starting with Moratti who came to visit training today. When asked about the game and Roma's position in the table he said:

Roma could even be more aggressive against us because they haven't won well their last matches. They need points to show their strength. It will be an even harder match than in past years.

Whereas Mourinho, after lamenting over our injury problems in defense, had this to say:

I think Roma are a wonderful team with the stability of a coach who has worked with the same players for many years. They're just going through a bit of instability at the moment, they had to change tactical system because the results weren't the same, and they didn't have Totti. Our team has had injuries and suspensions but there's a certain stability on the pitch. We're very stable because we know where we have to get to. We just need to work with tranquility.

Chivu and Mancini are looking forward to returning to the Olimpico in black and blue, and Júlio César has been joking with Doni and Juan while on international duty in Brazil about Inter and Roma's relative position in the table. So, everyone is in high spirits.

Sunday's lineup depends on exactly who is and who is not available. the Corriere dello Sport thinks Chivu is ready and the lines may go like this: 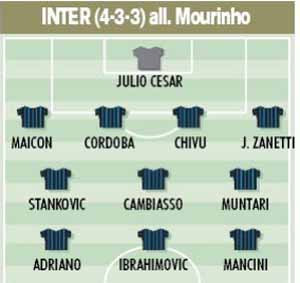 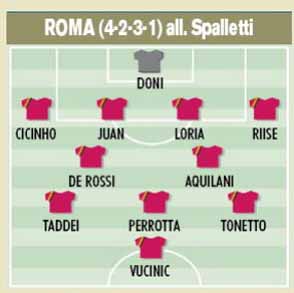 --
--
Spalletti has already said that Totti will play 45 minutes for Roma and I bet both Quaresma and Balotelli see some play time for Inter. Hell, we may even see Cruz or Samuel on the pitch. Quaresma is on his way towards a match ban - he has collected too many yellow cards and if he gets one tomorrow, he is out for Genoa.

Besides the defense, I am also worried about Cambiasso and Zanetti. I watched Argentina's games this past week, and frankely, Zanetti needs a rest. Dont get me wrong, I love our captain, but, well, he was just not all there against Chile, and really, neither was Cambiasso. I am hoping that they will be better now that they are back home with their families and such, but with Vieira out there is really no one to step into Cuchu's role. Right now, Inter's fabled depth is about 6 inches.

--> Totti. I will be interested to see if the sun really does shine out of Totti's behind as has been reported. Right now, his absence is a great excuse for an under-performing team, but if he fails to bring home the points, what does that mean for the rest of the season?

--> The new young guns. I hope that Balotelli will get a little field time. Both he and Aquilani had great international breaks and now it is time to see if they can do it in league play too.

--> DDR. Daniele de Rossi has been carrying Roma (and the Azzurri) for two months. How long can he continue before he just drops in exhaustion?

--> Ibra and Adriano. Can Ibra really bring it when it counts? Is he finally over his tendency to "check out" when games are not going his way? Is Adriano really on the way back to optimal form? Has the Emperor returned (man, I sure hope so)?

Here is the call-up list. Cripes, we are bringing one of the babies along: