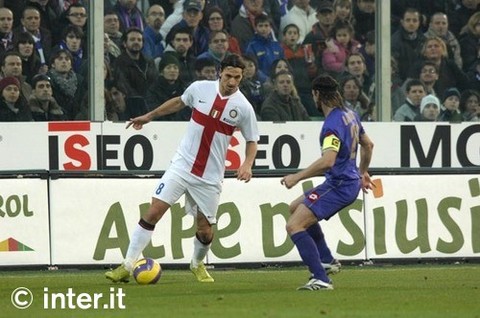 What: Fiorentina v Inter
Where: Stadio A. Frachi, Florence
When: Wed. Oct 29, 20:30 local time (12:30PM pacific, 3:30pm eastern)
Referee: Roberto Rosetti / assistant refs: Lanciano Ayroldi / 4th official: Girardi
How to Watch: Find a stream or watch it Thursday on FSC (I think they are confused over there).

Ok Boys and Girls, it is crunch time. We are headed to Florence to play La Viola at home. This is a difficult post for me as I like Fiorentina, I really do, but Inter comes first so Fiore must go down. Inter will not have an easy time of it, especially as almost all of our midfielders are either completely injured (Cambiasso, Figo, Jimenez, Muntari), sort of injured (Stankovic), or just coming off injury (Vieira, Dacourt). On the up side, most of our defenders are back so catenaccio is always an option!

If you recall, this fixture last year was the one where apparently we played so well that Fiorentina applauded us and lined up to shake hands with the team after the game. The FIGC was so touched with this spontaneous outburst of good sportsmanship that, for a while, everyone had to do it. Somehow I dont think that will happen again this year. Here are the highlights from our trip to Florence last year:

You can tell it was a good game because the highlights are 7 minutes long. Other memorable moments from this game include Jimenez's first goal for Inter (and it was a doozy), and, more ominously, Dacourt's knee injury. It is likely that Dacourt will start tomorrow and I hope there is no residual bad juju at the stadium. But enough with the safe, happy past; now we must turn our attention to the scary future.

Mourinho has called up a squad of 20 for the game:

Notice Cruz and Adriano are nowhere to be found. The scuttlebutt is that Cruz, Obinna, and Balotelli did not follow orders on Sunday so are on Mou's naughty list. Cruz, it seems, was playing selfishly which is unpardonable. Plus, as an adult, he should know better. The children, Obinna and Balotelli, on the other hand, are getting a second chance after having a stern talking to. Mou said:

"I spoke individually with players with whom I had to speak, I spoke also with the group. I talked to Mario [Balotelli], one of the players that on Sunday should have done better, there is no problem at all. It is also my job to help a young player to understand things, I am here for that. I will never stop facing a player who has not played well. A player who has not played for the team is another story, when one does not play for my team why should I defend it?" 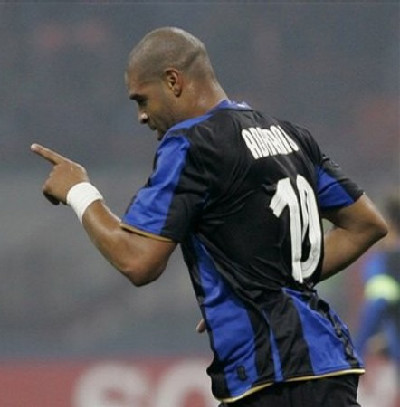 Adriano, on the other hand, is up to his old tricks (you all have no idea how hard it is to type with my head in my hands). Apparently he was out clubbing until 4:30am Sunday night so was not entirely at his best on Monday. Then, to make matters much MUCH worse, he was "significantly" late to training today. I think that Mou was pretty darn specific at the beginning of the season that he would not tolerate players being late to practice. Oh Adri, why do you torture us so?

Although Stankovic is on the squad list, he still has to pass a late fitness test before he takes the field. If he cannot, we may see a repeat of Chivu in the midfield (it happened last season, it was horrifying).

If everyone on the call-up list can play, here is a likely starting lineup:

or, if you prefer:

Fiorentina have been in fine form and are only 1 point behind us in the table. Luckily for us, we have a great away record, and have been scoring goals like crazy away from the San Siro. For me, this is a bit of a watershed game. I love Mourinho (despite his new haircut), but looking at our form this season as compared to last, I wonder at what point we decide the experiment is not working. If we could win like crazy with Mancini, who some call a tactical boob, it seems we should be able to win with a coach who is, by all regards, much more tactically able. In other words - what the hell?

So off we go, with a song in our hearts and a smile on our faces, with the hope of many goals that lead to ass-grabbing opportunities. 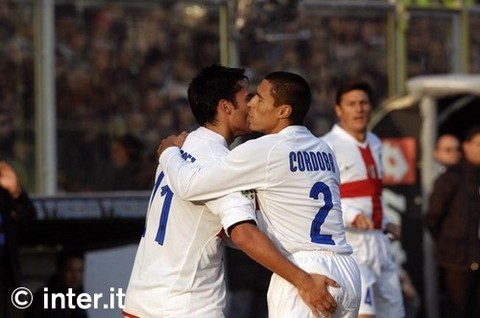