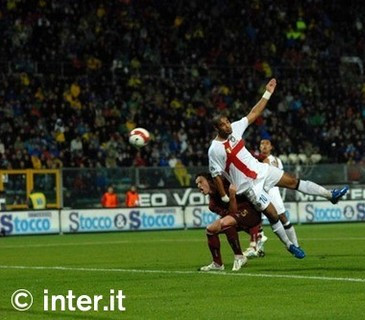 Inter go down to Reggio Calabria to take on the Amaranto to take home 3 points and end their goal-scoring dry spell. Wednesday's game was a bit of a downer, especially considering last year's stellar form. Comparisons are already being made between Mourinho and Mancini, and a win this Saturday will go a long way to quieting the media. Like me, Mourniho is not entirely happy with our standings, saying:

Still, Moratti has not lost his faith in Mou, and, deep down, neither have I. I was a bit miffed on Wednesday, but, honestly, I cannot think of who I would like at the helm instead.

Last year Inter won this fixture 0-1 with a goal by Adriano (pictured above). Here are the highlights:

This year, though, Adriano will not be joining the team down south. Mourinho has called up 20, including 2 Primavera players:

Poor Cruz is also still on the outs leaving the door ajar for Crespo. Mourinho has said that Vieira will start tomorrow and there is still some doubt that Maxwell is ready to play 2 games in a row. So, given a 4-3-3, the lineup may go a little something like this: 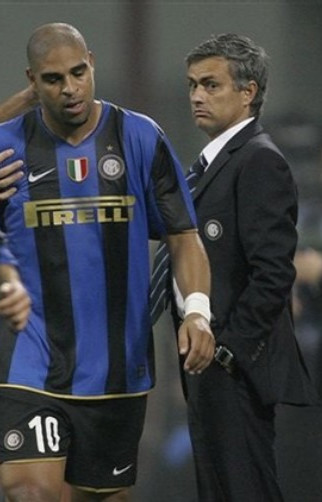 Of course, it would be nice to have someone on the squad that can play for Ibra once and a while. Given the number and pace of games he has been playing, I am afraid he will not be able to last the season. It is a shame that two of our strikers are on the outs with Mourinho. Adriano certainly appeared to be fighting his way back into form, and even Mourinho is a bit baffled by his lapse saying:

I don't know if Adriano will understand being left out. I can say that if there is someone who is dedicated to him with all his heart as coach and also as a colleague, it's me. But then comes the moment in which I am the leader of a group of 29 players, a group in which there are rules and where a coach can't have one player who can allow himself to do what the others can't do. My affection is the same, it doesn't change, but I have to defend first of all, as my career as a coach shows, the club, then the squad and at the end us, the group... There are things which for me are not possible to accept. The road back is long, but not impossible.

I just hope that Adriano can win back his place in the squad. For all his faults, he is massively talented and brings a spark to the team that has been vital this season. Not that he cannot be replaced, and if he does not get his act together I have no doubt that he will be, but I am fond of him as a player and would love to see him succeed. Besides, we really need those goals he has been scoring right about now. Even Mou admits he would be important for the match tomorrow, but, for the good of the squad, he will not play. I just hope that Mou is not cutting his nose to spite his face.

On the disciplinary front, both Quaresma and Maicon are a booking away from a match ban. We could probably get by without Quaresma, but to loose Maicon against Udinese (Nov 9) could prove disastrous.

Since the Reggina blog on this board appears to be dead, I will do a quick rundown on the opposition.

Reggina come to this game at the bottom of the table with 5 points, all from home games. In addition, the Amaranto have scored in their last 11 home games, and, in their last 12 home matches, Reggina have lost only 1 (8 wins, 4 draws). Still, their place at the bottom of the table means that this match may well be do-or-die for Reggina's coach Nevio Orlandi.

Orlandi has called up 20 players of his own, including Bruno Cirillo who was banned for their last match (against Napoli):

Il Corriere dello Sport thinks they will play a Christmas tree formation that may go something like this:

Although they are at the bottom of the table, Reggina are not going to roll over for the Nerazzurri. Cozza was quick to point out that: "Inter will find a completely different team compared to the one that lost to Napoli. Four players will be back, including myself." Even so, they are completely reliant on Corradi up front, and while he has been scoring, he has make only 4 goals, including 2 penalties. To add fuel to the fire, there are rumors that if Reggina do go down hard to Inter tomorrow, it may spell the end of Orlandi's tenure. Walter Novellino is said to be waiting in the wings.

So, although I have no doubt that Reggina will put up a fight, I also have no doubt that we are fully capable of taking them down. Last year we managed a 4-1 win in a Coppa Italia game, and I expect we can repeat that tomorrow. Our main difficulty will be in controlling the midfield: Stankovic has had a couple of good games, but only when Cambiasso is there to clean up anything he cant handle. With no Cuchu, we will have to rely on Vieira having one of his good days (fingers crossed).

Our defense is rock solid and, unless they are awarded a penalty (Marco, I am looking at you), we should be fine. Who knows, with the way JC has been playing, he could probably stop a penalty - but I prefer not to chance it. I would very much like to continue with our clean sheets (thank you thank you thank you Julio Cesar).

Hopefully the front line has had some shooting practice this week. On Saturday, I want to see Reggina's keeper tested. If someone shoots, it should be on target. Also, I want every chance to be fully capitalized on. There is absolutely no reason we cannot walk away from this with a 3-goal lead.

So, everyone, lets get this win and hope that Napoli draw against Milan!