Inter v The Army Of Darkness

Share All sharing options for: Inter v The Army Of Darkness 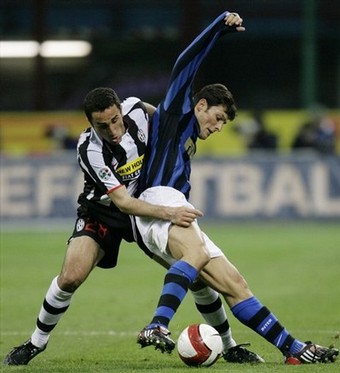 Press: What do you like most about Juventus? What has impressed you most about the Bianconeri?
Mourinho: I like Inter more...

This game has turned me into a nervous wreck so I have put this preview off until the very last minute. I just plain flat out hate Juventus. I am not proud of myself - I try to be open-minded and not too judgmental, but there is just something about Juve - I find that I cannot help myself, I must hate them. Even more galling is that Inter just cannot seem to beat them on a regular basis. Statistically speaking, Juve wins. Almost all the time. Sometimes Inter win, and slightly fewer times, we draw: Juve and Inter have played 177 times in Serie A. Of those, 79 were won by Juve, 54 by Inter, and 44 were draws. The odds are slightly better if you only look at Inter home games. In that case, Inter are far more likely to win than to loose or draw. Given that Saturday's game is a home game for Inter, that statistic gives me hope. But I am still realistic.

Last year was one of the bad years - Juve won this fixture (2-1), although we drew away so it was wacky all around. I would normally put highlights here of last year's game, but I am just not that masochistic. How about a little Cuchu instead?

See, wasn't that better? Ok, down to brass tacks.

Mourinho is playing this VERY close. He gave no hints as to line-ups or formations today at the press conference, and he has called up every available player - it is "all hands on deck" for this game. Who is available? Well, since Figo is back to training with the squad, the only unavailable players are Cordoba (suspended), Obinna (on his way back from Columbia), and the injured players (Rivas, Chivu, and possibly Jimenez).

With such a large pool to choose from, predicting a line-up is also a little dicey. La Gazzetta dello Sport predicts Mou will play a 4-3-1-2 with Marco taking Cordoba's place and Ibra and Cruz up front (right). Il Corriere dello Sport are predicting a straight 4-4-2 (very vanilla) with Nico in the back and Balotelli upfront (left). 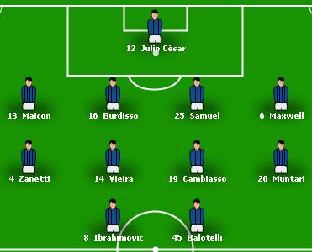 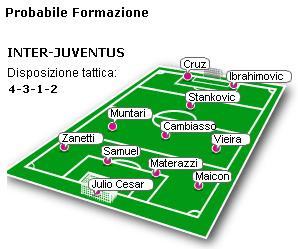 I suppose it demonstrates the depth and flexibility of the squad that either of those formations (plus a 4-3-3) is possible. For myself, I would like to see Adriano given another shot, and, despite his problems, I think Marco is a better full back than Cambiasso. I would rather see Marco paired with Samuel and Cambiasso in the midfield than have Cuchu play out of position. But that is just me.

Realistically, I think we can beat them. We have a squad full of hugely talented players willing to lay it all on the line tomorrow. Our Brazilians may be tired, but they just came off a great, confidence-boosting win (plus, they are all used to the trip by now). Ibra and Cambiasso were rested last week - Ibra didn't even train - so should be raring to go. All we have to do is play like we mean to win and keep on until the last whistle. I wont make any predictions, though; I am too superstitious.