Inter v Panathinaikos - The Enemy is Us

Share All sharing options for: Inter v Panathinaikos - The Enemy is Us 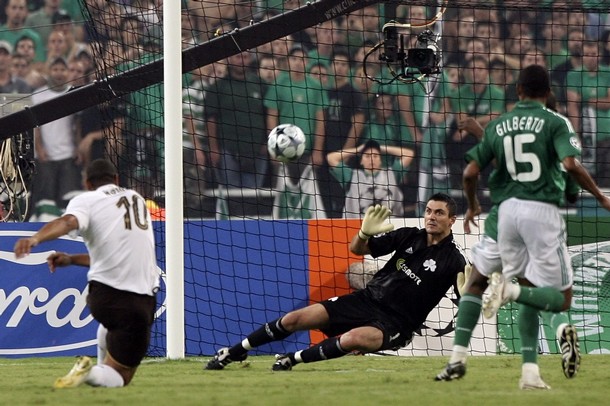 Basically, we have to win this game. Sure, we could probably squeeze through with a draw, but anything less than a win will mean quite a bit of drama for Matchday 6. On paper, this game should be no problem for us. After all, we beat them 2-0 just two months ago (see above) and Inter are just coming off a very important win. According to Mou, though, Saturday's good result against Juve could be the very thing that brings us down:

"It's not Panathinaikos I'm afraid of, it's us. I'm not scared to say that we're a better team. We come from a different reality to theirs. The Greek league is not as good as Serie A and Inter want to win the Champions League – Panathinaikos do not. But great motivation can work miracles and a lack of motivation can create nightmares.

Our slump started after we played well against Roma. Three days ago we had our best match of the season against Juventus and there is a real risk of going backwards again. That's football. Experience tells me that we must forget the Juve win. Panathinaikos must be our starting point. If we win we are through as group winners, if we draw we are also through, but we mustn't forget that if we lose we're in a lot of trouble."

Henk ten Crate has also come to Milan for points, and aims to get at least one from Inter. He said:

"We have nothing to lose. If we remain organized we can surprise any team. We respect Inter a lot, but we are not afraid of them. Over 90 minutes, anything can happen. Aside from Inter, who are almost through, it's a very open group. We have to go to Milan with the strong belief that we can get at least a point and build from there."

Basically, Bremen has just been hammered, with every single one of their points the result of a draw. Still, if they manage to beat Anorthosis tomorrow, second place is wide open.

Silva Cleyton, Bryce Moon and Sotris Leontiou are all injured and will not play. Right now Pana's top goal scorers are Salpigidis (5), Ivanschitz (4) and Mantzios (4) and after last weekend, Pana are fourth in the Greek A League. They have won 5 out of 11 games, drawn 4 and lost 3. There are clearly some problems with their defense as they have allowed 10 goals. Lets hope we find a couple of those holes tomorrow.

Vieira is injured - again. National team duty is the kiss of death for him. Every time he goes, he comes back with some problem. Chivu and Rivas are still out - and probably will be until January. Samuel, while clearly the first choice to start in defense, was still injured at the time Mou submitted his Champions League list so was not included. Hopefully we will be looking at a Materazzi - Cordoba pairing in the center. Poor Nico, I just dont know how he will be able to redeem himself after Anorthosis.

I think the line-up will be very familiar:

But you never know what Mou will pull out of his hat. Balotelli may well start next to Ibra (I think that is what La Gazzetta prophesied). We may also see Quaresma or Mancini on the pitch, and Figo may be a likely substitute for Stankovic given the role he has been playing. It has been so long since I have seen Figo play, though, that I can't be sure.

Mourinho is afraid that Inter will be too friendly on the pitch tomorrow. He doesn't want the team to settle for the draw. Basically, we have to take the field tomorrow and own the match. No stupid slip-ups in the back; no missing sitters (ehem, Ibra); and for god's sake, NO RED CARDS (Marco, Muntari, keep it together). I have no doubt we are the more talented team, but that does not guarantee anything in football. So, tomorrow morning, all you Interiste out there, light a candle for the football gods. It is always nice to have them on our side.

A little pre CL press conference, for those that understand Italian