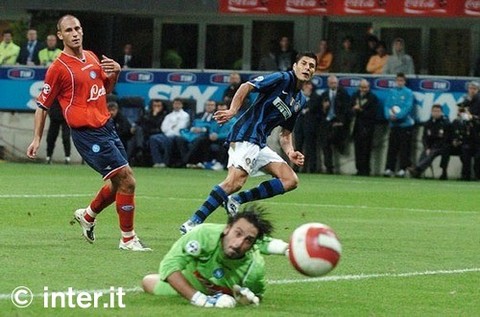 Alright, now is the time to shake off last week's defeat with a big win against Napoli. More than anything, Inter need to pull thier collective head out of their ass and take Napoli seriously becuase if we dont, if we try to float by like we did with Panathinaikos, Napoli will make us pay. Dont get me wrong, I think we can win this game and win it handily, but only if a focused, hungry Inter show up on the pitch. Mou agrees:

I will say something I am very sure of: we play our third game in a week and go into it after a Champions League match, but I am convinced we can get back to the results we want if we have a completely different focus and attitude than on Wednesday.

Here is what happened last time Napoli came to the San Siro:

Napoli is a team just chucky-jam-full of young, talented players. Lavezzi is quickly shaping up to be one of the best. Give him a few years and I think people will be saying "Messi who?" Then there is Hamsik. He is quick and very comfortable in front of the goal. Take your eyes off of him for a minute in your own half and he will be picking the ball out of the back of the net. At the rear, there is Santacroce - he may not be quite ready to play with the big boys, but he is not far off.

For possible line-ups and a look at the game from a Napoli point of view, check out Neil's blog over at the Napoli board.

Mou has called up 21 players:

Toldo has sprained his right ankle so is not available. Joining him on the injured list is Chivu, Rivas, and Vieira.

The line-up will likely go very much like it did against Juve:

I think that the Pana game showed that Figo is not quite ready to start. I think he should be subbed in for a few games until he regains match fitness. Jimenez is back on the call-up list, though I am not sure where he fits into Mou's current 4-3-1-2. Perhaps with Figo and Jimenez back we may be looking at an eventual return to 4-3-3.

For those that like them, here are some statistics ahead of the game. 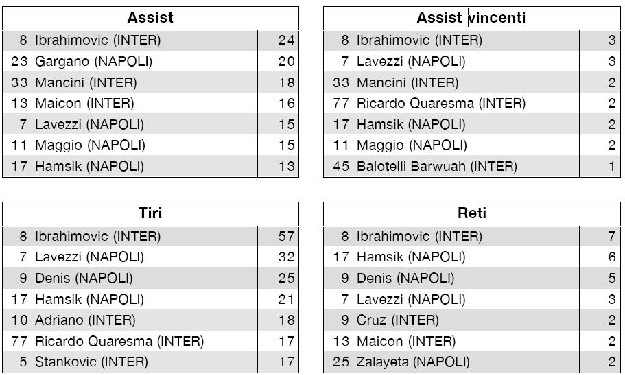 Clearly, Samuel and Cordoba will need to keep their eyes on Hamsik and Ibra needs to work on increasing his goal to shot ratio.

True, Napoli will be a challenge, but for all of their talent, they are a young team with a tendency to stumble away from home. Inter are a team that should be able to take full advantage of any openings Napoli may give - at least I hope they are. We have to assume that Milan will win and Juve already have, so, if we want to keep pace, we must win. For my part, I would very much like to see a 3-0 win tomorrow. We are capable, we just need to keep our heads together and stay organized.