Inter - Chievo Preview and the Continuing Saga of Adriano

Share All sharing options for: Inter - Chievo Preview and the Continuing Saga of Adriano 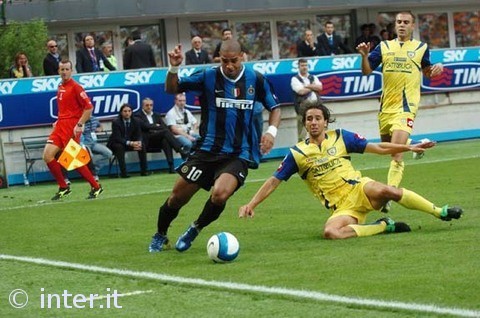 What: Internazionale v Chievo Verona
Where: San Siro, Milan
When: Sunday, Dec. 14, 3pm local time (6am pacific, 9am eastern)
How to Watch: Televised on Fox Soccer Channel, streaming here or here.
Weather: Rain with periods of heavy rain in the afternoon, with a high of 44°F

While all those other teams battle it out to see who will come in second this year, we have more important things on our plate. Sunday, Inter entertain poor sad Chievo at the San Siro. Chievo almost pulled a point from Roma last week, only to be denied by Menez, Roma's hot new thing. Chievo come to Milan with only 2 wins all season, having allowed a shocking 22 goals, and only scoring 7. They sit at 9 points and at the very bottom of the table. Inter, on the other hand, lead Serie A, and, with our closest competitors playing this weekend, we have the opportunity to extend our lead by 2 points. A win against Chievo, though, is in no way a sure thing. They have been known to kill a giant or two and have managed to beat Inter twice: once at home in 2001 and once in Verona in 2003 (both games ended 2-1, and both times Vieri was the scorer for Inter. Strange).

Chievo spent last year down in Serie B so our last meeting at the San Siro was way back in September of 2006:

So this time, if we manage to find ourselves 4 goals up, lets not allow them to get 3 back! Still, I would like Stankovic and Crespo to pick up a goal or two like they did way back when.

I must admit, I know very little about this team. As I scan their wiki, though, I am amazed at the number of ex-Chievo players that now find themselves at top 10 teams. If nothing else, the team must have good scouting staff. As I recall, Chievo have managed to finish in the top 7 a couple of times. This year, they are having a difficult time.

As for line-ups, I will have to resort to La Gazzetta for this. They think Di Carlo will play a 4-5-1:

with Squizzi, Scardina, Morero, Rigoni, D'Anna, Anastasi, and Esposito on the bench.

One player to watch is the Brazilian midfielder Luciano. He actually spent half a season with Inter in 2003, making 7 appearances. He may feel he has something to prove to the club that let him go. I think this just about exhausts my knowledge of Chievo. For a more in-depth look, try the Chievo board.

Mou has called up 19 players:

I was not expecting to see Chivu on the list before next year. He has been training with the squad, and, if all goes well, he may get a few minutes towards the end of the game.

Not surprisingly, Adriano will not be playing. Officially, the club says this is because he sustained an injury during the Werder Bremen game. As to why this injury was not included in the list of unavailable players yesterday, Mou said that he did not know about the injury.

The scuttlebutt in Milan (as told to us from La Gazzetta and our bear on the ground) is that Adriano once again came to training slightly the worse for wear. Or, as the bear put it, "drunk as a skunk." The rumor is that Maicon was also involved and that both were sent home. They are both conspicuously absent in the training photos for Thursday (here and here). Not that that proves anything.

On Friday, the club issued a statement that Adriano had an injury and Maicon had an individual training session. Okay. Could be. Maicon was back in training today and did not feature in today's press conference. He is obviously on the call-up list which leads me to think that he was not drunk. As for Adriano, it seems that he is out for this game and the next. Whether that is because of injury or for disciplinary reasons, I cannot say.

As for line-ups, I think the only real question is who will start up front with Ibra, Crespo or Balotelli?

Mourinho and his team arrived at Inter saying that they were the best and they knew how to manage a group of players. Instead it seems like nothing has changed. We managed Adriano for four months and when Mancini left him out it was for a reason. But when he didn't play, Mancini was always attacked by the media whereas they don't have a go at Mourinho.

To which Mou replied:

Inter's vice coach is Baresi, but Sinisa talks more about Inter than Baresi does. It seems like he's still here as vice coach, but he isn't. As for Adriano, I think everybody deserves a second chance. If he made mistakes in past years with Roberto (Mancini), I don't see why the club shouldn't give a boy a second chance. A few years ago, this club gave the chance of becoming vice coach to a player who spat in someone else's face, so I don't see why Adriano, who has made mistakes, can't have another chance.

I cannot talk to Mourinho about football because he has never played and therefore cannot understand. I did some stupid things in my time and have always paid the price for them. That's not justifiable, but the only ones who can understand are those who have done this job as a player and he never has.

But then he stepped back a bit, adding:

The truth is when I was talking about Adriano I didn't want to accuse Inter of anything. I was actually criticizing the media, because Roberto Mancini and myself had the same problems with Adriano and yet we were called incompetent for taking the same action.

So there. Mou continues to win friends among the coaching staff of Serie A.

Ok, now that that drama is over. we can move on.

This game is an absolute MUST WIN for Inter. We cannot take Chievo or this match lightly. We have the opportunity to pull three more points ahead of either Juve or Milan, or hopefully, two ahead of both (0-0 draw!). We simply cannot afford to squander this chance. On paper, we have by far the better team. Even our "second" squad is better. We all, know, though, that football games are not played on paper. We must take this opponent seriously, and, as I said above, if we are so lucky as to go 4 up, WE MUST NOT ALLOW THEM TO SCORE. As I write this, I am watching Napoli kick the stuffing out of Lecce, adding pressure to both Juve and Milan, and by extension, our glorious team.

I was half expecting Marco's mask to have the number 23 on it. 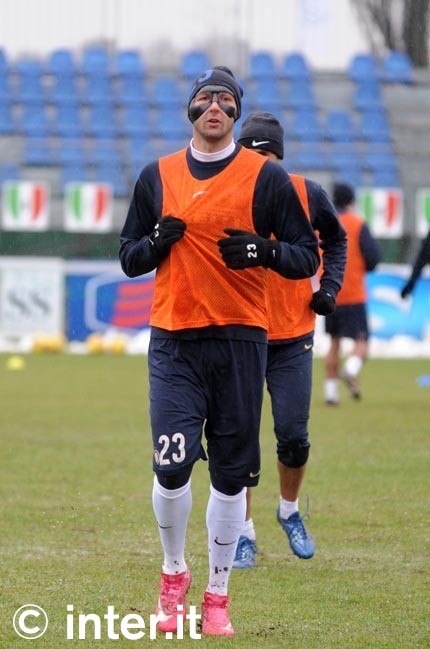