Share All sharing options for: Inter 2 - 1 Napoli: Back on Track 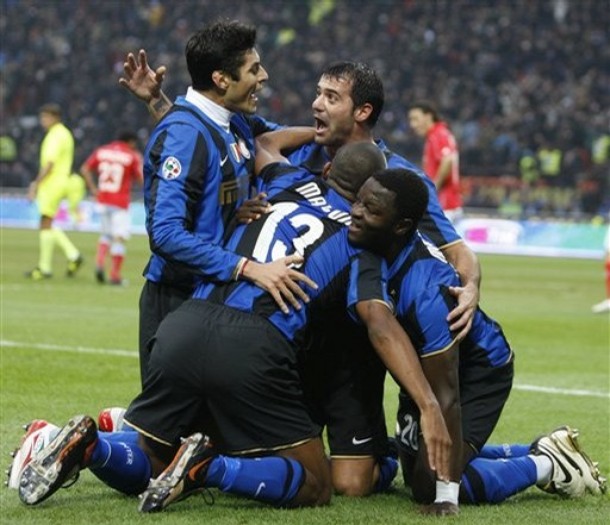 Thank goodness that is over. After that game (which shall not be named), this matchup had me sweating bullets. I really really really did not want to have to write the "we suck but that's ok" post again. Luckily, Inter showed up to win and I dont have to. Instead, I get the "Woohoo, we are 6 points up" post (thank you very much Palermo!).

This game brings Inter up to 5 straight wins in the league, our last Serie A draw was a month ago against Fiorentina. Basically, Inter came out on the attack and took a 2 goal lead pretty early in the first half (16th and 25th minute). Lavezzi was able to pull one back for Napoli 10 minutes after our second goal. For the last hour, though, Inter were able to defend the lead - no easy task with Napoli players running at the defense and drawing fouls in dangerous places. On the other side, Iezzo was forced into a couple good saves in the second half, most notably from Ibra's blistering strike to the near post (60th minute) and Zanetti's fast break at the end of the game (87th minute). At the final whistle, the first-half scoreline stood and Inter go to 33 points, 6 points clear of Juve and Milan who are both at 27.

Mourinho, while a little miffed at Inter's lack of goals, was overall "satisfied" with the performance, saying:

We controlled the match and played intelligently. I'm very satisfied with this victory and my players' performance, but we can play better. We have won our last three league matches with great merit. The team is playing very well and we're very compact. We're not scoring three, four of five goals a game but we're on the right track to getting as many points as possible until the Christmas break.

Here are the highlights (notice Cambiasso's funny little pre-match hopping ritual as he enters the field):

For the record, I do not think Lavezzi should have been carded for diving. I dont think it was a penalty, but I think he legitimately tripped. Another strange booking was when Aronica and Zanetti were shown yellow - presumably for dissent. Rosetti had a poor match.

"One of these days, Cannavaro, Pow, right to the moon" 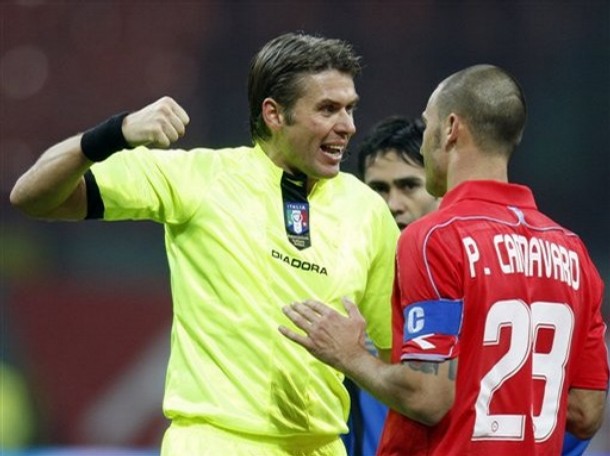 In the comment thread from the last post, there was some discussion about Ibra and his (in my opinion) relatively poor performance on Sunday. The point was made in his defense that, for a striker, his work rate is very high, especially in tracking back to retrieve the ball. This got me thinking and playing with all the fun match metrics tools over at ESPN (I have no idea how any of them are generated and cannot vouch for their accuracy).

This is the "Heat Map" for Ibra during the game. It displays where he was involved in the play. The color shows where he touched the ball - the darker colors represent more touches. 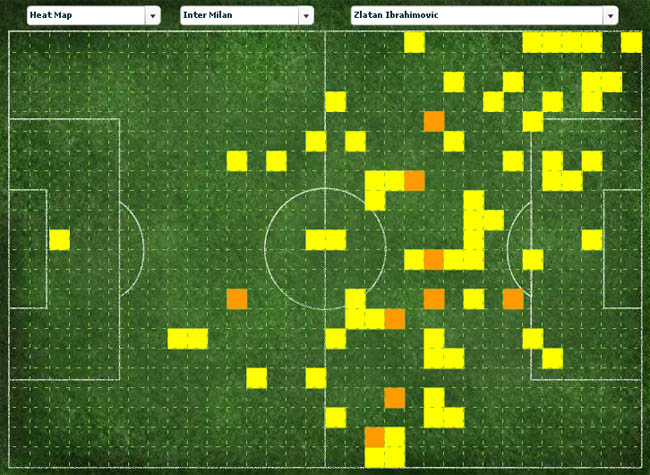 As we can see, Ibra really got around. He was even tracking back into our half. Ibra's workrate becomes even more apparent when his map is compared to Cruz's heat map: 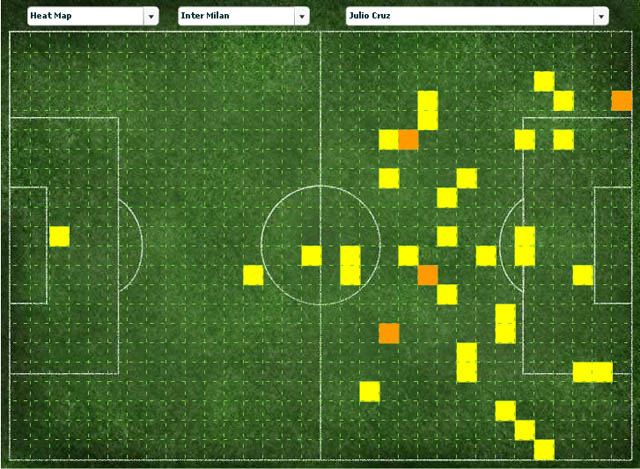 Cruz tended to stay much higher on the field, only straying back once or twice. So, even though Ibra was not his typical god-like self, he was no slouch either.

Another tool I found interesting is a map that shows every player's average position on the pitch. Here is Inter's (Burdisso and Jimenez should probably be discounted due to short playing times - small sample sizes skew data): 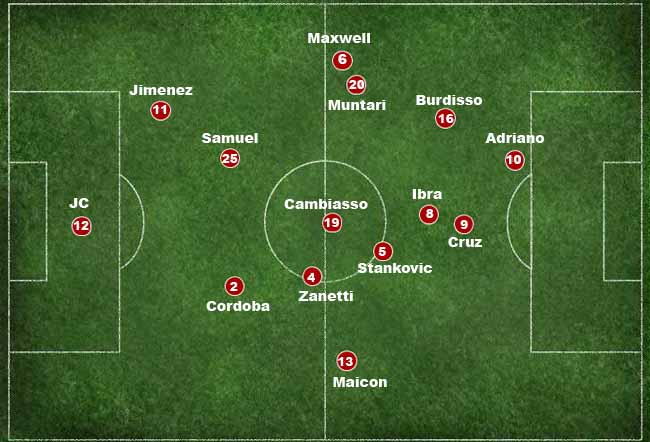 Notice how spread-out the players are across the pitch. Napoli's map, by comparison, showed almost all the players bunched in and around the center circle. Play did tend to drift to the left, but I wonder if that is not because Muntari was directing traffic through that part of the pitch. Very interesting. Now I will probably have to go back and play with this for the rest of Inter's games this season just to see if any patterns emerge.

Inter now have a whole week off to train ahead of the match against Lazio in Rome next weekend. Lazio, on the other hand, have a Coppa Italia game against Milan mid week. That may well work in our favor. After Lazio is our final group-stage Champions League game (against Werder Bremen), then home to Chievo. Boy, this first half of the season has sure gone by quickly! I simply cannot believe that it is already the holiday season.

In other news, it looks like Crespo is not going to Real Madrid. What's more, he may have been thrown over for Tevez.

On the Balotelli front, Mourinho says that Balotelli will not go out on loan come January:

"In January, he will absolutely remain here. He must only think of training himself in a good way. He must work more. This is also a responsibility of mine. We must work together and better. He's really young, he has big professionals in front of him and, from a person who is nothing yet, I can't accept he works less than them. He must work more."

I have to say, it makes sense to me. The kid, as talented as he may be, has to jump through the same hoops as everyone else. Fair is fair. I am glad to see, though, that Mou is acknowledging that he needs to put some of his time into working with the kid.

For all you Javier Zanetti fans out there (and really, who isn't), La Gazzetta has a yummy little interview with him today where he hints that he will go into the Inter management when he retires. I knew he could never leave us! I also love that he calls himself "the bionic man of Buenos Aires." 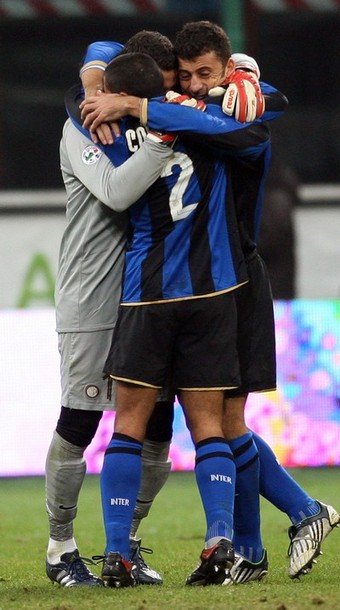