For whatever it is worth, Inter go into the break as the Winter Champions with a 6 point lead over second place Juventus. Controversy reared its ugly head again as Saturday's winning goal was scored from an offside position. Oh well. It has happened before and it will happen again. I really dont want to get into the whole replay thing... Either UEFA or FIFA will introduce it or they wont. I am against it simply because it is a slippery slope and if the game wasn't as spontaneous and flowing as it is now, I just dont think I would like watching it as much. That, and I loath American football so anything that makes the Serie A like the NFL would kill quite a lot of my enthusiasm for the sport. But the governing bodies will do what they will do and I will either adapt or turn the tv off.

Here are the obligatory highlights:

Really, the offside goal was the very least of Inter's problems against Siena. Both Maxwell and Julio Cesar made some glaring errors in defense, and, frankly, the score could easily have been Siena 2 - 1 Inter. We were amazingly lucky. Jimenez was not at his best, but after such a long layoff, it is to be expected. Balotelli was also having trouble finding his groove on the pitch and gave possession away a bit too often for my taste. He wasn't disastrous, though, and I suspect that my expectations for him are set a bit too high.

It wasn't all bad.

Cambiasso once again showed the world how it is done. He was practically perfect in every way. Figo looks better with every game. Quaresma, when he is not getting hacked down, also showed improvement. Inter had more possession than Siena (53% to 47%) and more shots on target (7 to 2). When Siena equalized, Inter never stopped trying for the winning goal - they never settled for the draw. Or, as Mourinho said:

"I knew the limits of my team tonight but I'm satisfied with their attitude and concentration, which they kept high until the end. Winning was a great feat for us because we didn't play well and we know it, but we still brought home three points and this was the most important thing."

Besides the win, the best thing from last Saturday was Maicon's double and his celebrations after.

Mou came out and celebrated with him under the fans and picked up a little flak for it from the media (this also has the moviola):

I dont care if the press were shocked, I found it touching. I want a coach that is passionate about the game and if that means occasionally celebrating with the players, then go for it.

So, to recap:
- we didn't play our best game but we won anyway. Hooray.
- Maicon got a little bit naked and Mourinho hugged him. Hooray.
- Inter is still on top. Hooray.

After Christmas I will have a more proper post up. I want to do a sort of year-end review type thing with player ratings and such and would love to have reader input. I have figured out how to do the polls (which was actually quite easy) so I will get one up for the dealing with the winter mercato.

But all that will have to wait. First I have to wrap everyone's gifts and cook huge meal for tons of people.

This picture has to get posted simply for the lighting: 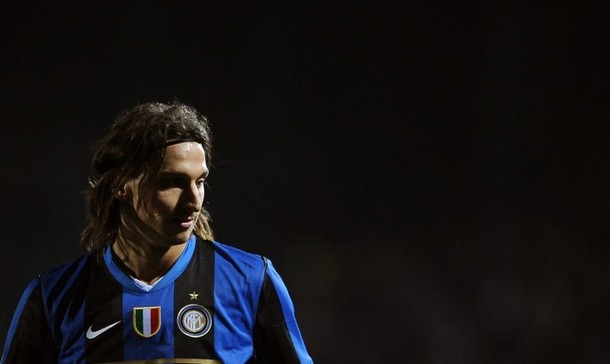