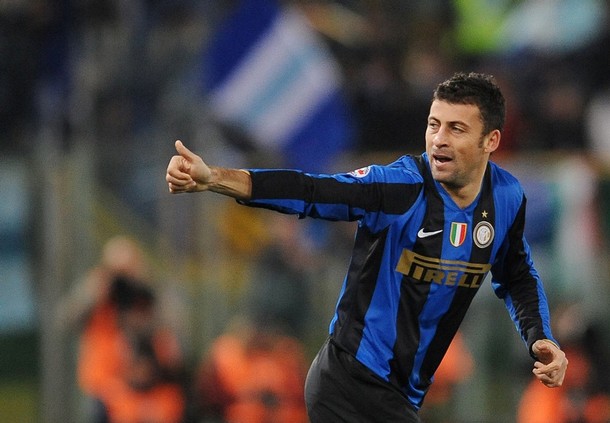 It is a busy week, for Inter and for myself, so this post will have to do double duty. First of all, once again, the Olimpico in Rome simply hemorrhaged goals for Inter. Granted, Lazio helped with an own-goal, but those count just the same. There was a bit of controversial refereeing, and some terrible officiating from the linesmen, but, in the end, Inter take home those three vital points that maintain our lead against Milan and Juventus. Plus, with the 3 we picked up today and the clean sheet, Inter now have the highest number of goals scored (25) and the fewest number of goals conceded (8).

Now lets talk about the game.

For those of you that missed the game, here are the highlights and some post-game interviews:

(thanks Chris for the head's up on the new youtube settings.)

For me, this match was all about Walter Samuel. Not only did he score in the first 2 minutes of the game, but was able to put a cap on Zarate. True, Zarate is a bright young talent, but Samuel has seen all that before. At moments, the poor kid looked a little bewildered. Unfortunately, there was an injury scare with Samuel: during the game he seemed to have suffered a thigh strain. He finished the game, though, and there is no word of any injury so we may have dodged that bullet.

Julio Cruz was not so lucky. He suffered an injury early in the game and had to come out after 37 minutes. The good news from Appiano Gentile is that it is a left hamstring strain which Inter doctor Franco Combi has characterized as "nothing particularly serious." Still and all, it may keep him out of action until after the break.

Cruz's injury opened the door to Crespo who played the rest of the game. Poor Crespo. He worked his little heart out. Really, I think he tried as hard as he could. Unfortunately, whether it is due to lack of play time or just a general drop off in form, his hardest is just not good enough. He did well to get past Lazio's defense in the dying minutes of the game, only to force Kolarov into an amazing tackle. 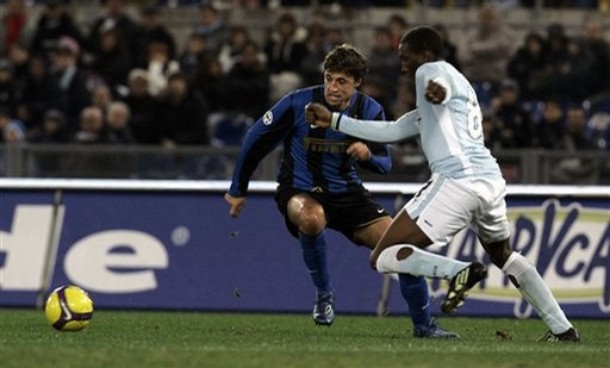 The game was not without controversy. Ibra's goal was offside. It wasn't by much, but being offside is sort of like being pregnant - you either are or you're not. Ibra definitely was. The linesmen had trouble with the offside rule all match, though, stopping play a number of times when they should not have. Then there was a disallowed goal against Lazio. The referee blew the whistle to stop play on a Lazio free kick. Unfortunately, Kolarov thought the ref was whistling play on. He took the kick and beat Julio Cesar only to have the ref call the goal back. Then, to make matters worse, when the freekick was retaken, Cordoba clearly charged down the shot and probably should have been booked. He wasn't, and play continued.

For the record, I dont care which team shenanigans like this help or hinder. I dont like them. I dont want to win that way, nor do I want to loose. I dont think instant replays are the answer, but I do think that something should be done.

In the end, Lazio played a more attacking game than Inter (see the stats above). Our defense was able to hold it together, though, and Julio Cesar made a couple great saves. All and all, this was a real team effort. This season's Inter has really started to gel and our moral and confidence could not be higher.

Alright, by some mathematical luck, we have qualified for the knock-out round in the Champions League. But 8 points? Really? It is embarrassing. I hope the squad go to Germany to win this time, because I want first place in the group.

Mou is taking 21 players to Bremen:

Balotelli is back on the list after a great game with the Primavera league on Saturday. He scored 2 goals and generally caused the all sorts of havoc for Treviso. Mou was clearly impressed.

Bremen, for their part, are a bit of a Jekyll and Hyde team. They beat Frankfurt 5-0 with a hat-trick by Pizarro, then go down 1-0 against Karlsruhe last weekend. What is more, Pizarro got himself sent off at the end of the game. The card, of course, does not carry over to the CL, but it does show that Pizarro can be rattled. Diego was also involved in the scuffle and his conduct is under investigation.

In the Champions League, Werder Bremen have shown a scrappy tenacity. In their last game they were able to claw back from being 2 down in the last 20 minutes of the game and finish with a draw.

Bremen are playing for pride and a UEFA spot at this point. Someone can check my math, but with 4 points, I dont think there is any way that Bremen can finish second. In order to continue in Europe they are going to have to win and hope for third. We, on the other hand, have already qualified. I just hope that Mou has helped the squad to see the necessity of finishing first in the group. To do that, we MUST WIN. No more of this terrible form in the CL. We may think that we are better than the other teams in our group, but our form against them says otherwise. Of course, there is always the theory that this bad form in Europe is a cunning plan to make other CL teams underestimate us for the knock out stages. Yep, that must be it. It is a hustle. Hopefully we are done with the con.

And no one better lay a finger on Cordoba - he is all Ibra's! 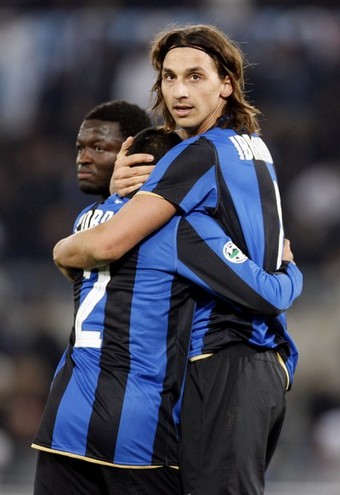