Inter's "Golden" Boy Rakes in the Cash and Other News

Share All sharing options for: Inter's "Golden" Boy Rakes in the Cash and Other News 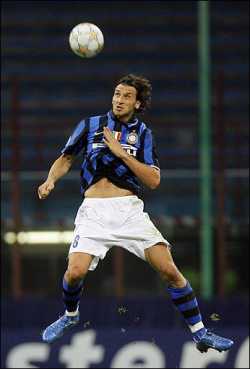 Zlatan Ibrahimovic has renewed his contract with Inter Milan for another 5 years. Yep, he is ours until 2013, but at what price? Well, it turns out at a HUGE price. On his last contract, he was making €6 million per season. Starting next season, he will be netting €11 million, with a bump up to €12 million the year after. Who in the real world gets to double their salary?

To put this in perspective, Kaka makes €9 million a season and Christian Ronaldo makes €8 million. This contract makes Ibrahimovic the highest paid player in the Serie A. To help us understand what this means in real terms, Goal.com has broken it down for us: if Zlatan stays to collect the whole €12m, he will be making €231,000 a week - at today's exchange rate, that is $359,300.56! The rumor is that Barcelona was ready to offer him €10 million so Moratti had to pony up or watch him walk. I hope he is worth it. No wonder Moratti is having to drag Mancio through the courts - he needs every cent he has for Swedes! Now, Ibra better live up to all that potential we are always hearing about. Oh, and no injuries at Euros!

What does this mean for next years squad?

There are rumors that Moratti has given Mourinho a €120 Million budget to build a team that can take the Champions League next season. That sure seems like a lot of cash. I dont expect we will see a complete overhaul of the squad, but the addition of a few key players. Moratti says:

Next season we will base everything around the team we have at our disposal so we will be relying on Ibrahimovic, Zanetti and Cambiasso. We will not revolutionize the side as we have plenty of up-and-coming players like Balotelli in our team. 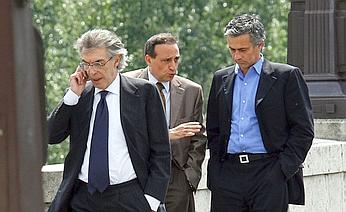 Speculation is that Moratti will officially name Mourinho as Inter's new coach at a press conference on Tuesday in Lisbon. This would be very, very good news. Without settling the coaching issue, we cannot move forward in the transfer market. Compared to Juve and Milan, we are falling woefully behind (though at least we dont get a frowny face like Roma).

On the up side, Moratti is finally feeling like a human towards Mancini. He says:

Humanly I was very sorry to have to explain the decision to him. I realise that this is the time when we seem all bad. When you decide a separation, especially after a period in which there has been a strong passion, the worst days are always first. I know how important Mancini is to Inter and I have not forgotten what he did with us, especially in the last two years. It was good and I told him, as so good that we won a beautiful Scudetto.

Apparently the dispute will go to tribunal with a €12 Million payout. - I hope we can settle this quickly and get down to business.

For a very amusing take on what Jose Mourinho may experience as Inter's coach, see Gabriele Marcotti's column in The Times Online. I think he makes some valid points - check it out. I would post the whole thing here, but that seems tacky. 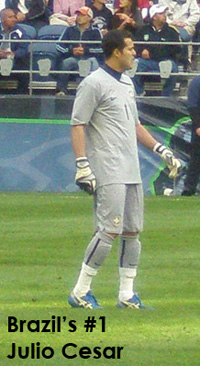 Yesterday, the national team of Brazil played Canada at our very own Qwest Field - the current home of the Seahawks and the new home of the Seattle Sounders FC. With the team were three of our players: Julio Cesar, Maicon, and Adriano. Other Serie A players with the squad were Pato and Doni. Pato saw about 10 minutes of play; Doni warmed the bench. Amongst the scantly clad Brazilian girls in my area, Pato was the clear favorite.

I had front row seats (literally) so was about 20 feet from Maicon for the whole first half. I apologize for the crappy photos, but the game was distracting me. Adriano picked up about 15 minutes of play, and, as you can see, he is quite fit. He played his time pretty well, and I was pulling for him to score. He had a couple nice tries and one particularly cheeky shot that was only about a foot from scoring.

It was nice to see that mine was not the only Inter jersey in the crowd; I think I spotted about 4 others. Also, Materazzi (the name on the jersey) drew mostly positive reactions. Frankly, I was surprised anyone even knew who he was. There was only one guy who did not like him - from what I could tell, he was a France supporter and was still bitter about that whole Zidane thing. Still, I am glad to know that I am not totally alone out here in the wild wild west. At least 4 other people like Inter enough to spend money on a jersey and be seen in it in public.

As you all know, Euro 2008 is right around the corner. The nice folks here at The Offside and World Cup Blog have set up a bracket-style predictor contest where you can put your prediction skills and national team knowledge to the test and win some great prizes. Basically you pick how you think the Euro 2008 groups will finish and then pick which teams are going to get to which round of the tournament, including a winner. You get points for correct predictions.