Share All sharing options for: Ferragusto in Lisbon - Eusébio Cup 2008 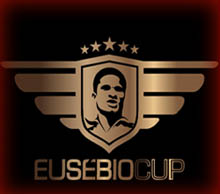 This Friday is the last stop on Inter's whirlwind summer European Tour. We travel to the Estádio da Luz in Lisbon (that is in Portugal, by the way) for the very first fixture in what will be an annual event. The tournament is named for Eusébio da Silva Ferreira, a Benfica living legend. He played for the team between 1960 and 1975, scoring 317 goals in 301 appearances. He has a string of honors as long as your arm, including being selected as the Portugal's most outstanding player of the past 50 years (UEFA Golden Player of Portugal). So the guy has cred. If you are wondering why Inter, apparently it is because we employ Portugal's prodigal son: Jose Mourinho. Oh, and I guess they like Figo and Pele. When asked about the selection, Eusébio said this:

I think Internazionale was a good choice. I have played against them and knew of their interest in signing me back in the day. Today, it is a club coached by a Portuguese (José Mourinho) and they also have Figo and Pelé. I hope it will be a great game and that the cup will stay at home, because this is the first edition and has a lot of value.

Okay, so enough of the background. Lets take a look at the game.

For this part of the post, I would like to give a huge thank you to Greg at the Portugal board. He was kind enough to supply me with a little rundown of Benfica as a team and what/who we should expect to see. 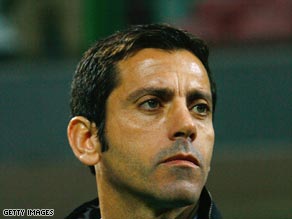 First of all, just like Inter, Benfica has a new coach this season, Quique Flores, with something to prove. (Plus, he looks a bit like Al Pacino as Tony Montana which is pretty bad-ass.) Flores has a squad of 26 to choose from including Quim (Joaquim Manuel Sampaio Silva), the usual #1 for the Portuguese national team, who has just recovered from a broken wrist.

Almost a third of the squad is new this year (10 players!). This may work in our favor as in the case of new center-back Sidnei who is apparently still adapting to new surroundings, or, it may make some players much more motivated on the pitch. I believe this will be the case for Carlos Martins who was Quique's first target upon coming to Benfica. Martins has been tasked with controlling the midfield and will be looking to show the club that the the coach's faith in him was not misplaced.

Benfica's last game was their presentation for the next season. They played Feyenoord Rotterdam, beating them 1-0:

Benfica have been in a bit of a slump for the last few years, but for the upcoming season, club president Luis Filipe Vieira has opened the coffers and accumulated what he calls “their best squad in decades." Vieira has stacked the midfield with attacking players, and brought in a new coach who "is known for placing emphasis on a watertight defense." On the other hand, many of their players are new to the squad and may not have really gotten that connection that teams need to be great - that 6th sense of where your teammates are on the pitch. In the end, despite their upgraded attack, I think we can take them.

As I said, this game is the last of Inter's summer friendlies and the last chance Mourinho has to tinker in a safe place. Jose is very popular in Portugal, to say the least, and will want to put his best foot forward. In a sense, this is a homecoming for him: Benfica was the first club he managed. Of course, it only lasted a short time (nine league games) - Jose quit after the club refused to extend his contract. Although he has met Benfica many times, with many different clubs, I suspect there is always something to prove when he plays in the Estádio da Luz. Sort of like when you run into an ex girlfriend or boyfriend - no matter how often you see each other there is always that "see what your are missing" vibe.

This is a bit of a conundrum. On one hand, we want to make a good showing, on the other, in the words of Mourniho: "We dispute for the Italian Super Cup in a few days and so play with one foot in front and one behind."

Given that, and Adriano's recent injury (damn it!), predicting the starting squad is not coming easily. Still, I think it may go something like this:
Toldo
Maicon, Cambiasso, Burdisso, Maxwell
Pelé, Stankovic, Muntari
Figo, Balotelli, Ibrahimovic

With half the team out injured, who the hell knows anymore!

As I am sure you all know, we won our last friendly against Ajax (although came in second in the tournament), 1-0 with a goal by Adriano:

In the last game, Ibrahimovic was beginning to find his legs again, and with the number of posts we hit, I hope the score will be at least Inter 2 - 0 Benfica (sorry Benfica, but we must crush you. Dont take it personally). I am looking for Inter to get back into scoring goals this game - lots and lots of goals. The stadium should be packed, not only as local fans will want to check out their new team, but (in Greg's words), Mourinho is a God in Portugal. Eusébio is sure to be on the premisis - after all, someone has to present the trophy.

Lets just hope Zanetti and Mourinho have as much fun in Lisbon as they did in Amsterdam: 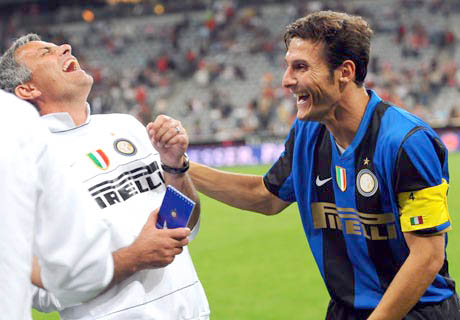 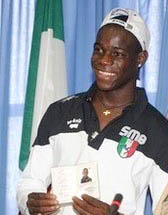 Balotelli is 18 and officially and Italian. Afterwards, there was a press conference. In it, he spoke briefly of the immigrant's life in Italy:

Q: Your mother said she has been through some difficult times over the years.
A: Yes. Life in Italy is much harder for a foreigner than for an Italian. I could give you many examples, like when you're forced to stand in endless queues to get into the offices of the police headquarters. I did it once with my mother and once was enough for me. She has done it tens of times for me. It's not a nice thing, knowing that I was born in Italy and had never lived outside Italy. But this is certainly one of the minor inconveniences.

And his Azzurri aspirations:
The national team is something you feel inside yourself. It's superior to everything.

Then, when asked about his impressions of Lippi whom he met while playing in the Carnival Cup with the Primavera team:
He seemed just like any other person. He was walking, I was walking.

That response actually made me giggle/snort. Talk about your cavalier attitude.