One More Trophy & Other News

Share All sharing options for: One More Trophy & Other News 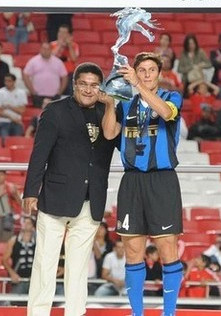 Since I am a little, erm, late with this post, most of you probably know that Inter took home the Eusebio Cup after our game against Benfica last Friday. Although the score finished 0-0, Inter finally went ahead 5 to 4 on penalties. Mourinho was pleased with the results, and was somewhat sentimental over the association with Eusebio, saying that he would ask Moratti if he could keep this cup in this office.

The fun at the Stadio de Luz began with a little demonstration of power and agility. As the teams stood before the game, Benfica released an eagle that swooped and soared around the stadium before landing on a perch with the Benfica team crest. It was super cool. We totally have to figure out something like that for the San Siro. The fans may not react well to snakes, though, and unless it were an enormous snake, it would probably not be as impressive as an eagle. Something for the marketing department to work on.

Benfica came out attacking and I thought they would score in the first 5 minutes. Benfica almost went ahead in the 14th minute with screaming strike from Cardoso. Luckily for us, the ball hit the woodwork and Inter cleared. It was a very close call. Inter's big chance came towards the end of the half when Figo could not connect with Ibra's cross in front of goal. Oh well. And even though he missed the cross, I think he still has something to contribute. When he left the field, the fans gave him a standing ovation. Very classy.

The second half saw a few more chances for each team but very few on target. Poor Ibra. He had maybe 5 chances on goal but were wide on all of them. Then, to add insult to injury - Benfica's keeper stopped his penalty at the end. The good news is he played a full 90; the bad news was all the head shaking and muttering after missed opportunities. I was hoping for a couple goals, but at least we kept a clean sheet and there were no further injuries. Here are the highlights:

I suppose if we are still joking after the game, it probably went just peachy. 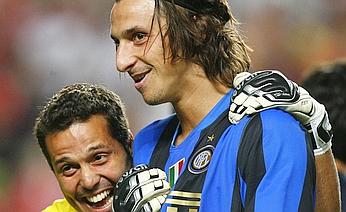 Calciomercato is reporting that Roma have made an offer of 10 million euros for Suazo. Crespo, on the other hand, does not appear to moving to Rome. Negotiations have broken down between Lazio and Inter over salary (who pays what percent) and loan fees (Lazio dont want to pay one).

Quaresma is still in the mix. Although both Moratti and Mourniho have said that Inter's mercato has closed, Branca is reported to be in Portugal negotiating a deal that supposedly will include Pele in exchange. Of course, now Real Madrid are interested so who knows what will happen if they start throwing the euros around.

Also, there is some talk of Dacourt going to Sampdoria (?!?) and Branca is looking for a Serie A team to take Jimenez on loan.

Six Inter players have been called up for international friendlies on August 19th and 20th.

In addition, Pele has been called up to the Portugal U-21 team for a game against the Czech Republic on August 19.