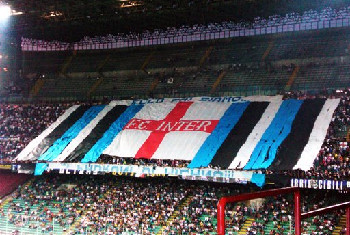 Ok, so last year this tournament did not go so well for us. Inter lost to Roma 1-0 (goal by DeRossi). Still, since its inception in 1988, Inter has played for this tournament 5 times, winning 3 of them, which is not so bad (Milan have played 8, won 5; Juve 7, won 4; Roma 4, won 2).
-
{photo shows the coreografia at last year's game}
.
Officially, this is the first game of the 2008/2009 season, and I am sure Mourinho and the gang would like to start with a bang. As we all know by now, Mourinho likes to win.

See, wasn't that nicer than that poopy old game last year (although a bit long)? Alright, now that we are all sufficiently pumped, lets look at the teams.

I wont spend too much time here, as I am sure Chris will cover this on the Roma page. Lets just say that Roma will want to win this every bit as much as Inter do. They want to show that although they did not win the Scudetto last year, they are are prime contenders this season. Also, Roma's recent bereavement may give them that little extra oomph as they want to "win it for Sensi." Roma have a new Brazilian forward Julio "the beast" Baptista who I am sure is looking to prove himself in the Serie A (how stupid can I be? last season he had 4 goals in 31 appearances for REAL MADRID). Like Inter, Roma have their fair share of injuries, and while it is thought that Totti will see some play time, Doni and Taddei are maybes.

Probably the biggest hurtle for Mou coming in to this game is our ongoing injury "crises." As far as I can tell, Vieira, Chivu, Cordoba, Adriano, and Samuel are still on the injured list. Cruz and Rivas are maybes. Ibrahimovic will probably see some play time on Sunday, although I highly doubt it will be for a whole game. As for who will take his place in attack, I have not the first clue. Hopefully Mourinho's press conference tomorrow will answer all questions.

Without a doubt, Burdisso will start. Who will pair with him is the question. Il Corriere dello Sport thinks that Rivas is a strong possibility, although Mou may decide to play Cambiasso in central defense and give the others one more week of recuperation.

Assuming Cambiasso in defense and Mourinho will play 4-3-3.

with the possibilities of Balotelli, Jimenez, and Pelé.

Lets hope nothing goes wrong at the back, because we are almost out of options there. I had hoped that Samuel would have made an appearance before now, but if he is not ready, so be it. Materazzi wanted to be ready for this game, but it does not look like that will happen, either.

What to Watch For

Ibra is looking to score. You could tell by his body language (and muttering) at his missed opportunities during the Benfica game, Ibra is not happy with his past performance. He needs to score. Also, although Mancini has said he will not celebrate a goal he scores against Roma (out of respect), I am sure he would like to put one in the back of the net. Jimenez and Balotelli are both looking for a starting place and will be itching to prove their worth if they take the field.

With the return of Totti and the death of Sensi this may well be an emotional game for Roma. It is clear that they will play all-out for the win. I, on the other hand, am much more concerned with player well being and the upcoming Serie A and Champions League games. We would all like Inter to make a good showing, and, if possible, kick Roma's ass all the way back to the capital, but not at the expense of players' health. First and foremost, I want everyone HEALTHY for the start of the season, and if to do that Roma must win, so be it. Still, I think we can totally take them. Who is up for another clean sheet?

As part of the recovery process for those players coming off of injury, Mou has scheduled a friendly for Friday, Sept 5 against FC Locarno, a second-division team in Switzerland (obviously from Locarno).

Il Corriere dello Sport is reporting that Joãozinho (Joao Bueno de Camargo, born December 16, 1990), yet another new Brazilian wonder kid, is trying out for a few days with the Primavera team. The trial will last until August 27th when Inter will decide whether or not to pick him up, presumably for the Primavera squad.

Quaresma is still up in the air. I am starting to get a bit peeved over this and don't want to talk about it. Suazo is still almost at Roma. Crespo is either moving to Sampdoria or Lazio. Whatever. I am so tired of "almost" this and "any day" that. August 31st will be a welcome relief.