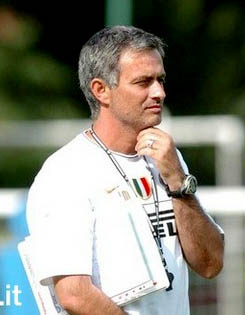 I am tired of endless speculation about who may or may not be coming or leaving in the waning hours of the summer mercato. We will all know soon enough. Also last Sunday's Italian Supper Cup game has already been reviewed on this board (here and here) and discussed ad nauseum, so I decided to post an article on Mourinho's tactics for the upcoming season. The article is from the Inter Magazine, June 2008 (pages 19-21), and since this magazine is not available in the US or by subscription, I don't think the Inter marketing people will be upset.

At Mourinho's School
"The tactics come after - says the new coach of the Nerazzurro - which is especially true for the Cup...".
by Edoardo Caldara

"Uh mamma?" Someone will say, "But it is the coach sure ?!?!". More than sure, we did a press conference wrapping up in half an hour television, radio, newspapers, those in the industry, the curious, fans and so on. But with care, with care not to fall into the trap of misrepresenting the script.

Of course Mourinho is not naive, a successful man that has done so much in not even 50 years cannot be, his opinions will be contextualized and explained in the lines below. Meanwhile, referring to the concept that he knows the football culture of the countries where chooses to coach, he believes. ..

"Definitely the most important are the tactics. I Once said: Barcelona could not be champion of England and Chelsea could not be in Spain, clearly no?"

Maybe. Then, when the journalists present, especially in the talks following the press conference, have requested clarification about his tactical system, so dear to us theoretical Italians, he replied:

Everyone stop, you understood this? The construction of dynamic triangles. Ergo, moving to find the exchange, better if geometric and logical, kicking, in order to circumvent the marking and the opposing players. Or, more likely, the triangular placement of the players on the field, continuous and incessant movement. Nothing more to say. But he is not finished.

"Systems with a few lines of play are more difficult. With the triangle every player has a rational occupation of the space and it is easier to handle ball possession."

But here are the goods for the historians who are interested in the biography and tactics of the great masters such as Mourinho. Everyone who studies the application of tactics to Chelsea's game in recent years, unfortunately for these historians, they must reevaluate their beliefs with this admission:

"After three years, I admit that the tactical ideas coming out at Chelsea is not my true philosophy."

Yes, but then, what should we expect for next season?

"Italy is more tactical than elsewhere. When I arrived in London, Chelsea was the only team training to use the 4-3-3: players between the lines, wings that change their position during the game. Today also Arsenal and Manchester play this way: ball possession and working methods have changed. Regarding the application at lnter, well, I like to think of using the game with bands, to create spaces, to seek the depth there. It is not said that two wingers must be purchased, I like the players that are employed....".

Words that undoubtedly will be liked by the President, but a few purchases we think, obviously, to improve wherever they can.

Ultimately we can already summarize Mourinho's thinking with a simplistic analysis of its previous forms, 4-3-1-2 in Portugal with Porto, the already mentioned 4-3-3 in London, pointing out other peculiarities of the lusitanian coach: great attention to the work, studied in detail, attention to the construction of the defense and attack on the pitch, often the best sections of his squads, and in the leagues where he has worked. A great constructor of theories about the adversary, studied and dissected in order to find weak points and situations to utilize in the match.

Constant care, finally, even for situations when the game has stopped. Dead-balls, corner kicks, throw-ins, and free kicks do not escape the system of Jose Mourinho, and like the other parts, wants the tradition of the great coaches in modern football, now called upon to manage a complex system of play, quick and very good-looking physically, with a consequent speed of application to be calculated in each individual task.

But more important than the considerations set out above, is, as always the words of the technician already champion of Portugal, England, and Europe:

"Often we coaches are not important, and usually we play the game first when we take to the field to prepare, and after, when the ball has stopped. Almost never during the ninety minutes. The coach must know how to change, must be able to transmit calm, be a leader, a psychologist, a manager of human resources. A coach that is a tactical superman, one that only knows football, can never be, completely, a great ".

I have done my best to translate the text into English, though, frankly, my Italian is not quite up to it. Also, I am sure that some of the idiomatic expressions went right over my head. So, if you want, drop me a note in the comment section and I will email you a copy of the article in Italian so you can translate it for yourself.

And a special thanks to Ursus, who was kind enough to send me the magazine all the way from Milan. Ursus, you totally rock!