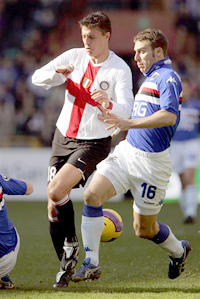 Here it is, what every calcio fan has been waiting for since May 18th, Matchday 1 of the 2008/09 season. For the Nerazzurri, this means Sampdoria v Inter at Genoa and our first rung on the Scudetto ladder (number 17!). Not that this will be easy. Last season Samp had an amazing home record: out of the 19 league games they won 10 and drew 7. For those of you that dont want to do the math, that means they only lost 2 home games last season. Still, they could not beat us: we trounced them at the San Siro (3-0) and drew (1-1) in Genoa. Can we beat them this season? You bet. All we need is determination, thoughtful playing, and some work on our freaking set pieces!

As you can see, there are some welcome surprises on the list: Cordoba and Materazzi are back from injury, as is Cruz. Dacourt is also a surprise as I thought he was being shopped around, and Bolzoni is clearly being groomed for the Champions League. Cruz is exciting as he almost always scores a goal or two (or 19 last season). So, given the call-up, what can we expect to see on the pitch?

Assuming a 4-3-3, it may go something like this:
JC
Maxwell Materazzi Cambiasso Maicon
Muntari Stankovic Zanetti
Mancini Ibrahimovic Balotelli

Or at least that is what La Gazzetta thinks and it seems to jive with what Mourniho said in the press conference today:

Mazzarri has called up 19 for Saturday:
Keepers: Fiorillo, Mirante.

La Gazzetta thinks they will will play 3-5-3: 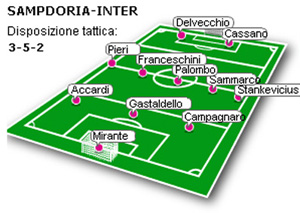 Ok, so these guys are without a doubt a team to be reckoned with, especially at home. For a great rundown for the team, see Francesco's preview and Alberico's preview of the game ahead.

Samp's main asset is their troubled wonderkid, Antonio Cassano (although I think I read somewhere that he is in love and feeling much better). He is dangerous upfront, especially with our slightly cobbled back line. In addition, Mazzarri is no slouch, and after the Super Cup, he will have had time to analyze Mou's new tactics and come up with a little something of his own.

Here is what happened last year at the San Siro:

And when we played them in Genoa, Cassano scored early in the second half (a real beauty, as I recall):

but Crespo answered 10 minutes later to equalize and continue our unbeaten record:

What we learn here is that Cassano is dangerous and that we need to play to the whistle.

I think it will end Inter 2-1 Sampdoria. They are a good team, but we are a team bent on world domination (or at least European domination). True, we may have some defensive issues (Marco, I am looking at you) but between Cordoba and Zanetti, we have cover should problems arise. So far Mourinho has not put a foot wrong - if he says that Marco is ready and able, I have to believe him. Also, the squad is confident. Mou said today that although a draw would not be problematic, we are going to Genoa to win.

So, I say lets go Inter! It will take work, but we can most definitely come away with 3 points. The team showed they can successfully implement Mourinho's tactics - all we need to do now is keep it up for a full 90.

Suazo has gone to Benfica on loan. This is good news for us as it frees up vital capital for a certain Portuguese winger we have had our eye on this summer.

Also, Balotelli has been called up for the Azzurrini. Good Job, Mario!

And remember, with Jose we are always one step ahead!

LATE BREAKING NEWS
(or early, depending how you look at it)

La Gazzetta is now saying that we have signed Quaresma for 18 million and Pele - not as loan but trade.

I think I am beginning to get my hopes up!