Off on the Road to Morocco Munich: A Preview

Share All sharing options for: Off on the Road to Morocco Munich: A Preview 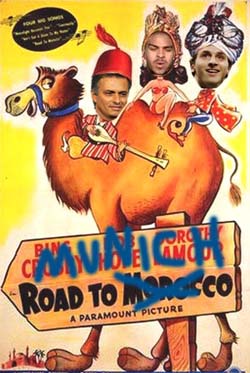 Now I suppose you are all going to tell me that I am the only one who watched those Crosby and Hope road movies on the TV as a kid. Oh well.

So, we are off on our grand European Tour. First stop is the Franz Bechenbauer Cup / Pirelli Trophy against Bayern Munich on Tuesday, Aug 5 (8:30 pm local time). After that we go to Holland for the LG Amsterdam tournament against Seville and Ajax.

But lets just take this one game at a time.

Our game against Munich will be our first real game against a top team this season. Munich are miles ahead of us in training, and don't seem to be missing either Toni and Ribéry (both injured). They are just coming from a 4-2 win against the Urawa Red Diamonds in Japan.

Since all I know about Bayern Munich came from the 3 or 4 UEFA games I saw last season, I took a stroll over to the Bayern Munich board on the offside to troll for information.

This is Elizabeth's quick summary of who we are are likely to see against us:

Offense: for those who’ve watched German NT matches, Bayern’s offense will be familiar. Miroslav Klose and Lukas Podolski are most likely to start in the forward 2 positions.

Midfield: Bastian Schweinsteiger is another familiar face from the German NT, who most often plays right offensive midfield. Other midfielders likely to start are Hamit Altintop (who played a very strong Euro 2008 for the Turkish side), Brazilian star Zé Roberto and Dutchman Mark Van Bommel (who used to play for Barcelona). Bayern youngsters Andi Ottl and Toni Kroos (not really known internationally, yet) may also make an appearance, as well as German NT player, new to Bayern, Tim Borowski.

In goal we have Michael Rensing, who is also relatively unknown internationally, as he’s been 2nd to Oliver Kahn for the past few years. But now that Kahn has retired, it’s his turn to prove he deserves his spot in Bayern’s goal.

[overstrikes added by me]

So basically their team is chucky-jam-full of extremely talented players. Grrrreattt.

Here are highlights from the Urawa game in case you want to scope Munich out.

Mourniho is taking 31 players with him on tour, everyone but Vieira:

Assuming he will play his typical 4-3-3, lets start at the back and work our way forward.

Julio Cesar will not play tomorrow as he has a small muscle problem. Look for Toldo to show us why he still has that #1 jersey. And hey, Orlandoni is not chopped liver, either. Toldo can still hang with the best of them - and he is going to need to be in tip-top condition considering who will be standing in front of him. 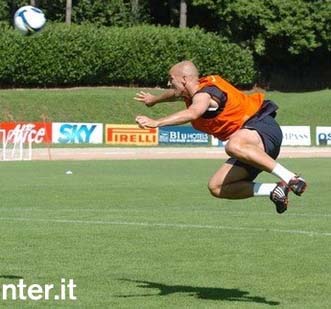 Defensively speaking, we are slightly f**ked. Cordoba, Materazzi, Rivas, and Chivu are out for tomorrow. Rivas may make an appearance in Holland, but for Munich, it will be Burdisso and Cambiasso in the center (in fact Mou doesn't think Chivu and Cordoba will be back until the second league match or the first CL game). On the up side, Cambiasso is clearly a super hero and will surprise us all in his versatility. On either side of Nico and Cuchu will be Maxwell and Maicon (in my opinion). Santon will also probably get some play time, Mourinho seemed quite clear on that.

Now on to the midfield.

I think it will be a lot like the Tropheo Tim. Muntari will play on the left, Dacourt in the center, with Zanetti on the right. Stankovic and Pele for backup.

Ibra will not play tomorrow, although I wouldn't rule him out entirely for Amsterdam. Cruz did not train with the team today so I don't think he is fit for Munich. Given that, I think we will begin with Balotelli, Adriano, and Mancini in front, with Figo and Crespo making an appearance.

Also, expect to see youth players sub in. Mou stressed the importance of games like this in providing vital experience for youth players. 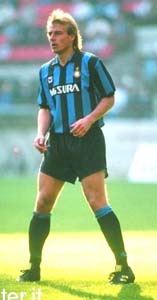 For those of you who don't remember, Jurgen Klinsmann (Bayern Munich's coach) is an ex-Inter player. He played for us for two seasons: 1989/1990 and 1991/1992. During that time, he made 123 appearances for the club and scored 40 goals. As Bayern's chairman Karl-Heinz Rummenigge also played for Inter in the late 1980s, this should be old home week for them.

Apparently Klinsmann still has feelings for his old club and had this to say about Inter and Mou: "Inter is a club with a great image. They are one of the top clubs in the world and now they have a coach in Jose Mourinho who has a lot of charisma."

Likewise, Mourniho loves Bayern Munich saying:
"They have many other excellent players. They are a beautiful team." and "Bayern Munich is without doubt one of the best clubs in the world."

So there you go, props all around.