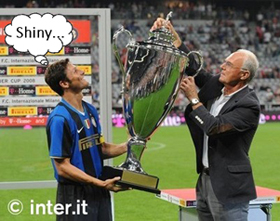 Today Inter met Bayern Munich at the Allianz Arena in Munich for the Franz Beckenbauer Cup / Pirelli Trophy game. This was what I would consider to be our first test. Juve and Milan are good teams this season, but the Trofeo Tim hardly counts. I did not expect much - Bayern has some very skilled players - but we did ok. We did not pass the test with flying colors, but we pulled a solid C+ / B-. Plus the win comes with a cup and a trophy. What's not to like? 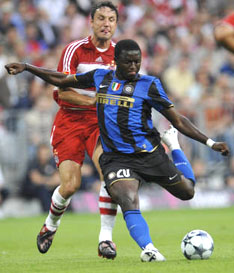 The first few minutes were completely controlled by Bayern. Then Zanetti took a tackle and spent some time on the ground holding his knee. I must admit, I was worried. The game began to open a bit more as the half continued and, although we were moving forward, we could not break through their defense. Muntari played well, pulling off some well-timed but crunching tackles - I was impressed by his work rate. Adriano brought out some of his tricky Brazilian moves and took a pretty good free-kick (on target but not past the keeper). Mancini had a pretty good strike - no power but on target. Even Stankovic only had a couple slack passes. At the half, things were looking up.

Inter clearly had their tails up as the second half began. In fact the pace increased on both sides, and, for a moment, I thought this was going to get serious. We were now taking full advantage of the width of the field. In the 52nd minute, Figo passed the ball to Mancini who chipped the it over Bayern's keeper. Old or no, I think Figo still has something to offer. After this, Bayern kicked it up and mounted an all-out assault. Figo and Adriano were subbed out for Pelé and Crespo and Inter fell back into defensive mode. At this point, the game was all about Toldo. In the last 20 minutes of the game he made 3 incredible saves, showing us all that he is still among the top Italian keepers. In fact, for me, he was man of the match (Bravo Toldino). Things got a little angry and Maicon was booked near the end. In the last minute Balotelli took a curving free-kick that was 2 feet from doubling the score. Here, see for yourself:

Here is Mourniho's take on the game:

For us it was a good workout. We played against a great team that will debut in a few days in the Bundesliga and that is obviously ahead of us in preparation. Cambiasso has adapted very well to play as central defense. And even Burdisso went well. The team seemed well-balanced in the field. In the second half we played better managing more ball possession. The last 15 minutes were important in maintaining the advantage. During the season it often happens that outcome is managed in the final minute. Toldo made three very decisive saves. What I liked more was the evolution of the team. Match after match we play even better. We have four friendlies against dangerous [teams]: Bayern, Seville Ajax and Benfica. We chose these because we wanted demanding races, not games to win four or five to zero.

So, Mourinho is happy, Zanetti is happy, Mancini is happy, and most importantly, I am happy. No one made any glaring errors and Cambiasso, true to my predication, showed us all just how versatile he is (I still want another CB, though). On the positive side, this will help our attitude and boost our confidence. On the negative side, Bayern were probably jet lagged from their Japan trip and were missing some very key players. I think we were very lucky that Klinsmann did not release the Schweinsteiger on us. It could have been ugly. So, as I said, a passable performance (everyone likes a win), but not stellar. We are definitely going to have to step it up for the upcoming season. 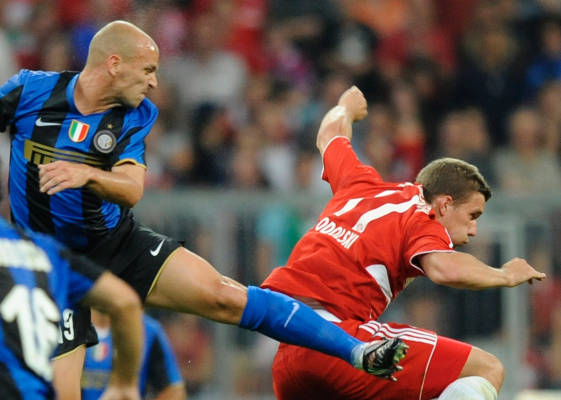 Next stop, Amsterdam and the LG Tournament.
We meet Seville on Friday, August 8, then Ajax on the 9th. And after this game, I am a much more confident fan. Forza Inter!

Inter was ordered by a Naples court to pay a Napoli fan 1,500 euro for "existential damage" caused by banners calling Naples the "sewer of Italy" displayed at San Siro last October. I must say, I think I need a payout for the existential damage caused by Inter loosing the last derby!

And we are still after Quaresma. 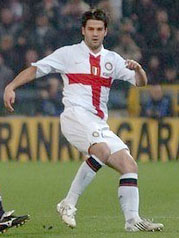 I just got my new Calcio Italia (go figure, in less than 3 months!) and there is a 2-page interview with Christian Chivu. In it, the interviewer asked Chivu:

Q: You seem content at Inter, but Pep Guardiola wants you at Barcelona?
Chivu: Write it loud and clear... never, never - and I mean never - will I leave Inter.
Q: A lot of people are talking, though?
Chivu: Never. Inter are my life. I dreamed of coming here for many years. The fact I bought a house as soon as I arrived makes my intentions clear.

That is what I want to hear from a player. None of this "I am happy here but you never know what the future will hold" junk. I love Chivu. And then:

Q: You had to fight a lot against the pain in shoulder. How many times did it pop out last seaon?
Chivu: Five, I put it back myself every time

then later: For me it is the same. I know how much effort I make to stay on my feet. Believe me, when... Mancini... sent me on the pitch I only thought about helping my teammates. I never thought of my shoulder. I have no fear.

PS. This one is all for you MAD and Antonio 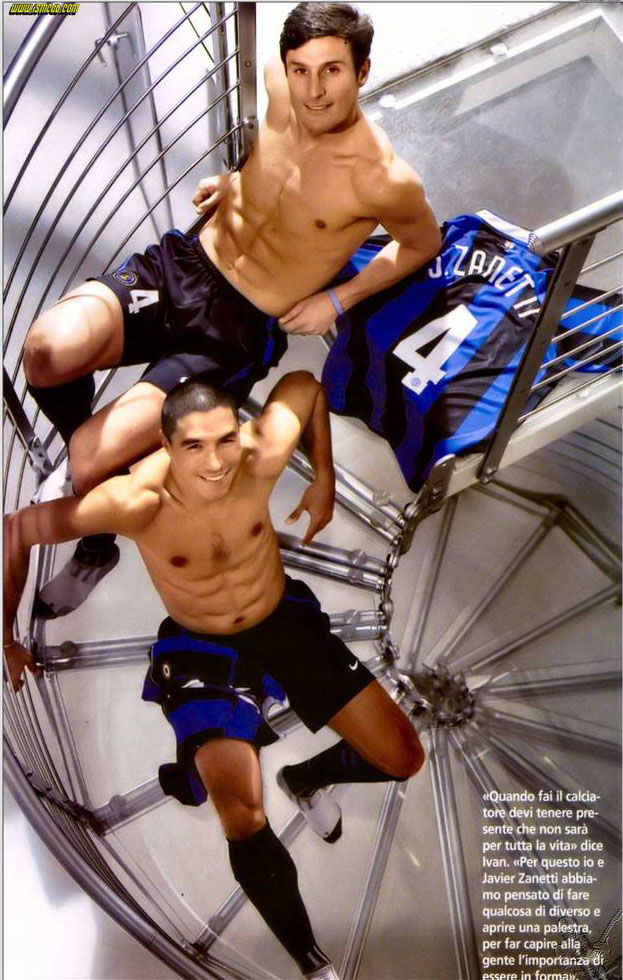 Once again, thank you Inter_Pervs