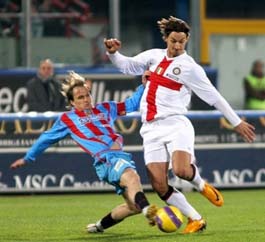 Aaaaaannnnd we're back. Finally. Thank goodness. On Saturday Inter will make their home debut against Gli Elefanti. We will be hoping to make a better showing than our 1-1 draw at Sampdoria two weeks ago. Saturday will see the official debut of Ricardo Quaresma and the return from injury for Cordoba, Vieira, Materazzi, and maybe even Chivu. Of course, to balance this, Stankovic and Jimenez were injured last week. Both will be out for a month or so.

Away, Catania 0-2 Inter (Cambiasso and Suazo)

Interestingly, none of the players that scored against Catania last year are likely to play on Saturday (well, maybe Cambiasso, but we will get to that). Of course, Cambiasso's goal was offside but still allowed. Hopefully none of that shenanigans will happen at this game. I am all for winning, but I would like to do it honestly. Ok, so on to Saturday.

I admitt it, the line-up for this game has me a bit stumped. More players are available and I am not sure who is favored yet. Also, we have a Champions League game on Tuesday, and I think some International players will be rested ahead of that match. So, here goes nothing (assuming 4-3-3):

With players like Cordoba and possibly Chivu (if not Saturday, then Tuesday for sure) returning, our back line is beginning to shape up. Quaresma has only been with the team for 2 weeks so has not really integrated, but last week at Locarno he gave glimpses of the skills he brings to the squad. If nothing else, our set pieces are bound to improve!

Here is what Channel 4 had to say:

Catania are also expected to go with a 4-3-3 system, although Giacomo Tedesco is favourite to replace Nicolae Dica for a more solid approach. Davide Baiocco returns from a ban and the more experienced Christian Terlizzi angles to take over from Silvestre in central defence. As Gionatha Spinesi remains injured, Giuseppe Mascara and Michele Paolucci continue to hold the fort upfront. We should see quite a battle down the flank between Quaresma and Uruguayan Jorge Martinez.

And the line up courtesy of La Gazzetta (because what the hell do I know about Catania?): 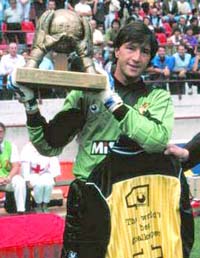 As I am sure everyone knows, Walter Zenga (legendary Inter keeper), took over as coach for the club last April. Since then, Catania has been feeling much better. They went from almost assured relegation to actually staying up. Last season, under Zenga, they beat Napoli and drew both Juve and Roma (thank you VERY much). Catania began this season by taking 3 points from Genoa at home. In addition, they have brought in a couple good players over the summer, most notably Michele Paolucci who came from Atalanta (on loan from Juventus). Apparently this kid is one of those next big things you always hear about, although, to date, he has not had a chance to shine. Catania's three forwards may make our defense work a bit.

Inter have never lost at home to Catania. In fact, we have played Catania 26 times (they spent quite a bit of that time in the lower leagues) and Inter have only lost 3 of those games and they were all over 40 years ago (in the early 1960's). We also drew 1 (Coppa Italia, 1980). Statistically speaking, then, we have a darn good shot of beating them, especially at home, even with injured/resting players.

In the end, the squad is confident and looking to win. We will have the support of the fans (Catania's have been banned from travel) and home-field advantage. I expect a huge turnout; Quaresma jerseys have been flying off the shelves in Milan and everyone will want to come out to see the new boy wonder for themselves. Sure, Mourinho may decide to rest some of our internationals before the match on Tuesday, but we have a great squad with considerable depth (even with the injuries). I am confident of taking full points here.

ps. Whatever you do, don't look at Stankovic's crotch

Once again, thank you Inter_Pervs.