Ok, so it wasnt pretty and technically both those goals for Inter were Catania own-goals, but damn it, we get the 3 points anyway. And boy do we need them. This was a frustrating game for the Nerazzurri: we had many chances in front of goal but just could not get past Bizzarri. And of course, it would not be an Inter game without a sending off and a controversial ref call. In this case, Muntari was sent off at the end of the first half and there was a question as to whether the ball completely crossed the line for the second goal or not - the ref and linesman said yes but the moviole has not confirmed to the liking of the media. Here are the highlights, you can see for yourself:

Linups for the game for both teams are here. 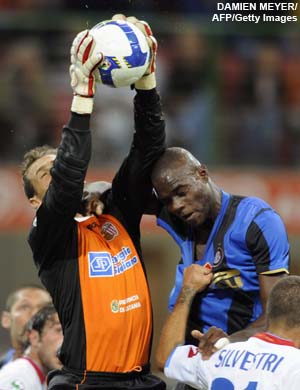 Well, Catania scored a humdinger of a goal. A great cross into the box that Plasmati headed expertly past JC. It sucks to be scored on, but at least it was a good finish. Also, just as you would expect from a team coached by Walter Zenga, Catania's keeper, Bizzarri had a practically miraculous game -- I remember at least 3 one-handed gut-reaction saves. While Mourniho may be over-stating things a bit when he said "the right result would have been 3-1, 4-1 or 5-1 to us," Inter would have had a more convincing win were it not for Bizzarri.

Whatever the circumstances we have 3 points from the game which is essential for a Scudetto challenge. I know it is a marathon and not a sprint, but we must make full points against the bottom 10 teams so there is more wiggle room with the upper 10. Despite Zenga's turn-around of the team, I think Catania is still a bottom 10 team. Onward and upward.