This is going to be quite short. I am up to my eyes with real, honest to goodness work (the kind you actually get paid for), and besides, I really don't know much about Panathinaikos.

US
Mou's squad for the game:

This is pretty much what we were expecting except for Burdisso who suspended after being sent off last year against Liverpool.

Here is what UEFA.com has to say:

Iván Córdoba will be back in defense alongside Marco Materazzi, with Mourinho facing his biggest decision on the right side of midfield where Mario Balotelli, Luís Figo or Mancini could play. Much will depend on whether Mourinho opts for a 4-3-3 formation or a 4-4-2 although either way Zlatan Ibrahimović and Ricardo Quaresma will start – the latter having scored his first goal for the club in Saturday's 2-1 victory against Calcio Catania.

Boy, wasn't that informative? Basically, with our defense coming along, we need to work on actually scoring. In the last game, towards the end, Mancini and Ibra were beginning to get into the swing of things. Hopefully that understanding will carry over into this game and they will not have to start from scratch.

As far as I can tell, this is their squad: 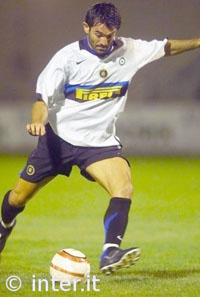 There is a pretty good run down of Pana from ESPN. I suggest you all read it.

Like Inter, Pana have a new coach with big ideas and a winning record in the champions League, Henk ten Cate. Among other clubs, ten Cate worked under Grant at Chelsea and at Barcelona under Rikaard. Players of note (according to ESPN) are midfielder Giorgos Karagounis (ex Inter 2003/4 & 2004/5, see photo), Brazilian midfielder Gilberto Silva, and striker (and captian) Dimitris Salpigidis. They have the new hot young thing to come out of Greece, attacking midfielder Sotiris Ninis, but he has been left off the squad for this game.

Here is what UEFA has to say about Pana:

Ten Cate will aim to tighten a defence which has looked shaky in the Greek Super League, and could bring in Marcelo Mattos as extra defensive cover in midfield alongside Gilberto. Panathinaikos kicked off their domestic campaign with a 2-1 loss at AEK Athens FC, but a 3-0 win against Panthrakikos FC on Saturday has lifted morale. Giorgos Karagounis was rested for that match but will return on Tuesday, with the Dutch coach saying: "He is one of the few players we have with considerable UEFA Champions League experience. Therefore he is extremely important for us."

-------------
By all accounts, Pana will be formidable adversary, especially at home in Athens. I think we have the talent to take them, the question is, will we? In the past we have been late bloomers in Europe (when we bloom at all). Here is what Mourinho thinks about our chances:

We need a better Inter than the one in the championship if we are to win tomorrow against a team that plays well, that is full of Brazilians who are good on the ball, and that will be supported by a great crowd. Every team is motivated, everything's more difficult in this competition. A small detail can change everything. Tomorrow I'm expecting Inter to control the game from the start, keep possession and hit our opponents as soon as possible. And I'm confident in my team.

And if he is confident, so am I.