Milan was off the a rocky start this season but seems to be improving. I'm confident of an Inter victory, but don't want to take anything for granted. Sounds like Ancelotti is confident (I'll keep track of the chocolate bars and smokes). "Am I worried about the derby? I was a lot more preoccupied before the game with Lazio" he said. 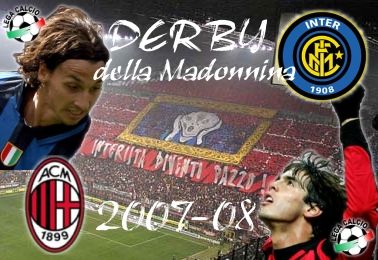 The Ibra and Kaka show

Channel 4 thinks that Shevchenko (the so called "Inter killer") up from with Pato.

Channel 4 has this lineup:

We'll be without Figo tomorrow. The Inter star has suffered a fracture to the third metatarsal in his right foot. According to the Inter web site, "Considering the fracture is not too serious, there are no operations planned by the club's medical staff."

Here is a little cartoon about the derby for everyone's enjoyment.