Champions League Drama and Other News

Share All sharing options for: Champions League Drama and Other News 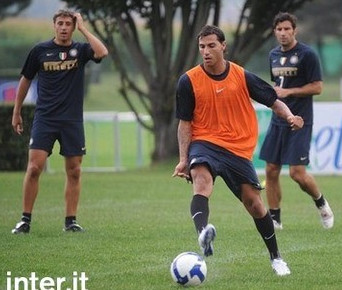 Ok, so we have all sorts of little snippets of news to deal with. The arrival of Quaresma has thrown Crespo's place in the squad into doubt and half of the team is out of town for the international break. At the end, we take a little looksee at the team and their contracts.

As you all can see, Crespo, Dacourt, Rivas, and Samuel are not on the list. Apparently, the news was broken to Hernan in a text message, and although he is not happy about it, he says that he will not leave, even if it means always sitting on the bench. Crepo's agent, on the other hand, says he may leave in January. I guess we will all have to wait and see.

Dacourt was supposedly being shopped around this summer to no avail. Samuel has yet to return from injury. Rivas is also still injured, though it may be that he just did not make the cut. Also, note that Zanetti is back in defense.

As many on the Serie A board have been so nice to point out, Inter does not have many players on the Azzurri. Still, a good portion of our starting 11 play for their national teams, and 9 players have been called up to their respective national teams (including Italy).

And for the Azzurrini (Italy under 21): Balotelli and Bolzoni.

Rivas was called up to the Columbian national team, but is staying in Italy to continue rehabilitation.

So, not too shabby.

Since there has been some discussion here about the squad and contract lengths, I thought I would post a little list. This is to the best of my knowledge, so please feel free to comment if I have any of it wrong.

Right now, the contracts for six players will expire next year.

Ok, I think that this is enough for everyone to think about for now. Dont forget, we have a friendly this Friday (Sept 5) against Locarno.