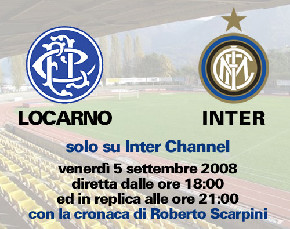 When: Friday Sept 5, 6pm local time (noon eastern, 9AM pacific)
Where: Stadio del Lido, Locarno, Switzerland
Streaming: Absolutely nowhere that I can find. Hopefully we can at least listen on Inter Radio.

Yep, to keep the non-internationals on their toes, Mou has scheduled a friendly against the Swiss team F.C. Locarno and boy, are they excited. For those of you who dont know (such as me before I looked it up), Locarno is on the north shore of Lago Maggiore, about 10 km from the Italian border.

According to the Locarno webpage, Burdisso, Chivu, Mancini and Rivas will be available for the game. Vieira, Samuel, and Cordoba may also make an appearance. Actually, Cordoba said he was ready for Samp:

I was already available against Sampdoria because I'm at the end of this injury and there was the possibility of me being used in an emergency situation. And now we have this friendly against Locarno, which is mostly for those who are back from injury. I think I will be ready for the next league match.

I think that Quaresma will play, although with this game only on the Inter Channel, I doubt I will get to actually see him. You know, you would think that clubs would realize that they have world-wide fan bases and allow people to subscribe to these channels on line. Moving on...

So who we might see:
Toldo
Chivu Cordoba Samuel Mei (or Santon, I cant remember which plays the wings)
Vieira Bolzoni (I forgot, he is on international duty)
Mancini Cruz Quaresma

I have no idea if Adriano is ready to come back or not. He has been filling out paperwork for the last couple of days instead of training so it does not seem likely.

As for F.C. Locarno, I cannot find all that much about them. I can say that they have not been winning - they are 15 points off the league leader. I bet that even with our team of youth players and walking wounded we can beat a 14th place second league team from Switzerland.

So, tune in to Inter Radio (you will need winamp or something else that plays *.pls files) and I will see you here (although 9am is rather early for me).

And that Mediaset ad with Ibra on La Gazzetta's web page is driving me MAD! They managed to take a pretty goofy-looking guy and make him look even more the dork. Yikes.