Stuff and Junk and Things

Share All sharing options for: Stuff and Junk and Things

Alright, I admit it, there is almost nothing to write about (damn you international break... damn you to hell), but I just cannot stand looking at that Locarno post any longer.

First, I guess I should officially say that the Locano game ended 2-2. Our newest, Ricky Quaresma made his Inter debut, and although he did not score, he certainly helped:

I just get happy every time I watch that (and I have watched it A LOT). Aside from that beautiful Quaresma/Cordoba goal, Cruz converted a penalty - but then he also made an own goal so I think that pretty much cancels out. It was fabulous to see photos of Samuel back out there, even if he is not quite ready to return to league play. 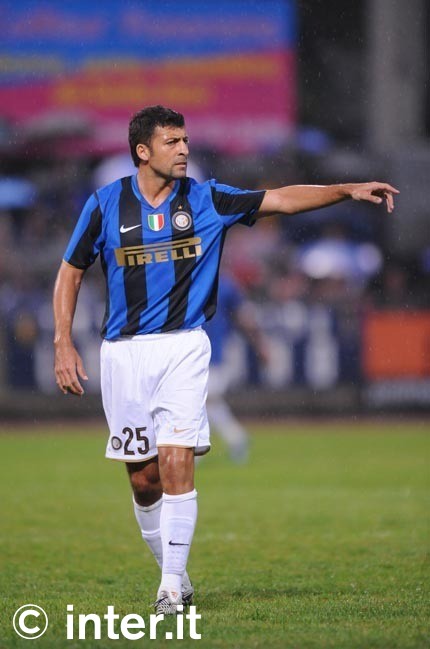 Doesnt he look like he is ready to kick some Serie A ass?

Now for the Bad News:

Our injury horror continues. Luis Jimenz "has suffered a myotendinous strain in the distal region of the rectus femoris muscle in his left leg." Great, just great. As il Corriere dello Sport points out, this is our 7th muscle injury of the season - and we have only had 1 official game. Cripes. Il Corriere also thinks Jimenez could be out 4 weeks. Man, anyone who thinks we need a smaller squad has only to look at all our injuries. If we had fewer players, we would be truly up a creek right now.

Our boys have been doing relatively well with their respective national teams. Of the players called up, only Bolzoni has not seen field time. And, as I write this, none have been injured (knock on wood).

Roberto Mancini (remember him, all those Scudetti, great hair...) has won the Trofeo Maestrelli for the best Coach of 2008. No matter what you may think of him, under Mancini Inter enjoyed more success than under any coach since Herrera (1960-1968). So, Grazie Signore Mancini e tante auguri. And lets go Jose!

Something to tide us until Saturday: