Well I suppose it Could Have Been Worse

Share All sharing options for: Well I suppose it Could Have Been Worse 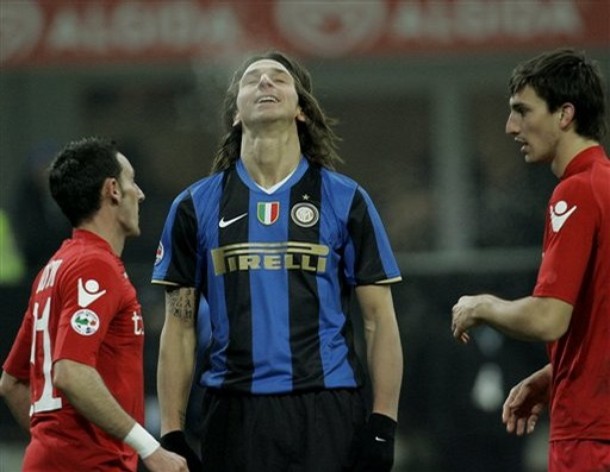 But it really should have been better! Inter were held to a 1-1 draw against Cagliari last Saturday. More than anything, the game was frustrating. Inter had chance after chance in front of goal, but just could not place a shot on target. The statistics speak for themselves: 28 shots, only 8 on target. Out of that, Inter get 1 freaking goal. Cagliari was better: they had 13 shots, 4 of which were on target, with 1 getting through. That is a much better shot-to-goal ratio. For Inter, this game was all about missed opportunities. These 2 dropped points may well come back to haunt us.

Not only did we drop 2 points of our precious lead, the squad also picked up a couple of injuries. If you watched the game, you may have been just as surprised as I was when Quaresma came on for Cordoba for the second half. Well, it turns out that Cordoba picked up a back injury which is why he had to come off. Muntari was also injured, but played a full 90. He didn't play it well, but he played nonetheless. No word as to how bad the injuries are, but I wouldn't be surprised if neither of them played on Tuesday.

There were a couple bright moments, though. First, Zanetti had a great game - talk about leading by example. He had two great shots on goal, both of which were preceded by those long, bombing runs he likes to make up the byline. Also, Crespo did not suck! Strange but true. He only played about 25 minutes, but he did an ok job. He even was the driving force behind Ibra's equalizing goal. Really, good job Crespo! Nice to see you back for a change.

Probably the strangest thing today was the tinkering with player's positions throughout the game (very much like the last CL game and we all know how that turned out).

We began with 4-3-1-2 which would have been ok, but Mou had Zanetti in defense and Chivu in the midfield. Now, Zanetti had no problem in defense - that is where he has spent most of his career - but Chivu was a little strange in the midfield, especially after Muntari picked up that knock and turned to poop. I think Chivu can (and does) play that position, but it is not his preferred place, and after such a long lay off, it was all just too much for him. 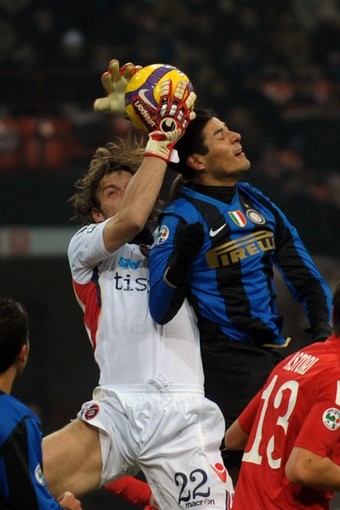 At the half, Quaresma came on for Cordoba which meant that Chivu had to drop back into central defense - no problem - and we switched to a pretty standard 4-3-3. Actually, the first 15 minutes or so of the second half was 100% Inter. We had them completely pinned and were shooting at will. Unfortunately, NONE OF THEM WENT IN. It was MADDENING! And it wasn't even as if Cagliari's keeper was having a stand-out night - nope, we just plain could not put the ball on target.

Ok, now things get a little tricky. Bobby scores for Cagliari and Mou decides to throw everything we have at them. Off come Samuel and Figo (who had been playing well but was clearly starting to tire), and on go Crespo and Mancini. At this point, Inter have every single forward they brought to the stadium on the pitch. I think Cambiasso dropped back into Samuel's spot and Muntari moved to the DM spot in the center. Whatever it was, it was wacky. I think the goal Ibra finally scored was less about Inter and more that Cagliari just cant seem to keep from conceding in the last 15 minutes of play.

If you consider all the jerryrigging and the injuries (oh ya, and there was Samuel's knock to the head early in the first half), then perhaps Mourinho is right when he says:

"Many people might think that these are two points lost, but I want to think that this is a point. I'm not looking for excuses, the team has to return to the level we know it can play at, and we have to deal with the absences. I can't say we played a bad match today. I have tried to give Inter balance since I have been here, and this is what has affected our performances in recent matches. We didn't have Stankovic in Siena, we didn't have Maicon today and Muntari will miss the match in Bergamo. It's inevitable that with many changes we lose in terms of balance and quality."

Whatever. A team that wants to compete both in the league and in Europe must have enough depth that an injury and a suspension dont throw everything into a tizzy. There is absolutely no reason why we should not have won this game. We may not in Sucksville like we were earlier in the season, but we are definitely standing on the platform of the train to Sucksville and are mere moments from boarding.

For the masochistic among you (in high quality at youtube):

But there is no time to lick our wounds. Tuesday is our first Coppa Italia game, and now matter how disregarded the cup is in Italy, Mou wants it. He wants them all. Genoa is proving to be a surprisingly good team this season, even without Milito, so he will have to take this game seriously to continue.

As for the league, just as I predicted, Juve beat Siena (although they also looked a little rusty), and, much to my disappointment, Milan drew with Roma (I thought at least we could count on Milan dropping points). Inter come out of the weekend still at the top, but not quite as commandingly so. Next Sunday's fixture against Atalanta has now become pivotal. But I suppose we can wait until at least Thursday to start stressing over that.

Mourinho went to England to watch the Man United - Chelsea game. Clearly he found something to be smug about. A little schadenfreude directed at Scolari? Or perhaps he found ManU's fatal flaw. 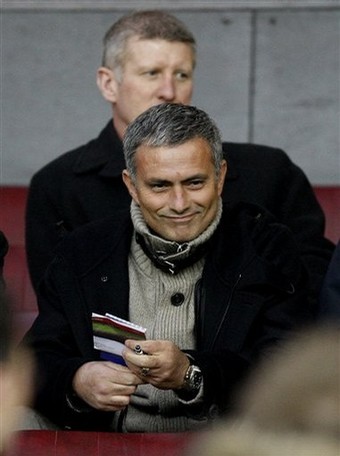