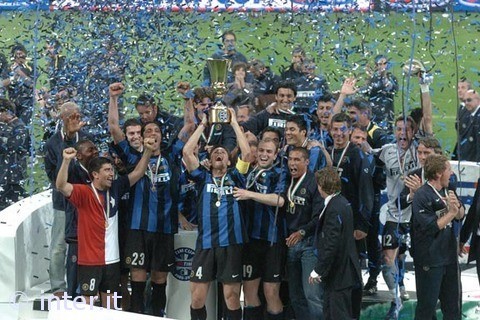 When: Tuesday, 9pm local time (noon pacific, 3pm eastern)
Where: San Siro, Milan
How to Watch: Ride the stream at MyP2P or ATDHE.net
Weather: Miserable, 37°F with 60% chance of precipitation

Inter take on Genoa at home in the Round of 16 for the Coppa Italia (also called the TIM Cup as Telecom Italia Mobile sponsors the thing). This is our first game in the 2008/9 tournament, but Genoa have already knocked out two Serie B teams: Mantova and Ravenna. The winner of this game will take on Roma in the Quarterfinals, the looser is out. I guess 4 consecutive Inter v Roma finals was getting boring.

So, will someone please tell me why I should care about this tournament? For both Roma and Juve, a win this year brings them to 10 so they would get to add a silver star to their jerseys - everyone like stars. For Inter, this would be number 6 - great, but no big thrill. Sure, it is nice to win things and all, and it would be a keen consolation prize if we were not in the running for the Scudetto, but right now, it just feels like a distraction. Don't get me wrong, it was fan-freaking-tastic to win in 2005 and 2006 - it had been so long since we had won anything that I was overjoyed with the trophy and the little round patches for our jerseys (right). Now, though, the game is just one more chance for someone to be injured.

According to our Bear-on-the-ground, Inter fans in Milan feel about the same. Inter are literally giving the tickets away but no one wants them. Can you blame them? The game starts at 9pm on a school/work night and it held in an open stadium where, at best, it will only be freezing cold. At worst, spectators will have to sit 90 minutes in the sleet. Talk about a hard sell. I love Inter, but I think that would keep me home as well.

Traditionally, this tournament is a time for younger players and B-squad members to shine. Last year Balotelli was thrust into stardom with his brace against Juventus in the return leg of the knock out round, eliminating Juve from the competition. This year, though, Mou is setting his own course and the call-up list includes the usual suspects:

The notable absences are all due to suspension, injury, or spoiled brattyness:
Materazzi and Cruz are suspended; Stankovic, Cordoba and Vieira are injured; Balotelli has a bad attitude. So there you go. The only youth player on the list is Santon and I bet cash money that he will not see the field unless something too horrific to even think about happens.

Mou wants to win, and is treating the game as such, saying:

"We have to win. It would be easier to say that it's not an important match, I would have an excuse ready on the table if it went badly, but it's not like this."

As for the line-up, Mou said that Adriano will play, but is not fit for a full 90. Toldo will start, "with Maicon, Burdisso, Samuel and Maxwell in defense."

As for Genoa, they are coming off a big win against Torino. Their star striker, Milito, is out injured, but Saturday's 3-0 scoreline suggests he is not overly missed. I am sure that they will bring their "A" squad to Milan, and also want to win, but Inter is not Torino and I think we can take them. Besides, Maradona is attending to check out our Argentinians: he is meeting with Zanetti and Burdisso after the game, and Samuel is "on his list." They will all be on best behavior for him.

[on a side note, Maradona is causing quite a stir with a short interview he gave to Il Corriere dello Sport. He thinks that Tevez and Aguero should both come to Inter and he intends to tell them so. Of course, isn't that what Moratti pays him for?]

I think it is safe to say that all eyes will be on Adriano tomorrow. This game is a bit of a make or break situation for l'Imperatore. He has to show once and for all that he is not the drunken man-child he has been acting like these last few years. Everyone, cross your fingers - we desperately need him to come back.

So, no predictions tonight. It will be what it is. Winning is always better, but if we dont, I wont cry. Just please, please, please, no more injuries. I will be attempting to watch this at work tomorrow. Luckily, it starts at noon here in Seattle so at least I can claim some of that screwing around as lunch. Hopefully the streaming fairy will be kind.

Well, I guess the Coppa Italia isn't totally useless - it is, after all, a cup. 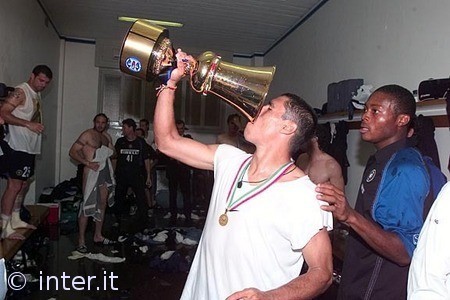