Taking on the Dragon Slayers

Share All sharing options for: Taking on the Dragon Slayers 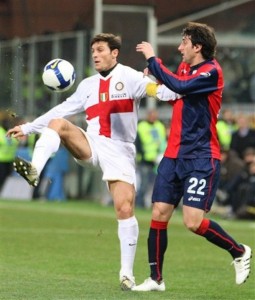 On Saturday, Inter take the 1½ hour train ride (on the Intercity) from Milan to Genoa. This is no easy trip as Genoa have a long history of beating the crap out of us, especially at the Stadio Ferraris. Last year, Genoa were good, this year, they may be better. Due to our player exchange over the summer, there are players on both sides raring to show their old club just how good their new team really is. Both teams have their share of injuries but neither will let that stop them. This one is going to be scrappy.

What: Genoa v Inter, Matchday 8
Where: Stadio Luigi Ferraris, Genoa
When: Saturday, October 17, 8:45pm local time (11:45am pacific, 2:45pm eastern)
How to Watch: Fox Soccer Channel is showing this later Saturday night (8:30pm pacific, 11:30pm eastern). If you want to watch it live, it will be on ESPN360 or find a stream: MyP2P, Rojadirecta, Ustream, and ATDHE.net.

As I said, Genoa has a pretty good record against Inter at the Stadio Ferraris. In fact, Inter pretty regularly lose this tie: of the 57 games played, Inter has only won 13 and drawn 21. The quick among you have already done the math - Genoa have beaten Inter a staggering 23 times. Yep. 23. Plus, they have a history of really slaughtering Inter. I am talking like 6-0, 6-1 (twice), and a smattering of 5 and 4 goal wins. Of course, most of that was in Genoa's glorious past, but even in the 90s they beat us 3-0. Formidable sums it up pretty nicely.

Last season, Inter managed to beat Genoa and even keep a clean sheet (thank you Zlatan and Mario).

Pat Cook has stepped up and taken over the Genoa blog. Hopefully he will do a preview because I dont really want to spend a lot of time here.

According to La Gazzetta, Mesto is disqualified while Jankovic, Juric, Kharja, Crishito, Biava, and Papastathopulos are all injured, although Juric may recover in time for the game. They sit at fifth, just three points behind Inter. They have shown they have the talent to take on the big four by soundly thrashing Roma and holding Juve to a 2-all draw. Away from home it is different story, but, as we are playing this game in Genoa, that hardly matters. Basically, they are a good team with an excellent coach who have built a bit of a fortress at the Ferraris - they have yet to lose at home and I dont think they plan on starting Saturday.

Oh, and no matter what he says, Crespo is totally going to want to stick it to Mourinho. 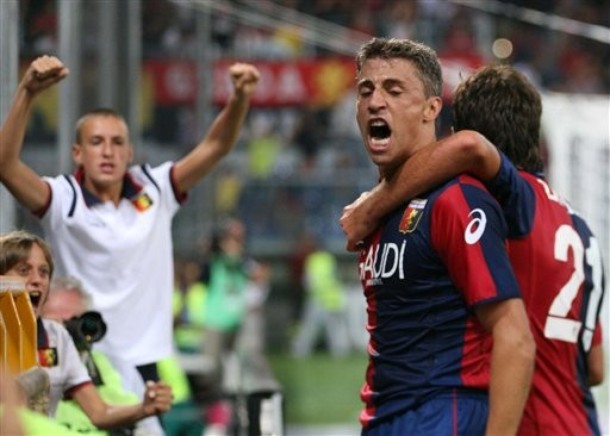 Crespo may have finally found his groove in Genoa.

Genoa have a great scoring record and are on par with both Inter and Roma with 14 goals (Genoa, Inter, and Roma are the league scoring leaders). Unfortunately for Genoa, they have also allowed 11 goals (Roma and Napoli have the most goals allowed at 13 a piece). A quick check of ESPN's handy chart showing goals scored and conceded by time shows that Genoa have a real problem in the first and last 15 minutes of a game. That half-an-hour accounts for 8 of the goals they have conceded. As for scoring, it appears that Genoa take about half an hour to get into the game, but then they score pretty prolifically throughout the game. So there you go - if we want to beat them we need to hit hard in the first thirty minutes, hunker down for the next 45 or so, then take advantage of their flagging concentration and score to score one or two more. Yep. That's the ticket. It may not be pretty, but it may help us retain our spot on the table.

When I see that, all I can say is YIKES. As expected, Milito, Motta, and Eto'o are all staying home with the hope that they will be ready for the Champions League game on Tuesday. It looks like it is time for Balotelli to live up to a little bit of that promise we always talk about. And Suazo, well... I am trying to remain optimistic. Both had adequate showings with their respective national teams. I mean, they didn't shine but they weren't horrible: Suazo got a couple of great crosses in against Trinidad & Tobago (one lead to the winning goal) while Balotelli, well he wasn't sent off.

Mou was coy about line-ups in his press conference today, not discussing tactics at all. When asked point blank whether Balotelli and Suazo would start up front, he said:

"Both could start or neither. We played a great game against Juve in Pescara in the Trofeo Tim: we did well without attackers in that role, in the field there was Quaresma and Mancini...."

As for Arnautovic, he really must have been bad in last week's friendly because a reporter asked Mou if Arna was actually struggling more now than he was a month ago. Mou refused to comment - which seems a little ominous to me. He may be another gamble that will just not pay off.

As for the game, Mou thought this game would not dominated by Inter, but a dialog between the two teams, saying:

I do not think that Genoa is a team that will allow his opponent to play 90 minutes in his midfield: it is too strong a team to allow their adversary to conduct the game how they want and with the pace they want. I believe it will be a question-answer and answer-question type of game, we play, you defend and vice versa: lake all the games against Genoa there will be a sort of dialogue, not a monologue. Int this sense Inter will be ale to defend ver well because Genoa is a team that, if you project in attack, can create difficulties due to thier speed and when we are ourselves and have the ball we will try to make goals. We are a team that almost always scores, throughout this season we have only failed to score against Sampdoria.

So dont look for long periods of possession from Inter. Instead, we will defend well and hope to capitalize on breaks. We will play gritty an ugly, gritty game, the pundits will complain, but that will be the only way we can win this.

Allora Raggazzi, I have to jet - we are going away for the weekend and the SO is engaging in some mental foot-tapping right about now. Everyone think positive thoughts - we are going to need all the good vibes we can get to pull this off.

I will leave you with a little Eto'o butt - that is bound to lift our spirits. Granted, it is Barcelona Eto'o butt, but I bet Inter Eto'o butt is very similar: