But What Have You Done For Me Lately?

Share All sharing options for: But What Have You Done For Me Lately? 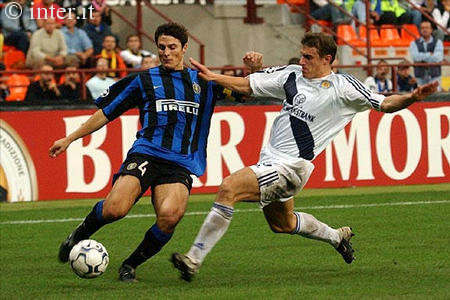 Sure, Inter just dismantled Genoa on Saturday, but this is Tuesday and a whole new game. More importantly, this one is an absolute must win (no matter what Mou says). After two games, Inter are third (third!) in Group F, behind Barcelona and Dynamo. A win against tomorrow will move us up into second - a much more agreeable place to be. 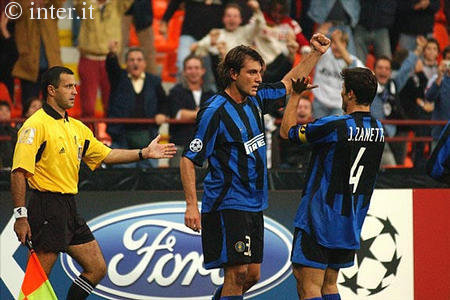 Bobo got the winner last time - who will it be tomorrow?

This is actually the third meeting between these two teams in Champions League. Inter met Dynamo in the group stages of the CL during the 2003/4 season. We drew the away game while a late goal from Bobo Vieri allowed us to take all three points at home. For those interested in trivia, UEFA has kindly assembled a whole list of interesting Inter v Dynamo fun facts (for instance: did you know that Dynamo's coach Gazzaev was the coach of CSKA when Inter beat them both at home and away in the 2007/08 group stage? I didn't!). Anyway, there are too many for me to go into here so follow the link if you are interested. 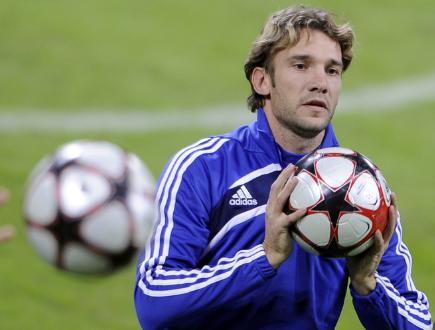 Shevchenko scored 14 times in all competitions for Milan against Inter. I hate him.

First, let me say it is really difficult to find info on the Ukrainian League. ESPN doesn't have any coverage so I have really had to dig for what little tidbits I could find. In other words, dont expect much here.

Valeri Gazzaev has brought 19 players I have never heard of and Sheva to Milan:

FC Dynamo Kyiv are currently at the top of the Ukrainian table with 28 points after 10 games. They are unbeaten, having won all but one of their games. In fact, a quick look at the results table on their web page shows the only loss they have suffered this season in all competitions is the game they played against Barcelona. It is also the only game they failed to score in. As for goals, Dynamo have scored 28 goals and only conceded 6 (in 10 games) so they definitely know how to hit the back of the net (interestingly, the Kiev fans have predicted the game will end 1-2 in their favor). 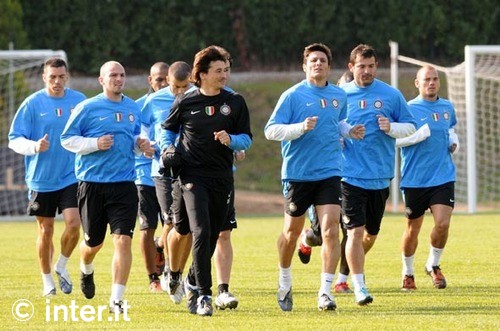 Saturday Mourinho said that both Milito and Motta would be unavailable for this game. Today Mou said that there is a "small chance" that Milito will be available - Motta is still a no (although he will be back for Catania). As for Eto'o, he is on the list and he trained with the team - I think he is more likely to start over Milito. Plus, there is always Suazo. 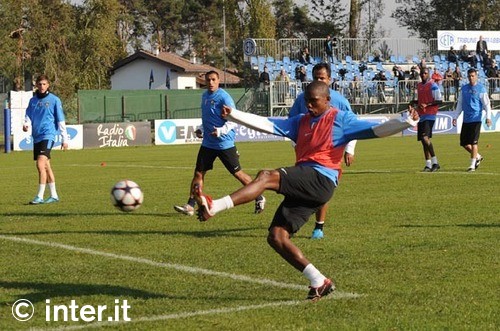 He looks ok to me.

Both Samuel and Cambiasso came off during the Genoa game as a precaution. Both are on the list (and in the training photos) which makes me super happy. Marco is also on the list, and although I highly doubt he will see the pitch, the thought of him against Sheva makes me all kinds of nostalgic for those derbies days of old. Well not the losing, but... well, I am sure you all know what I mean.

For the record, MAD has predicted we will play the same line-up as on Saturday with Eto'o playing in place of Balotelli (it is official now!). For those of you who did not see the game, that means the lineup will be:

Mou gave very little away at the press conference today. When asked if Inter's approach would change at all from the last CL game, he said no: [my translation]

"I will leave things to go naturally, the victory will come. I think it will come tomorrow, if it doesn't come tomorrow, it will come in Kiev, if it doesn't come with Kiev, it will come in Barcelona, if not in Barcelona, it will arrive at the house of Kazan, if it still doesn't arrive with Kazan, we will go to the Europa League and win there, if we don't go to the Europa League, we will all come home. [smiling] But joking aside, we will go forward with ease: the team has a great mentality, they are aware that tomorrow's game will not be decisive, but it is important to me. With peace we can do anything, anything is possible, with the understanding that in football, it takes two minutes to go from paradise to hell and from hell to heaven. Like I tell my players, don't read the papers too much when they write negative things about Inter, similarly, I advise them not to read the papers when they describe Inter as the best team in the world."

As for if Inter's 0-5 thumping of Genoa will inform on the coming game, he also said no: [my translation]

"It's the same thing I said to the players Saturday night before going out and that is that the best way to prepare for the Champions was not resting, playing at 50 percent or to leave the important players on the bench, but to exit the stadium in Genoa with joy. The joy comes when you win and play well, obviously after that race the team was very happy and confident, every player did his job very well and I think that in these hours before the game against Dynamo the team is happy and, I repeat, in my opinion the best way to prepare for an important match is to be happy."

Still, he thinks that Inter can give Dynamo problems and vice-versa, saying: "The match tomorrow will be difficult for us but not easy for Dynamo." 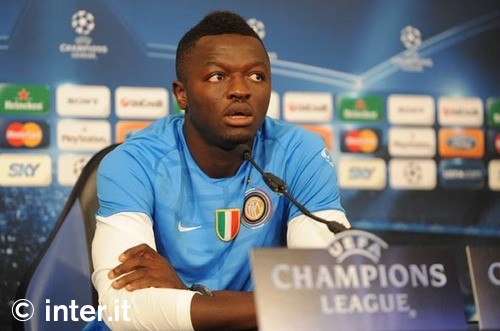 "I came on the pitch against Udinese with a strange face? That is my face."

Muntari (strange face and all) was much more decisive saying:

"We're in good condition. We will play a good game and we will win," he told journalists in the pre-match press conference. It's true that Inter have had more difficulties in Europe than in league games, but we want to win at all costs tomorrow. These are three important points for us. We have the potential to do well. We haven't won in Europe in seven games but we will start winning from tomorrow."

So, where does that leave us? Well, I think in a much better position that against Kazan. We have recovered Sneijder and will be playing at home (always easier). Plus, I can't believe the Ukrainian League is that much more difficult than the Russian one, so I suspect that Dynamo is about at the same level talent-wise as Kazan. Both are at the top of their respective leagues with a bit of a cushion. I think with Sneijder and without Balotelli sending off, we could have beaten Kazan and therefore I am cautiously optimistic about tomorrow. I know we are in a bit of a crunch up front, but I swear I read somewhere that Eto'o said he is feeling much better and will be ready to play (I just can't remember where). Of course, that could be my subconscious planting false memories to stop me from worrying, but right about now, I will take any little hint of good news and run with it.

And since it had such a great result last time: Everyone think positive thoughts.

No nekid Samu this time, but how about fun with Matrix and Deki?