Matchday 3 for the UEFA Champions League group stage ended for us on Tuesday. As usual for Inter in a Champions League game it had its ups and downs. Unfortunately for me, it starts on Fox Soccer Channel when the idiot who is the color commentator had to ask his partner whether the Italian team playing was AC or Inter Milan. There was a pause and then I hear, "Oh, Inter… okay, I got now…" Yikes.

I found one other thing kinda humorous/sad on Tuesday. For those who don’t know the Offsides has a Champions League page and on game days there is a running commentary by people on the games and scores. Chris, of the Roma Offides, said that he wasn’t surprised the Lucio had the shocking game that he did, since Lucio shouldn’t be relied on. The Ironry? Check out what he’s been saying about Burdisso for the past month and his reaction to the same’s shocking game on Sunday (in short - it was the ref's fault, not Burdisso's). It’s really pretty funny, but the delusion is sad as well. Lucio cost us a win this day, but Burdisso used to prevent us from getting points at all.

Okay, enough hilarity and hypocrisy in the game commentary. Let’s move on to the game itself. In my mind there are only two men who deserve to be considered my Inter Men of the Match:

Too bad one of them ran out of gas at about the 60 minute mark. Hint: it wasn’t Zanetti. Highlights after the break. 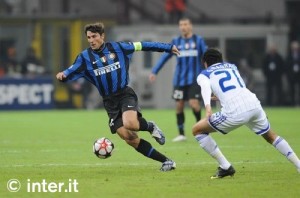 The bad news is legion: we are in the Group of Death, we are in the only group in which all four participants are actual Champions, we are in last place in our group, 3 points is good enough for 2nd place in several other groups, we need to travel in 2 out of our remaining 3 games, we need to win to jump places and advance.

The good news? We are a point off the first place team. We are a point off the second place team. We haven’t lost a Champions League game this season. We have drawn against 2 of the other teams in our groups while fielding “backups’. For this group, the group stage essentially starts over from the beginning in 2 weeks. In a week when only 5 of the 16 home teams won their games we were able to escape with points.

Cesar: I don’t think that I can blame any of the goals on him, but the people who are calling Iker better than Cesar – read: EPL fanboys – need to get a grip. 6.5

Maicon: I thought that Maicon had a very balanced game. He took a few wild shots, but that’s a good thing actually. We want him to attack if he gets an opening. 7.0

Lucio: First bad game of his season, and it was a doozy. He helped save the game twice, he nearly killed us twice and he scored on his own team once. Not good. 5.0

Samuel: As usual our best defender. Plus he was also one of our best attackers. The goal he scored was sublime, but it’ll be forgotten because it came from him. 7.0

Chivu: An average game. Was beaten for pace several times. Made a smart tactical foul when needed. Was absolutely no factor going forward. 6.0

Zanetti: It gets repetitious about how solid a player he is, but he was even better this day. He took it upon himself to mark Sheva so Maicon could stay forward. He attacked and gave Suazo the best opportunity to score in the game that wasn’t put in. A monster. 7.5

Cambiasso: It looked like he was injured the whole time he was out there. He wasn’t able to control the middle and he wasn’t able to hound people like he should. He was average. 6.5

Muntari: Another average game from Muntari. He didn’t make any glaring mistakes that I saw, and he was reasonably hard to get past on the left. He did his job. 6.5

Stankovic: Scored a goal, missed close on another. Deki attacked the goal and caused problems. Exactly what you want in an AM. It almost made up for causing the first goal. 7.5

Sneijder: Was dangerous in the attack even though he was getting nailed when he got the ball. He was marked so heavily and had to spend so much energy getting space that sometimes his passing looked a little off. I give him an “A” for effort, though. 7.0

Eto’o: Also looked out of sorts up top. I don’t think that he’s built to be a lone striker as he was pushed about once or twice. He had a marvelous chance to win the game with a half volley that unfortunately the Dinamo keeper was able to desperately deflect. He was called for an invisible offsides and hauled down in the area once each. Very frustrating, but it’s something that we who follow Inter are used to – especially after that Liverpool game 2 years ago. 6.5

It’s another Champions League misstep, but it’s not a huge one. I told you guys on the last game review that the good press wouldn’t last long and it hasn’t. All 4 teams in the group is within a point of each other. Anything can happen. We are going to struggle to make it out of the group stages of this tournament and the media/trolls will make too much of it. Since the media and the trolls are waiting to attack anyway… it’s not like they should be particularly effective.

We will either advance or not. And if we don’t, then we will probably have to deal with the Europa League. Net result? We lose 10-15 million Euros that we had last season. It’s a good thing we cut the wage bill a bit from last season. Some might say that Mourinho’s job would be on the line. I would doubt it though. He’s probably in the most stable position of any other manager in the top 3 teams. Anyway, it’s back to Serie A on Saturday against Catania. Life goes on. 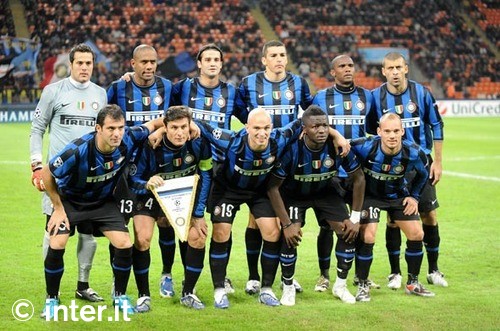