Oh Ya, There is That Whole Serie A Thing Too

Share All sharing options for: Oh Ya, There is That Whole Serie A Thing Too 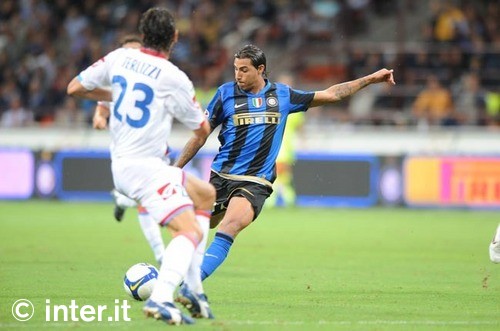 Ok. So now we have to shake the Champions League blues from our hearts and minds and really, there would be no better way to do that than to unload a serious Genoa/Milan style whooping on Catania. But we musn't get our ahead of ourselves, there are no sure things in football. Catania are by no means a bad team. True, they have only managed to collect seven points in eight games, but they managed to pick up a gritty win last weekend against Cagliari - maybe they are just slow starters. Anyway, with Juve and Samp snapping at our heals, this is no time to let up.

What: Inter v Catania
Where: Stadio Giuseppe Meazza, San Siro, Milan
When: Saturday, Oct 24, 8:45pm local time (11:45am pacific, 2:45pm eastern)
How to Watch: Fox Soccer is showing it live (whoopie), or you can find a stream: MyP2P, Rojadirecta, Ustream, and ATDHE.net. 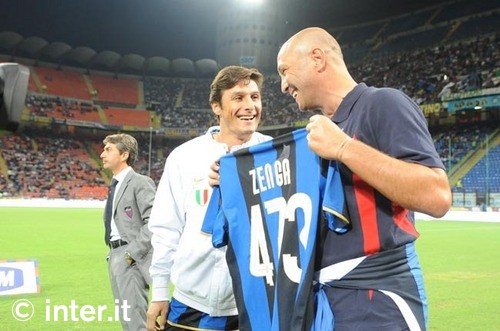 See, Zanetti gave him a special shirt and everything.

Last year, this tie saw the return of Inter legend Walter Zenga to the San Siro. He got a warm welcome home from the fans (always nice to see), and his Catania gave us a real run for our money. This game also saw histrionics from Tedesco (and the subsequent red for Muntari), a very rare goal from Quaresma, and a phantom Balotelli goal. Highlights:

Catania do not have a very good record at the San Siro. Granted, the sample is quite small (only 14 games in all competitions), but Catania has not won a single game in Milan, and only drawn one. In fact, according to the fun facts Inter's web page assemble before each match, Cataina have only won one match in their last 37 away games (10 draws, 27 losses). Yikes. 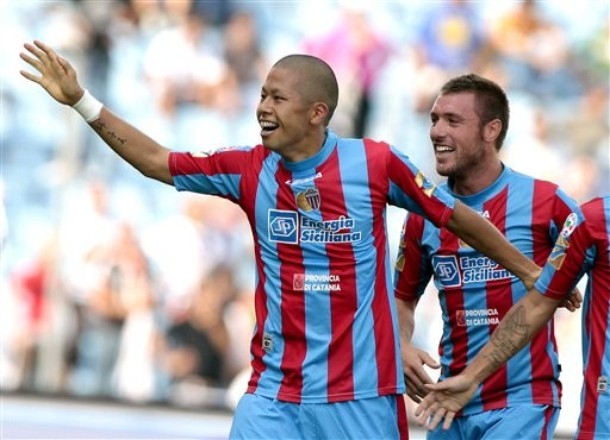 Catania has made sort of a mediocre start to the season: last week's win over Cagliari was their first of the season. They had managed to draw the previous four, though, so maybe they were just warming up.

*I can't help it, every time I see his name that is all I can think of. I know, I am a huge geek.

And who would I be to disagree?

Atzori says they are not afraid of Inter (they always say that), but they know it will be a tough match. There are three points up for grabs and apparently Catania want some, if not all, of them. 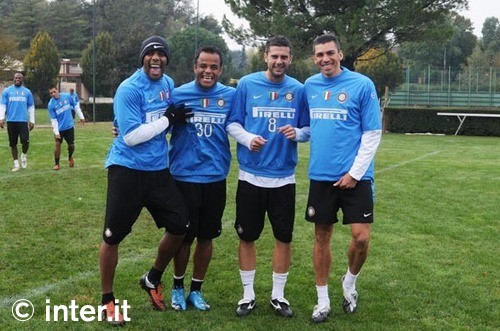 Our wacky outfield Brazilians. JC will be so upset he missed the portrait.

Mourinho has called 18 of our guys:

Although Mou told us that Milito and Motta (Motta especially) would be back for Catania, it seems it is not to be. The doctors say they are still unavailable and now we can add Cambiasso to the injury list as well. I am trying not to think about this too much or about what it means for the lineup tomorrow. Vieira gives me heartburn. Eto'o is still in some pain but, as Mou said, if he could handle the Kiev game, he can handle Catania. You will notice that Samuel has also not been called up. Not to worry, he is just being rested. Cordoba will play with Lucio this time, and, in turn, Lucio will be rested for either the Palermo or Livorno games. It is interesting to see Arnautovic on the bench - I doubt he will get any play time though. Quaresma is still on the outs, I bet he will finally leave this winter (and I so wanted him to be good).

Tomorrow's match will be a bit of a milestone for both Maicon and Zanetti. If they play (and why wouldn't they), Maicon will make his Serie A century while for Zanetti, it will be his 476th league appearance for Inter. That will put him in joint second place (along with Giacinto Facchetti) on the all-time list of Serie A appearances for Inter.

As for line-up, Mou is not quite sure what he will play. When asked if he will continue with his Christmas tree or move back to the diamond midfield, Mou said:

I would love to know how to play against Catania but I dont know, Catania will not know how I play. I dont know why I will not tell the press or even someone who would tell you, because this happens often. The team will know who will play an hour and a half before the game. 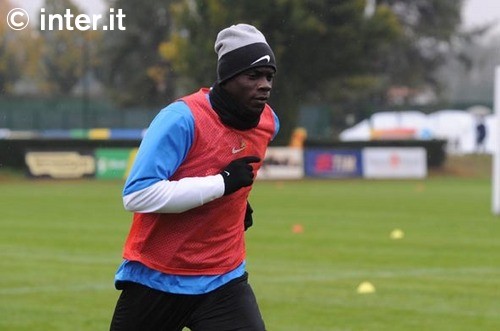 Oh Mario, why do you always make everything so hard for yourself?

So there you go, no help there. Mou even tried to muddy the waters a bit more when the journalist asked if, in light of his good performance against Genoa and the fact that he didn't play midweek, Balotelli was a little closer to Milito and Eto'o in the hierarchy. As near as I can tell, it was a bit of a round about way of asking if will Mario play. Mou said:

Right now we dont have Milito, therefore it isn't possible to do certain things because I dont have a choice: if I want to play with two players in attack, I line up Balotelli and Eto'o. If I want to play with three, I choose Balotelli, Eto'o, and Mancini. This this situation, Balotelli will always be on the field if we play with two or three forwards. This does not mean that he is already a phenomenon just because he played a fabulous game. Truth be told, he played a fabulous game and after performed a poor week of work.

I value a player for what he does on the field, but also for the work they do throughout the week, every minute that we are here to train. I always say what I think and what the player is worth I say, Mario has played an outstanding game in Genoa, absolutely exceptional, but this week he worked very poorly.

But apparently that doesn't mean Mario wont play. Ever the pragmatist, when faced with the very question, Mou replied: "I have no other options, I will play the strongest."

Not exactly a glowing recommendation. Right now, I have no idea who Mou will play. La Gazzetta thinks we are going back to the diamond with Eto'o and Balotelli, but given Samu's foot problem, Mou may also decide to only play him for part of the game. I will say, Mourinho seems pretty fed up at having Milito and Motta still out. I am too. We really could have used them against Kiev... but we are letting that go... deep breaths... calm thoughts... moving on.

According to Mou, Mario's problem is generational: kids today don't want to work hard and wait their turn, they want everything now. He also hinted that Mario's pushy brothers weren't helping the matter much either as they think too much about money, saying:

"A boy of 19 or 20 years, who has balanced parents that dont think about money, who has siblings that follow his life without disturbing anyone, who has an agent who brings tranquility and proper care; a boy who has the desire o work and to drive a little care and does not think about a Ferrari or a Bentley or the cars that 30-year old players who earn 5 million a year drive, this is the exception and a miracle. ... I realized that this is probably a generational problem and it is very difficult, at this time, to find a 19 or 20-year old player who already thinks like a man. It means finding the exception."

So, there you go, those young whippersnappers are just too darn big for your britches. I am sure all the Liverpool rumors aren't helping matters either.

As for the race ahead, Mourinho said much of what he usually does ("We will face a team of tough players, tactically strong and very well prepared"), pointing out that although they have had all week to train instead of playing midweek like we did: "...we are leaders and usually, in home games, we have a result that we like and it is with this objective that we will face this game."

Lets hope he is right, because I really dont see Siena putting much of a dent in Juve (sorry Siena). Bologna's new coach bounce may be enough to actually hold Samp, but I think any more than two dropped points is unlikely. If we want to hold our place at the top, we have to come out swinging tomorrow. We should be able to score - especially given that we have 10 players up on the board - but I am a little worried about our defense. I know we (along with Fiorentina) have the best defense in the league, but it still feels like we are conceding too many goals - especially at home (3 of the 5 goals we have conceded have been at home), and especially given the level of experience and talent at our disposal.

So, what do you all say, a comfortable win and a clean sheet?

and because I still shake my head in wonder every time I see it: