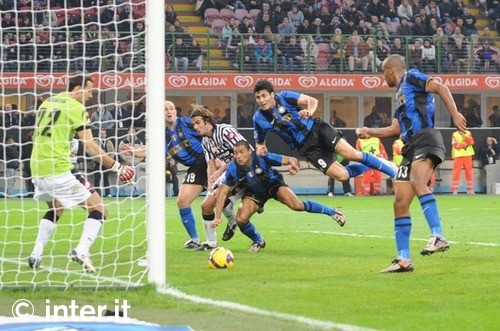 And here we are, back home and raring to go. Sure, we had a bit of a hiccup in Russia, but we are back on home ground and looking to make up some points. That said, we are still in the midst of a mini injury crisis, and Udinese is not a pushover. We come to the game in third place, while they are just 2 points behind us at fifth. They are an organized team with some real talent; luckily, so are we. This will be a great game and the perfect opportunity for Inter to leap to the top of the table (a girl can dream, cant she).

What: Inter v Udinese
Where: San Siro, Milan
When: Saturday, October 3, 8:45pm local time (11:45am pacific, 2:45 eastern)
How to Watch: This time, we're live, baby! Yep, FSC is showing the match live on Saturday. Still, if want, here are some links for streams: MyP2P, Justin.tv, Rojadirecta, Ustream, and ATDHE.net.

Udinese actually has a pretty good record against Inter, even when playing at the San Siro. Of the 37 times that Inter and Udinese have met in the Serie A in Milan, Inter has only won 21 games while they have held us to a draw 10 times (for those of you doing the math, the last 6 we lost). In fact, for the last few years Inter and Udinese have been pretty evenly matched. Last year, we both won at home 1-0; the previous two seasons, we drew all four games (either 0-0 or 1-1). Basically, if history has any bearing on tomorrow, the game will be tight.

Last year's 1-0 win came in injury time with one of Julio Cruz's patented last-minute game-winning goals (I sure miss him):

Well, for a few months last year there was an active Udinese blog. But I think the rigors of graduate school finally killed it off. Anyway, that means I will have to cobble something together.

Marino has called up 22 players:

After a bit of a slow start, Udinese have really come out swinging. They have won their last two games (against Milan and Genoa), and would have beaten Napoli but for a faulty line ref. In any event, they seem to have found their stride... plus, they had a whole week off (what a luxury). The only hitch in their record is that they have only picked up 1 point away from home (thanks partly to that line ref). Of course, they have only played two away games so I think it is a little early to start looking for patterns. One thing is for sure, they will come to Milan looking to win. 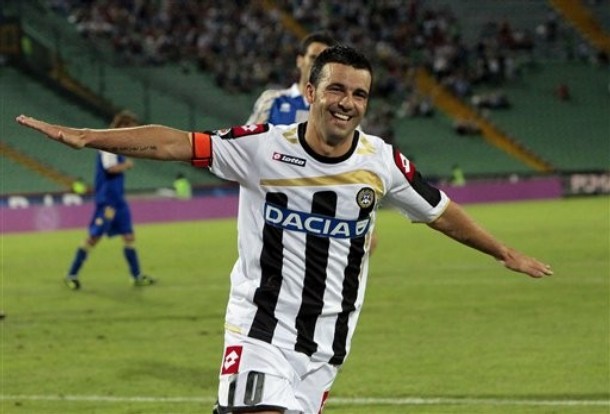 Toto Di Natale could put a serious crimp in our style.

Marino has promised an open, attacking game against Inter, saying:

“The two performances we put in against Inter last year give us confidence and also for this reason I say that if we think about defending for 90 minutes we'll almost certainly concede a goal. Moreover, if we never attack, we'll allow them to become more lucid and reactive in our half of the pitch. Sure, the moves will have to be more fluid and quicker, but we have already limited very offensive teams like Milan and Genoa, and that's a good sign."

Udinese have scored 10 goals in 6 games, almost all of them from Mr. Christmas himself, Antonio Di Natale. They tend to score throughout the game, but their most prolific period is the last 15 minutes. In terms of conceding, they are most vulnerable in the first 15 minutes of a game or the last 15 of the first half. I guess that means they take a little time to get into the game, but once they do, look out! 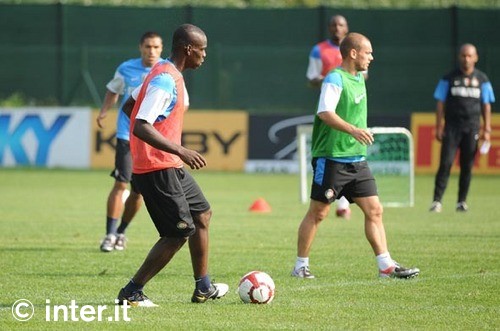 Sneijder is back. Yipee

As we can see, both Milito and Sneijder have recovered enough that they are back on the call up list, although Milito will have to pass a fitness test tomorrow before he takes the field. Interestingly, Mourinho said today that if Milito cannot play against Udinese then he "cannot go to play on his National team and will remain here with us to recuperate." (as an aside, Milito is our only Argie Maradona has called up)

Maicon is suspended due to yellow card accumulation. Mourinho has said that either Zanetti or Santon will fill in (duh).

That leaves us with:

I can live with that.

In today's press conference, Mourinho was quick to point out that Thiago Motta and Sneijder were brought in this season not because the club likes to spend money, but because they were necessary for the team (go figure). Further, the times we have played well, both or either have been on the pitch. Therefore, it is only natural that the squad will not play as well without them as it does with them. I have to agree, and it makes me feel more confident to see Sneijder and Milito on the call-up list. 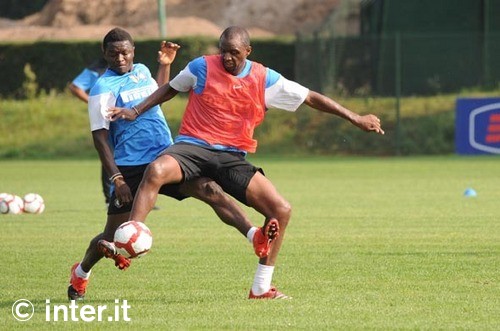 Vieira, is that a threat or a promise?

In other news, some bench-warmers are beginning to get a little antsy. With the World Cup coming up, players are beginning to fret over their places on their national teams. As such, they want more pitch time. Both Vieira and Suazo are saying they will be entertaining offers this winter.

In the case of Suazo, it is difficult to miss what you dont know. It has been so long since he has played for us that I cannot really say whether I want him to go or stay. If he does go, though, most certainly we will need another striker. Vieira, on the other hand, is being a whiny little child. In my opinion he has seen far too much of the pitch (239 minutes by Mou's reckoning) and if he wants to go, I will personally fly to Milan and hold the door for him (to keep it from hitting him in the ass, of course).

Ok. So where are we. As always, our next game is a "must win." Udinese is an organized team that, for one reason or another, Inter has had a tough time beating these last few years. I think it will be tough, but I also think we will be up for it. We have had an extra day off, and I think the boys are ready to give their all.

And since we all need a little fun after that Kazan game, I give you: Inter Manlove Flash Puzzle! Enjoy.