Um.... I Guess I Should Write Something Already

Share All sharing options for: Um.... I Guess I Should Write Something Already 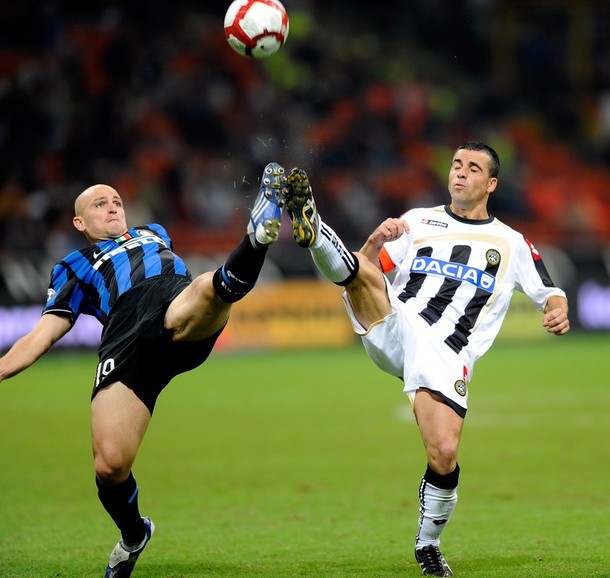 Just because we are on an International break doesn't mean that I can totally slack off. True, there is not a whole lot to talk about, but those of you who have been around here for a while know I rarely let that stop me. Oh, and the picture has nothing to do with anything, I just liked the composition.

Thanks to the insanity of Maradona and some untimely injuries, we only have 10 players out of town these next two weeks (all times are local):

Holland: Wesley Sneijder
-- Australia v Holland, friendly (Sydney, Saturday 10 October at 19:30)
(this one totally ticks me off. All the way to Australia! For a FRIENDLY! Crazy. He better not come back injured.)

Milito and Lucio were also called up but are too injured to go. Word on the Argentina blog is that Zanetti is in Buenos Aires anyway (and I think it may be true because he certainly isn't in any training pictures) just to watch the game.

Personally, I think it is a bit of a tragedy that Pupi wasn't even called up. The folks over that the Argentina blog have been saying that Maradona dropped him because he wasn't "loyal enough" (whatever that means), but that seems so unlike Pupi. Even Cordoba thinks it is odd. He had a little interview with FIFA about his upcoming WQ Qualifiers where he was asked about Argentina's struggle to qualify, Cordoba said:

"To be honest, I’m more surprised that Zanetti was left out of the squad than I am about Argentina’s overall situation. They can still qualify, but I’m sorry to see that such a great captain and genuine person like Javier won’t be involved. He wanted to be in the thick of it, he’s not someone who disappears when the going gets tough. He’s a friend and a role model to me."

Man. I want Argentina to qualify because I think they are a great footballing nation, but I hope Maradona crashes and burns. No one treats my Pupi like that, no one (fist shaking).

Well, the days are getting shorter and here in Seattle I had to turn the heater on last night so it must be time for... MERCATO MADNESS

Yep, nothing screams International Break like stupid transfer rumors - especially given that the market doesn't even open for another three months. So.... 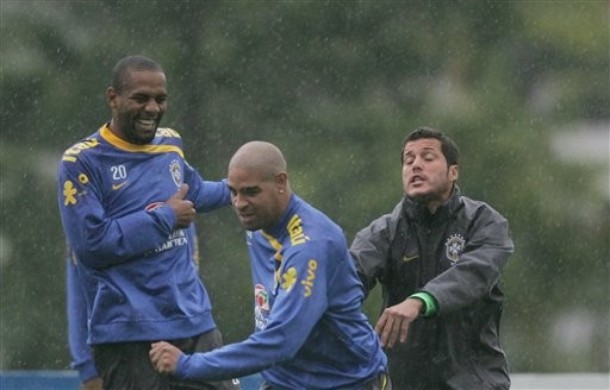 Now, I have nothing against Adriano, but if JC wants brains he may be going after the wrong person here.

Maicon's agent is still harping on about all the huge clubs that want him. Last time it was Real Madrid, now it is Manchester United.

Susana Werner inadvertently brought down a media storm around when she made an off-hand remark in her personal blog that ManU had also been bombarding her husband, Julio Cesar, with offers. She has been quick to back peddle saying that she only brought it up because it means he is a good keeper and she is proud of him (fair enough). He has "denied everything" and Branca is working on a new contract for him. So, miniature made up crisis averted, whew.

Liverpool has apparently shown interest in Rene Krhin, but he has "no intention of leaving Inter" and will sign a new contract in the next few months. I have no problem with this - he is a promising young kid and I would like him to stick around.

Everyone that hasn't gotten a whole lot of playing time yet is supposedly leaving in January (Vieira, Quaresma, Mancini, Suazo, Arnautovic). Ya, 'cause after ten games (counting supper cup) everyone can already see who will play the next 40 or so, right (estimating here, kids, dont rip on me for having the wrong number of total games)? Cripes. Funnily, the only actual player who has said they are thinking about leaving is the one of the bunch who is actually playing somewhat regularly (that would be Vieira).

Oh, and also now Muntari's agent is supposedly in talks with Tottenham. I know he has had a couple not so stellar games, but I would hate to lose him after only one year. I quite like him.

And here is a little bone for MAD: according to a headline at La Gazzetta, Inter likes Gallopa:

During these two "off weeks" Mourinho has a whole passel of youth players training with the first team. Everyone has been preparing for a friendly this Saturday against Piacenza (at the Stadio Leonardo Garilli in Piacenza on Saturday 10 October, 4pm local time). I have no idea if the game will be broadcast, but I will do my best to find out for you all.

Thiago Motta is working his little heart out (double sessions today), as is Milito (who wants be ready for the game against Kiev on the 20th), but despite their best intentions, probably neither will be back until November. Grrrreeeeaaaaat.

No word recently on Lucio but I dont think his injury was that serious.

Well, I guess that is enough to keep us all occupied for another couple days.

And I leave you all with the almost unbearable cuteness of Jose Mourinho at a "press conference" with children. It is in Italian, but here is a barely passable translation of some of it. Really, it is tons more lovely than they make it out to be.
Just watch: