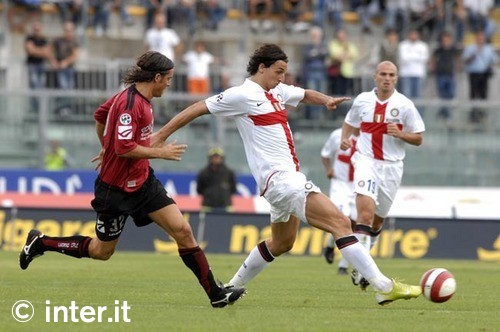 As I write this, Juve have just fallen to a resurgent Napoli and we have a golden opportunity to go five clear at the top (or more, depending on the Samp result). I know I always say this, but I think this will be a tough match - or at least a match to test our mettle. It is sometimes these bottom-table teams who rear up to bite an overconfident or unsuspecting team in the ass. Add that to a rotation squad with one eye on the midweek champions league game and I think you all see what I mean.

What: Livorno v Inter, Matchday 11
Where: Stadio Armando Picchi, Livorno
When: Sunday, November 1, 3pm local time (6am pacific, 9am eastern)
How to Watch: Live on FSC, or on the internets (MyP2P, Rojadirecta, Ustream, and ATDHE.net).

Last time we played them at the Armando Picchi things got a little tetchy. There were penalties all around, a red card, a goal was disallowed (Ibra was offside), and Roberto Mancini was driving me mad with his inscrutable substitutions. But what I remember most about this game was how terrible Aparecido Cesar really was (I am getting a bit worked up just thinking about it now). I can usually find some redeeming qualities about any Inter player - the fact that they play for Inter is certainly a good start - but this guy, he was just so bad. He is like that cousin that you know you are supposed to like because they are family but you just cant because he is such a hateful jerk - lets just say we never bonded. Anyway, he was bad in this game. Here are the highlights; you will notice that he does not feature:

Livorno is not doing well this season. They are third from the bottom on the table and have only scored four goals. Yep, four goals from 10 games. Not good. A couple weeks ago the club took matters in hand, though, and fired their "coach, " Gennaro Ruotolo (remember, he is the guy without the proper credentials to actually coach in the Serie A). They hired Serse Cosmi and things have been looking up. Cosmi has a great record in helping teams achieve great things: he took over Udinese and they beat Sporting Portugal and after taking over Brescia, they beat Juve 3-1 in Serie B! Under Cosmi, Livorno has won their last two (against Atalanta and Roma), doubled their goals scored, and all without conceding themselves. As Mourinho says, Cosmi is a wizard. 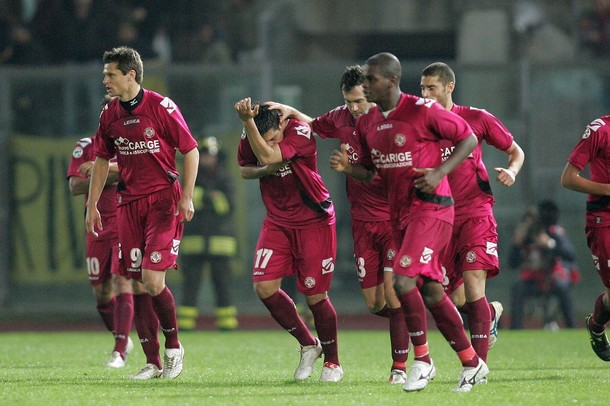 Livorno may have finally found their footing in the Serie A.

Mourinho's take on the upcoming match and Cosimi is that:

"...he has won two games after just arriving, bringing different ideas of play, building a very solid defensive team that defends with many and that arrives in the attacking zone three or four times, scores a goal, then closes even more. I was never in the stadium in Livorno, but it seems a simple field in the atmosphere, size, and the adversarial public. It will be a tough match. " 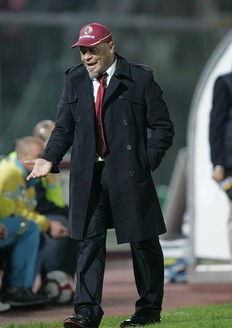 I have not been able to find a call-up list, but Cosimi dropped some hints today at his press conference:

"Usually I present the 3-5-2 against everyone even if we can employ two or one point with an added midfielder like Pulzetti, like was deployed in Rome." He added that Danilevicius, Tavano, and Rivas will likely play, while Lucarelli will not (he is suspended). I am very interested to see if Rivas has improved with his time in Tuscany.

Given all of that, La Gazzetta has come up with:

Aside from not scoring, Livorno actually have a pretty good defensive record so far. They have only conceded 10 goals (as opposed to Genoa who have 20 or Bari who have 7). It appears that they are starting to find a system that works for the team. Two 1-0 wins dont look all that convincing, but when you look at what came before, they are stupendous. 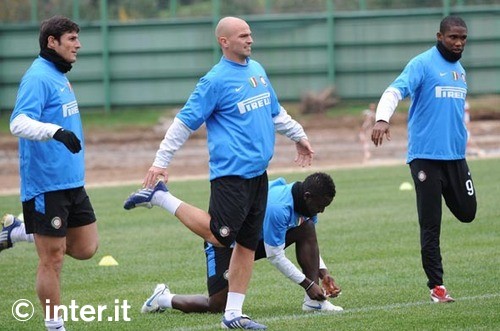 With an eye to the midweek game, Mourinho has mixed it up a bit with the callup list:

Clearly, there are a few names on the list we are not used to seeing and some notable absences. First, Santon and Balotelli have been left home. Mario is unwell with the flu and his allergic reaction so has been sent home to get better. Santon, on the other hand, is having some mental difficulties (Davide non sta attrversando un momento di tranquillità) which, according to Mou, have been exacerbated by the "lies" printed on the front page of La Gazzetta. He said that the press paid far to much attention to both Santon and Balotelli, especially given that they are just boys. And then things got really fun.

Can you explain what this lie?
"On the first page of a really important and credible newspaper it has been said that after the game against Palermo, I phoned the player to talk about what had happened on the pitch."

It was not Mourinho who phoned the player?
"No. I talked with Santon yesterday for an hour in my office, face to face with my assistant coaches who are Italians and who have known him for many years, they were the boy's coaches and they have the rapport of a friendship with him that has lasted for years. "

In this possible lie, which it is in your opinion while in the opinion of us journalists, it isn't, what is so bad?
"Are you the lying reporter?"

Yes, I am the journalist, but it has not been said that I was the liar. But what's so serious in the news reported today?
"If I'm the liar, I can not answer"

So there you nasty journalists. Quit bugging our babies or Daddy Mou will come down on you like a ton of bricks. I just love him.

Eventually, he did get back to the game and formations. He had wonderful things to say about Materazzi:

Materazzi is an intelligent person: he is aware that he has had a fantastic career and that now his is a role of a man important in the squad and in the dressing room and for his coach and this is a player who, when he plays, he always does well. And so he did last year when he took the field, for example against Juve. This season, for example, in the game against Catania, when he was on the bench, his squad was in difficulty and the coach had need of a defensive reference in the game in front of Plasmati, he was on the pitch 10 minutes and had absolute control of the situation. He has been called up for tomorrow, he will be for Kiev as well and he knows it. He is a player that is always available and that I consider indispensable. Sometimes you think that only those who are indispensable in the field are essential, but for me, so is Marco.

I know that he is just a shadow of what he was, but he was pretty great - the shadow should at least be adequate, right? As for everyone else, Mourinho said they were largely precautionary. Livorno is far enough away that he doesn't want to get down there only to have a player come down with the flu and no understudy available. 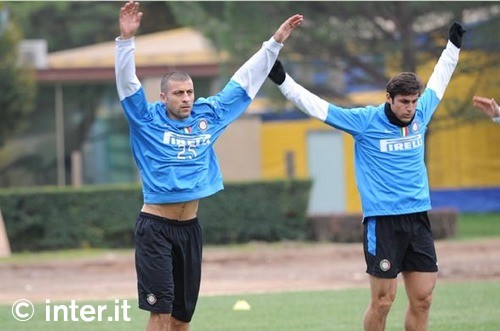 Raise your hands, who wants to win tomorrow?

As for the upcoming CL game with Kiev, we still dont know whether it will actually happen. The Ukrainian government says no, UEFA says yes, Mou says someone better decide right now 'cause we are supposed to leave on Monday. I think that with all the difficulties in scheduling, it will happen but the venue may be moved. We will see.

So here is where I would usually put a lineup, but looking back over my last bunch of previews, I tend to totally suck at it. Most of my lineups have been flat out wrong so I am not going to bother today. I guess we will all just have to wait and see tomorrow morning.

As I said above, this will be a test of Inter's depth and mentality. I think Livorno will play a very defensive game and hope to score on the break. Still, they play with a 3-man defense, and looking at our record against other teams who play that formation, Inter is quite good at exploiting the gaps. If we can keep our head in the game and not on next Wednesday, we have a pretty good shot of increasing our lead. If we play like we think we are better than they are, they will show us just how wrong we are and slap us down. I will be quite upset, though, if they score on us. We have just got to do something about the goals we are hemorrhaging.

Personally, I will be snug in my bed, sound asleep at 6 am. I suspect that there will more than one of you out there who will be in an alcohol stupor (if you are not already) so will also be AWOL for the match. Just remember, dont pass out with candy in your mouth - milk duds are almost impossible to get out of your hair the next morning. Blech.