Share All sharing options for: Barçelona v Inter: With Happiness and Serenity 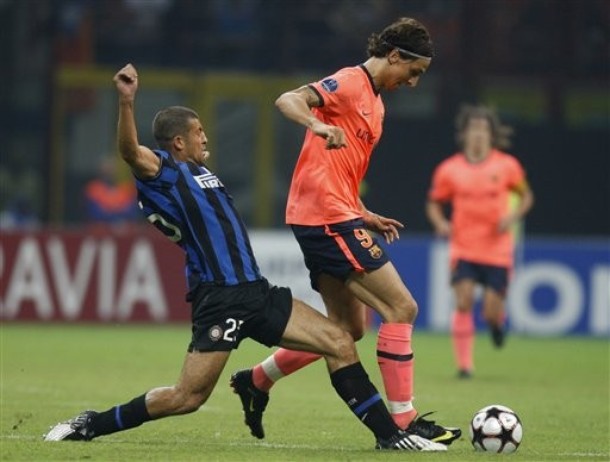 Off we go to sunny Spain (or Catalonia for you separatists) to take on the very best club in the world on their home ground. It is all a bit daunting. Barcelona have some injuries/illness problems, but are for sure the clear favorites in this match-up. Besides the fact that practically their whole team has been shortlisted for the Ballon d'Or, this game is a must-win for them to make it out of the group stages. That means our boys in black and blue will be up against most of the very best players in Europe who will be highly motivated to win at all costs. Yikes. This game will either be epic or a totally beat-down. Either way, I am glad that I am not emotionally invested in the Champions League. If I were I am sure I would be chewing my nails by now.

What: Barcelona v Internazionale, Champions League Group F Matchday 5
Where: Camp Nou, Barcelona, Catalonia (otherwise known as the belly of the beast!)
When: Tuesday, November 24, 8:45pm local time (11:45am pacific, 2:45pm eastern)
How to Watch: Live on Fox Sports Channel (in my area that means HD!) or ppv online at UEFA's website ($9.99). To watch on line for free, find a stream (MyP2P, Rojadirecta, Ustream, and ATDHE.net).

Shamelessly cribbed from Chris over on the main board:

Just to warn you all, my work schedule is brutal this week. I dont have a whole lot of time right now so this will be a bit short. Sorry. For everything you could ever want to know about this match, be sure to check out the press packet that UEFA puts out (pdf is here). It is exhaustive. 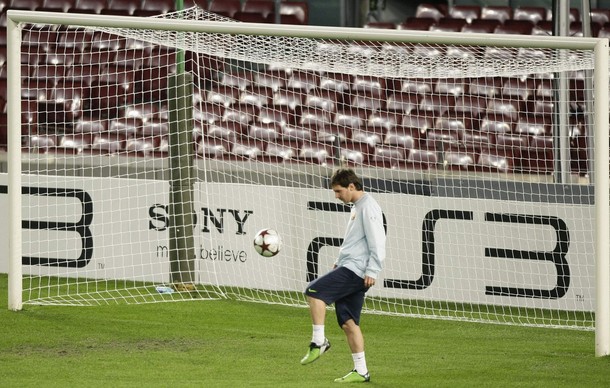 He doesn't look particularly broken to me.

I am not even going to bother with much here. Ramzi has done a bang-up job over at the Barcelona board and I suggest everyone go read it.

As far as I am concerned, the only news that concerns us is who will be fit to play tomorrow. According to UEFA and Guardiola, the only player who is definitely out is Yaya Touré. That leaves five players to be evaluated before the game: Lionel Messi (groin), Gabriel Milito* (knee), Eric Abidal (left thigh, illness), Rafael Márquez (illness), and Zlatan Ibrahimović (hamstring).

*Brother to our very own Diego Milito. Small world, isn't it?

Frankly, I think that if Messi and Ibra can walk, they will play (both trained today). Everyone wants in on this match, even if it means exacerbating an injury. I will be interested to see who will finally makes it to the pitch, though, especially given that Barca plays Real Madrid (who are one point above them in the standing) this weekend. As I said before, a part of me wants them all to play so that when we beat them (lighting candles, throwing salt, doing ritual dance) we will know we took them all on. The other half of me is thrilled at the possibility of no Ibra and/or Messi just because it may make everything just a little easier (I am not proud of this half, but what can I do - there it is).

All the interviews with players that I have read recently (Ibra, Iniesta, Maxwell) show them to be very confident and 100% convinced they will win. Given that the sun shines out of each and every one of their behinds, who am I to argue with them? I will say, though, that if Kazan can do it, so can we! 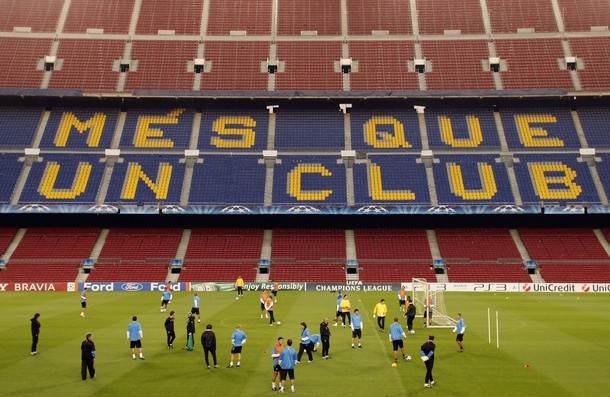 Ok, that stadium is a little intimidating after all.

Mourinho has brought just about everyone to Barcelona for the big game:

The only ones not in Spain are Davide Santon, who is still recovering from his knee surjury, and Obi, who is likewise still injured. If you recall, Arna was not on the Champions League list (although he could be added if we make it out of groups). 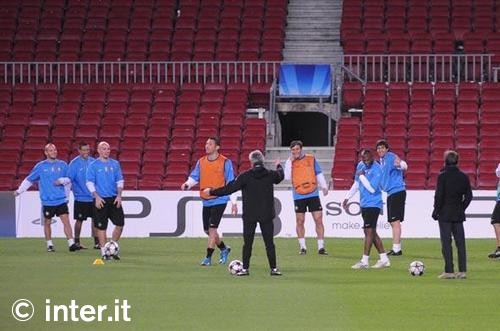 See, Wesely is training with the squad - that's a good sign, right?

At the time Mourinho had his press conference, there was still some doubt over Sneijder's fitness. It looks like he trained with the squad, though, which I will take as a good sign. Everyone else on the list is A-OK (knocking more wood and looking desperately about for some sort of offering to burn). Mourinho seemed calm and collected today at the presser, saying:

"Even if we didn't need points, for me a Champions League game is always a Champions League game, Barça are always Barça and I'm approaching this difficult game with happiness and serenity... My preparations for the match won't depend on the presence of Messi. Chivu will play on the right, so it's Julio Cesar, Maicon, Lucio, Chivu, then the others... I have forgotten them. Zanetti? He's important, he's the history of Inter. This match will be difficult from every point of view because Barça are strong as a team and individually, because this isn't a normal stadium - it's a voice of one hundred thousand people who want to play and win, who put real pressure on everyone, even the referee, for whom it's not easy to make decisions. It will be a difficult pressure, but a pressure that we have to face with decision and serenity. We spoke about it today with the players, I'm expecting the right reaction from them.

I faced Barcelona six times with Chelsea and now I'm here with Inter. It's a pleasure to play in such a tough game. I enjoy tough games more than easy ones when you win by four or five goals. All my players want to play in this game – it's a game that appeals to everyone. I don't know if we will play to win or to draw: there are risks with both and we will see how the match develops. The world of football hopes Barcelona will get through, but Barcelona are aware of the difficulty of the match – they know Inter are a major rival. If Rubin win then Barcelona will be in trouble, but they're not scared and neither are we. I think we have grown as a team [since Matchday 1] but the only thing we want to know is whether Sneijder will be fit to play or not."

For all you line-up junkies, now we at least know the back line (not much of a surprise). Unfortunately both Chivu and Maicon are a booking away from a suspension. If both get carded, we are in real and desperate trouble against Kazan. But lets not worry about that now.

Despite what he said about serenity, Mourinho was worried (or curious) enough to engage in a little voyeurism of his own against Barcelona. Apparently he hung out, unseen, on the steps of Camp Nou and watched Pep's training session. Hey! We need every little ounce of help we can get! This is Barca-freakin-lona we are talking about, after all.

Even so, I am also expecting the right reaction from the squad. Everyone seems up for it and we must shake off this European funk once and for all. I can see how it happens, though. I, too, sometimes still think of our little team as the perennial also-ran from the wrong side of Milan. Maybe we respect our opponents too much - maybe the squad should indulge in some of that over-confident winning certainty that teams like Barca, Chelsea, and ManU seem to exude. I mean, if the only reality that exists is victory, how can you lose?

Everyone think the happiest most supportive winningest thoughts you can.

Let us all take comfort in Javier Zanetti's massive thighs: 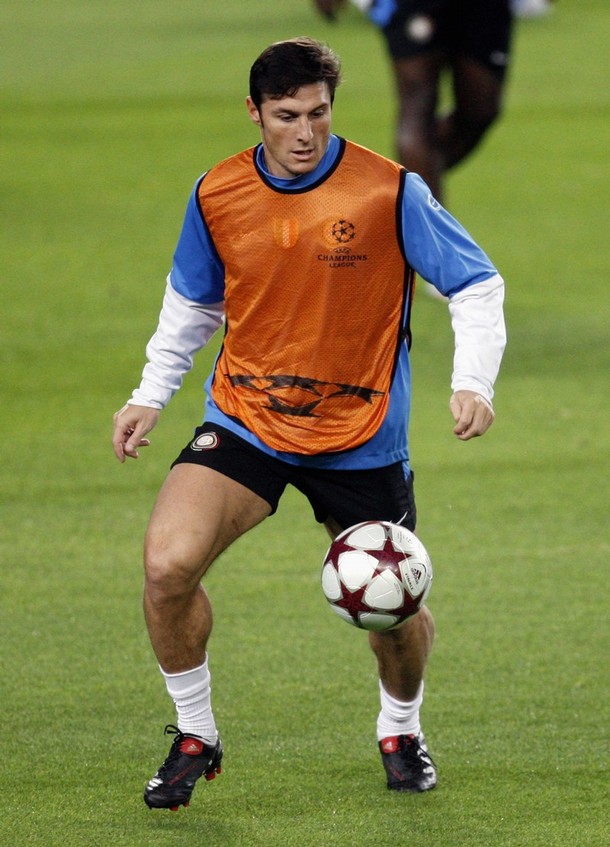