Share All sharing options for: Dynamo v Inter: One More Shot at Redemption 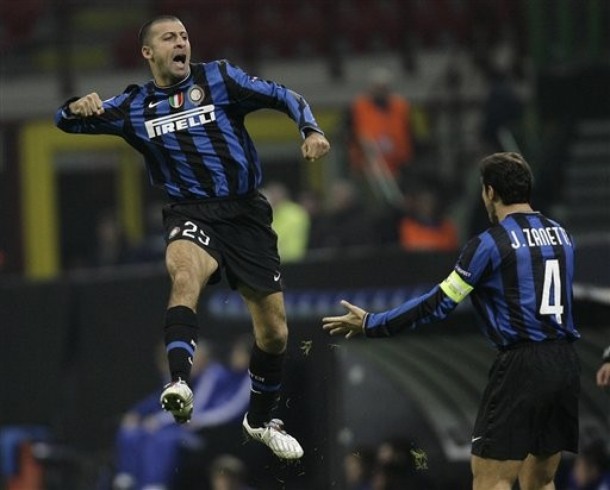 Inter are going back to Russia (ok, well Ukraine) to see if we can finally find our footing in Europe. We have not exactly excelled, and our high-flying Serie A position will not count for a hill of beans. It will be cold, and Kiev is a good team, but the boys are up for it and I am going to give them all the support I can (whether it helps or not).

What: Dynamo Kiev v FC Internazionale Milano, Group F Champions League Matchday 4
Where: Valeriy Lobanovskiy Stadium, Kiev, Ukraine
When: Wednesday, November 4, 8:45pm local time (11:45am pacific, 2:45pm eastern)
How to watch: FSC is showing the game at 10pm pacific, 1am eastern. If you want to watch it live, you can see it ppv at UEFA.com ($9.99) or try to find a stream. (MyP2P, Rojadirecta, Ustream, and ATDHE.net).

Right. So we haven't exactly made Europe our bitch or anything. Still, we haven't completely embarrassed ourselves either (well, the Lucio own goal was pretty bad, but it so could have been worse - it could have been the winning goal). Still, our position is precarious and this game is very, very (very very VERY) important. Basically, if we don't pull a win out, then bye bye CL dreams. No pressure,though.

Last time we met, we just about had them but for a slip of the head by Lucio. In the end, Inter and Kiev shared points with a 2-all draw:

Ok, confession time: I haven't really been watching our Champions League matches.
There, I said it.
I think that the only one I watched from start to finish was the first Barcelona game. After that, I watched a bit here and there, followed the game on the UEFA live match thingy, but I have not really watched any of them. To tell the truth, I am having a hard time really finding the will to care. I mean, I would love to finally win a game (winning is always fun), but... well, the champions League just doesn't mean anything to me. I know, all you Milan and Juve fans are saying that is because Inter hasn't won one in recent memory - if we had, I would be pumped to win another. And I am sure that is probably the case. To me, the CL has always been like winning the lottery: it would be fantastic, but I am not holding my breath. Still, I know that other, more sports-savvy minds than mine say it is important so I will play along. That, and I wholeheartedly support my team in all of their endeavors.

So if I seem a little blasé, you all know the reason. 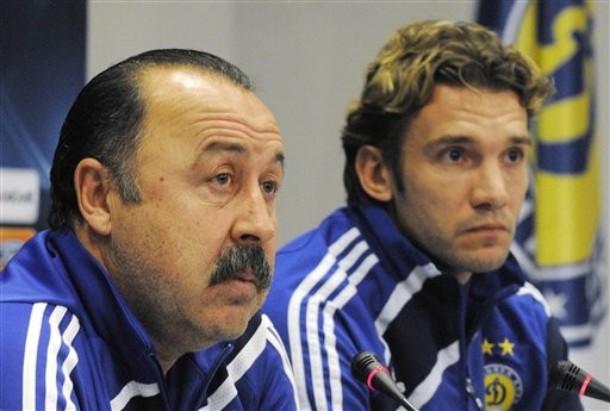 If this were a Mustache-off, that man would win the blue ribbon

Not all that much has changed since I wrote the preview for the home leg of this tie. I still dont know who any of these folks are (aside from Shevchenko), and their coach still has an insane amount of facial hair.

In addition, Leandro Almeida, Gérson Magrão, and Artem Milevskiy are a caution away from suspension.

Apparently, Dynamo have not done all that well in their last two fixtures: they went down 0-2 to FC Shakhtar Donetsk in the Ukrainian Cup and held 1-1 by FC Karpaty Lviv in the league. Gazzaev says all this adversity has just made them more motivated for this upcoming game. Great. 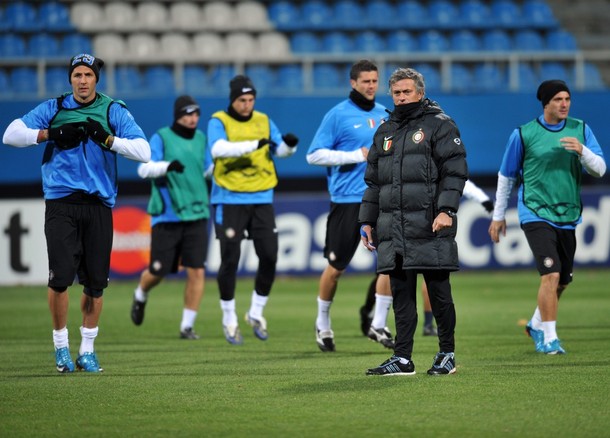 Only Marco would have a huge #23 hat.

Well, Mourinho brought just about everyone with him for this match, fit or no.

Even though they went to Kiev, Thiago Motta (thigh), Sneijder (thigh), Muntari (heel), Chivu (thigh), and Balotelli (flu) are all in doubt. Mourinho said:

"I am only concentrated on Inter and today I want to see if the five players that I currently have in doubt will be able to take part in the game. I will talk to them after dinner, face to face, me, them and the doctor, because who goes on the pitch tomorrow will have to be at one hundred percent, and because it's too important a match to have uncertainties in the hours before the match. For all of them I need replies in the last training session."

So, we just wont know until tomorrow who will actually be available to play. T.Motta says that he "feels well" but I guess it is up to the doctors. I certainly dont want him to play before he should. The Chivu news, on the other hand, is new to me. I had no idea he was hurt. I guess now is the time for Santon to find himself. Either that, or Zanetti will play again in defense.

Both Chivu and Maicon are a booking away from missing a game. Chivu we could/can probably do without. Maicon would be a blow. Vinod has kindly pointed out that our next CL game is actually Barcelona, so Maicon had better mind his Ps and Qs. 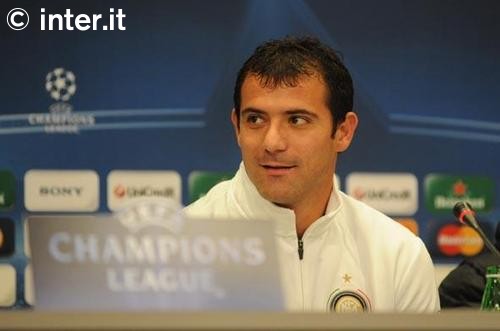 For those of you who are worried about what our less that terrific start to the CL campaign might mean for tomorrow, take hear! Stankovic says:
"We will do everything to change this start to the European campaign and win tomorrow. We have worked a lot on this aspect and we know where the problem lies."

See, problem has been identified, and you know what they say: Knowing is Half the Battle.
Scoring lots of goals is probably the other half (or, maybe scoring goals is 32.5% while keeping their goals out is the last 17.5%). Luckily, Mou has that covered as well, saying: "What do I want? I want to score a goal more than Dynamo. Nothing else."

Lineups are a bit tricky at this stage, what with so many players on the maybe list. If anyone wants to hazard a guess, go ahead. The right one gets bragging rights for the rest of the week.

As for the stadium situation, it looks like the game will go on, as planned, with the doors open. The Mayor of Kiev had suggested that the game either be canceled or played behind closed doors, but both clubs and UEFA were none too keen on that (football stops for no man - no matter what infectious disease he may have). Basically, there have been 67 flu deaths in Ukraine this fall, which, according to the Deputy Health Minister, is not much different from previous years. Just in case, though, Dynamo (the club) has purchased 20,000 face masks to hand out to fans and the stadium staff for the game and the Mayor of Kiev is still telling people to just stay home. 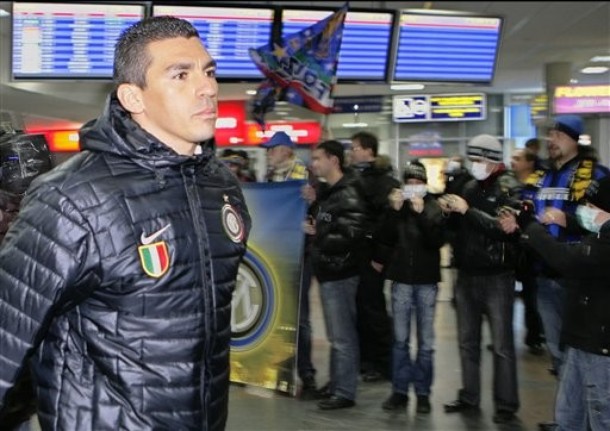 It may be cold outside, but it looks like Lucio got a warm reception at the Kiev airport. The masks are a bit worrying though.

Anther issue for our boys will be the climate. According to The Weather Channel, it will be about 29°F (feels like 23°F) tonight. Nippy. At least it will be dry - no one is ready for snow.

Everyone appears prepared for the cold (love that Inter-branded puffy coat, Lucio), but I cant help but think our Brazilians will suffer. Julio Cesar is ready, saying: "I will have to cover myself very well in Kiev, I have already packed so many sweaters and protective cremes, we hope that the boys do not make me suffer in that climate too much..."

Despite what Michel Platini says or thinks, F.C. Internazionale Milano is not in debt. Now, we may sometimes return a loss, but Daddy "Deep Pockets" Moratti is always there to cover the shortfalls. Inter does not owe anything to banks. 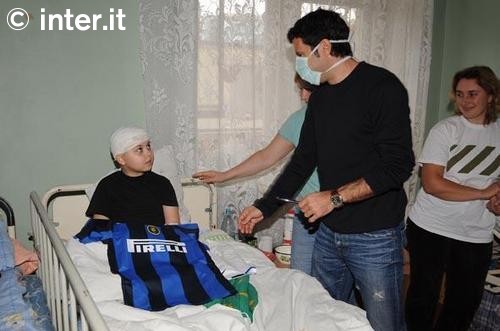 Today was Luis Figo's 37th Birthday. In true famous football form, he spent the day visiting sick children at the Institute of Neurosurgery at the Medical Science Academy and the Soleterre charity's hospital in Kiev. Wow. I love Luis Figo. I am so glad that he is hanging around with the club.

Alrighty. To recap:
- Important game.
- Chance for redemption.
- Gotta win (but no pressure).
- Having a hard time working up the will to care - but I will. Important people say it is important so I will find the way.
- Deki is gonna solve all our problems
- FORZA INTER