Well, we didn’t beat an opponent in the bottom half of the table. This would mark the first time this season that this has happened. A quick look at MAD’s Guide to the Scudetto shows that beating teams the show themselves to be in the second column of the league table home and away is one of the secrets to success. We didn’t do that today. We now have to hope that Juventus and Milan will stumble as well.

We didn’t play particularly well, as in at all, but I think that we put together 3 very credible goal scoring chances. We made one, we pushed one way wide and a goalkeeper save stopped the other.

We played about even in the first half when we played our worst and with the incredibly defensive minded midfield of Muntari, Motta and Vieira - who I was so very happy to see, of course. Which was a bit sad for both teams. We didn’t really do anything other than try to get out of the first half with a draw. Roma – who jeered at us for years about style over substance - defended 9 men to within an inch of its life and counter attacked only for a miracle of a goal. A little hypocritical, wouldn’t you say… oh, and welcome to the dark side of results oriented football. Good luck on the transition.

In the second half we put in the cavalry but the attitude was the same, "Its vaca time". We got a goal, mostly because losing to Roma shouldn’t be an option and pride wouldn’t let it happen.

So we screwed the pooch on this one. We had help doing it – I am sure the League/pundits/neutrals are happy that we dropped points - but the pooch continues well screwed. Inter player of the match, is there any doubt? Not many decided to show up today, even though it should have been enough to finish off Roma… 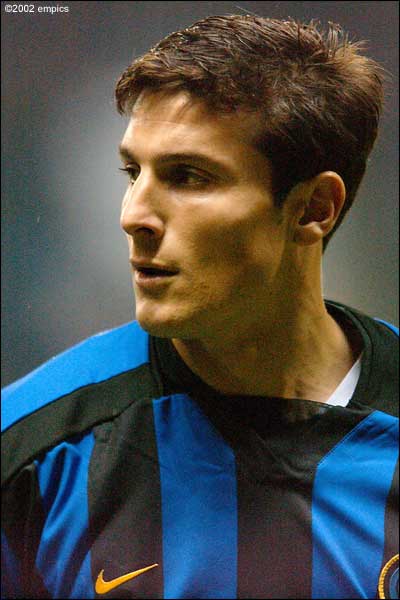 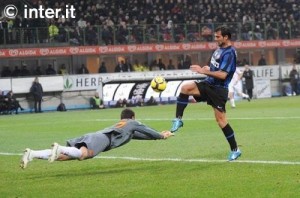 So, we led the game in possession, fouls against and yellow cards received. Apparently we have been fouling people while we have possession. If you happened to watch the “pundits” after the match, there was a lot of heat on the ref for blowing the whistle so much for little things, especially as there was a movement by Collina to let play go and not disturb the flow of the game as much as possible, and for not getting the bigger fouls at all. Flow was allowed for one team, as the statistics show, so Collina can’t get too upset. The statistical findings that on average two teams will commit about the same – not exact, but similar - number of fouls a game was apparently lost on this sap. As was the plot.

Cesar: I can’t blame him for the goal, it was a once in a lifetime shot by a guy not even looking at the net. He made a mistake in distribution, though. 6.5

Maicon: Anonymous and on vacation a too early. Roma played with one forward/player out of their own half of the field and Maicon had little in front of him defensively, he could have pushed up more. 6.5

Lucio: He recovered well to save a good chance from happening for Roma after he fell asleep on Vucinic. He should have been in better position – although that’s not really his game – on the goal. He was targeted by Roma. 6.5

Samuel: Didn’t have much to do but when he did it, he did it well. Considering all the relationships between the players of both teams, Samuel didn’t seem too happy to see his old club… 7.0

Zanetti: Was the best defender on the field and schooled Menez about 5 times on the left – oddly Menez/Nedved stayed on his feet when going up against Zanetti. More on that later. It also looked like he took an injury. It’s always obvious when the team plays without the same spirit that he has. 7.5 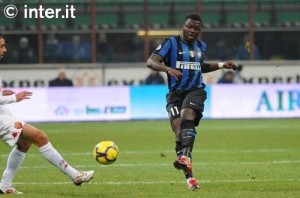 Muntari: Delicious on the tackle, bitter on everything else. He was called for a foul when he jumped around a Roma player and got the ball and nothing else. Typical. 6.5

Motta: The good Motta on the pitch made the pass that got a goal. He got a yellow for impersonating John Arne Riise without ginger. 7.0 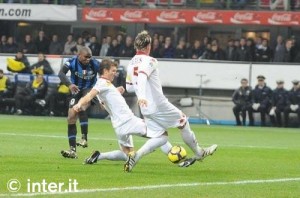 Eto’o: He scored and that deserves praise. He shanked a volley that most strikers dream of getting and that does not. He disappointed me today. 6.5

Milito: Milito suffered the same problem that others of his stature suffer. He’s a little undersized and that makes him a target. Unfortunately he blew his chance to rub their faces in it. 7.0

Balotelli: Like Eto’o he disappointed. He had a shot at a striker’s goal at the top of the area, with tons of space and at a slight angle… and he really blew it. I agree with Mourinho here… he should have been in better form considering. But this is the danger of playing young players. They are ALL less reliable. 5.5

Cambiasso: Took over the middle of the pitch but the results don’t show much had changed. If he were on earlier, it wouldn’t have mattered. Roma were playing longball to bypass their own midfield which they had sucked back for defense anyway. He might have made a better contribution on our offensive end… but we didn’t really have one. 6.5

Sneijder: Made an instant difference in the team when he came on, unfortunately it wasn’t that much of a difference. We went from bad to average-ish bad. Still, average-ish bad was enough to score and keep from being scored on by Roma. 7.0 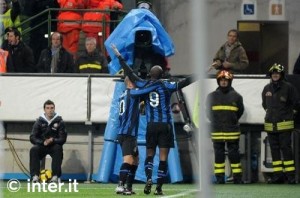 - Menez/Neved didn’t go down so easily when he went up against Zanetti. Either he didn’t think that he would get the call or he thought that he could take Zanetti and wanted to make sure he stayed on his feet to score. It appears that he thought wrong.

- De Rossi had it coming to him. There are those who will say that’s not nice, not classy, but he did. There is only so much abuse that a guy 100s of miles away can hurl at you before it becomes too satisfying to see him in pain 100s of inches from you. He spent so much time flapping his lips in his street clothes; it was pretty gratifying watching them get flapped for him when he finally got on the field within arms reach.

- Why was there no call when Mexes put his hands on Balotelli’s neck? Balotelli was walking away from the situation – you know the kind of behavior we want to see from him. Why isn’t there more outcry that Mexes thought that he had the right to touch another human on the scruff of his neck like that. Why was there no yellow card? Why is there nothing in the newspaper today? Why isn’t Mexes banned for 3 games? 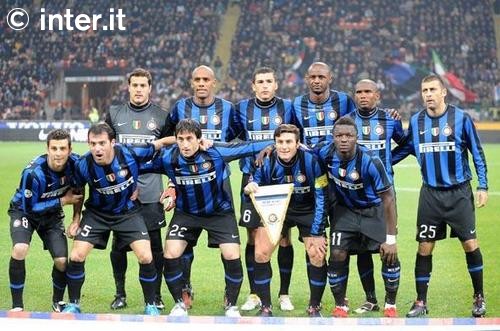