As If We Didn't Have Enough On Our Plate...

Share All sharing options for: As If We Didn't Have Enough On Our Plate...

We Run Balotelli: Arsenal insists on having him, the player wants to leave as early as January. The offer is 20 million. And there is Fabregas. Will Inter resist?

The article then goes on to say that Wenger has 20 million euro to replace Emmanuel Adebayor and he wants Balotelli. What's more, Balotelli wants him back. The article claims that Balotelli "is convinced that Jose Mourinho has not given him adequate space... Instead he sees Wenger as the man for him, the greatest master of developing the young."

Of course, Arsenal are also offering him a large pay rise. Right now, he makes about 1.5 million a year. The Gunners would double that to 3 - which is a hell of a lot of money for a 19 year old kid!

The club is taking a hard line, though, saying: "Either he becomes a champion with us or he does not become one anywhere," essentially closing the door on a January transfer. Come June, though, the club may feel differently. Especially if Fabregas is used to sweeten the deal. 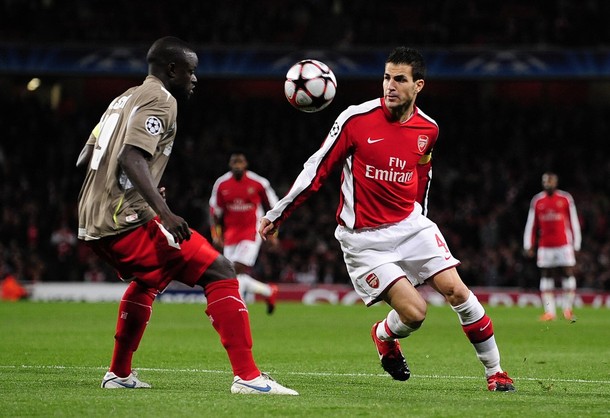 I wonder how he feels being used as a bargaining chip. Besides, is he really worth giving Balotelli up for?

On the facing page of the article above, there is a little run down of Balotelli's relationship with the club to date, entitled: "Escape from Mou. And Now He Must Regain Even the Dressing room"

It seems that Balotelli trained with Primavera squad yesterday, and quite enjoyed himself. Despite his difficulties with (or perceived persecution by) Mourinho, Mario is still working towards a place in the Juve line-up or at least on the bench, although "first he must regain the confidence of most the locker room... People who love him, that sincerely esteem him, but are no longer willing to indulge the whims and attitudes from the Star: they want a quantum leap in terms of behavior."

I guess his attitude is starting to take its toll even with his teammates. With Quaresma out with injury, though, Mario will almost certainly make the bench. If Mourinho were to leave him out solely to prove a point, he would be cutting his nose to spite his face. Besides, Mou's first goal is always to win. If Mario is the best option for victory, he will play.

Clearly, he still has some friends on the team.

The paper even caught up with Marco Materazzi who was in England working with the Red Laces campaign. When asked about Balotelli and any problems with him in the dressing room, Marco brought everyone back to reality by pointing out that whatever is or is not happening with Balotelli, it is nothing in the face of all the children who die in Africa each year simply because there is no one to save them with "two pills and 25 cents." Sobering indeed. He did come back to Balotelli saying:

"Everyone would like to be a starting player but at the end, it is the coach who must make the choice. And when you sign for Inter you already know that you might sit on the bench, go into the stands, or even stay home. There are precise rules and they should be respected."*

*I have the rest of the interview if anyone wants a copy.

Unfortunately, we wont be hearing anything on the subject from Mourinho as he has called for a press blackout until the day before the Juve match. That is one way to minimize the distractions, I guess.

So, I guess the question is: just what should the club do about Balotelli?

Should Mourinho continue to try to convince him to grow up? Or will that only serve to crush his spirit and dampen his creative spark?

I believe he has what it takes to be truly great, dare we let him go?

But why do we want a player who doesn't want to stay? That doesn't help anyone. And what if Wenger really is the best person to develop his talent, dont we owe it to him to let him go where he will grow the most?

Personally, I love Mario Balotelli - warts and all. I would like nothing more than for he and Mourinho to come to some sort of agreement (they dont have to like each other), and that Mario would be convinced to stay - that he would want to stay. Sadly, I think the writing is on the walls for him. At the very least, I think they will send him out on loan - and, if Arsenal will take him for a season, that might work out best for everyone. I sort of think they are looking for a more permanent arrangement though. La Gazzetta says that if the Balotelli deal doesn't happen, Arsenal are ready to offer 18 million to Sampdoria for Pazzini.

ps. After writing this and thinking about it, I cant shake the image of Arsene Wegner as the Child Catcher from Chitty Chitty Bang Bang skipping around to all the footballing nations and kidnapping their young players to lock them away in the Emirates. Creepy, I know, but somehow fitting.