Okay, time to put this puppy to bed.

Here’s the scoop as I see it. All of the Italian teams in Scudetto contention had important games this past mid week. All played their little hearts out and all risked everything to win. Such a huge expenditure of effort and mental concentration takes a toll that 4 or 5 days of half rest - because there is another game to play - can’t heal.

The results were evident this past weekend. Milan and Juve lost and we drew. Why didn’t we suffer the same fate that the others did?

More after the break…

Here’s Inter’s stating back 4 this past weekend: Maicon, Lucio, Cordoba and Chivu.

The point? All 3 teams in Scudetto contention had a center back out with injury - in Inter and Juve’s case it was their best center back and in Milan‘s case it was their most athletic. But we had the best “off the bench” center back of he group. Cordoba could get significantly more playing time with either team than he gets with Inter. But you could also substitute either outside defenders with Zanetti - who had playing time outside last week as well - and he would start for either team on the outside defense too.

The difference between us and the others - and the reason that we put distance this week - is our depth. If Santon gets healthy and is able to contribute in the second half of the season we are going to be golden back there, and not just for this season either.

My Inter Players of the Match 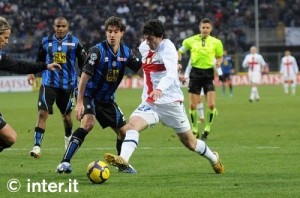 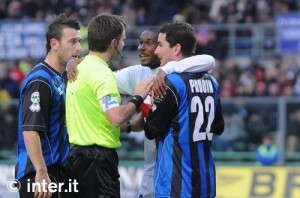 I am not going to go with a pagelle today mostly because this game didn’t really merit it. We played off and on and Atalanta had about 2 or 3 real chances on goal and put one in - although Julio Cesar made a hell of a save in the first half. We had about half a dozen and we managed to hit the woodwork and make a single point. To their credit Atalanta pushed up and forced a lot of corner kicks, which had to be a stratagem of theirs. They were never going to get much with the run of play so increasing the number of set plays is a smart move.

Next up is the Coppa Italia and Livorno. There are some Primavera players called up, lets hope they get some game time in.