This was just a Coppa Italia game, it was against Livorno, and it was a game that Mourinho felt perfectly fine starting a primavera player in the defense.

But, it was nice to see a well played game from the boys out there… assuming you’re willing to ignore all the shots inside the penalty area that went wide, straight to the keeper and off the woodwork.

We were the definite protagonists here, as one might expect we would against a team fighting against the tide to avoid relegation. We had 4 or 5 clear cut chances for a goal that were well developed and had some passing combinations. They had 2 that looked pretty scary.

And the Primavera player, Donati, I thought played pretty well, as we will see in the pagelle.

Player of the game? I don’t think that there is any question. Head and shoulders above the rest for this game: 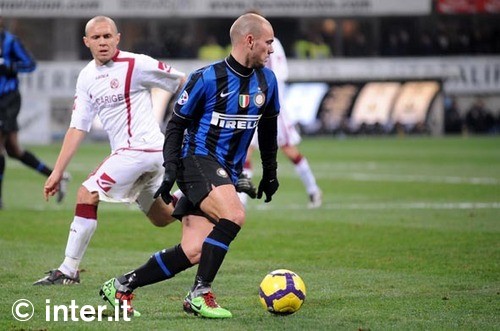 Game highlights after the break. 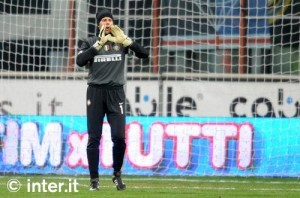 Toldo: Clean sheet, command of the area, good distribution and had a nice save or two. This was a good, professional game for an incredible servant of the club. 6.5

Donati: Once he got over the fact that he was living his dream, playing with some very good players in a pretty important stadium for a pretty famous manager, he did okay. He was quick, had a couple of nice crosses and stayed with his assignment. Inversely, he left some passes wanting, he had a bad clearance or two and outside those 2 crosses he didn’t do much on the offensive end. 7.0

Lucio: Lucio did what he was hired to do. He commanded the skies and he cut out danger before it developed. Neither he, nor Chivu are shut down center backs and I got a little nervous initially, but I didn’t have a reason to. 7.0

Chivu: I like him so much better inside than I do outside. If Santon can get it together and take over outside, I would welcome a center back squad of Samuel, Lucio, Cordoba and Chivu. 7.0

Muntari: Muntari was playing out of position but we play our fullbacks pretty high and he switches back a lot anyway, so he wasn’t really out of position to badly. Here’s the thing though, he doesn’t really have a sense of position out there, and he’s mostly just hustle and pressure. I didn’t think he did too terrible though. 6.5

Stankovic: Deki is starting to fade on us I think. Either that or he desperately needs a rest. It’s becoming a habit that he starts in great fashion, taking some shots and busting his ass to get back, but he’s disappearing in late in games. This bears watching. 6.5

Vieira: I cannot wait to see the back of this guy. I didn’t see him do anything productive other than nearly getting a handling call inside the area against us. 6.0

Motta: I thought that Motta did a good job passing, even if I didn’t think he did anything else remarkably well. It was a solid game from Motta, but I felt that he faded a bit. 6.5 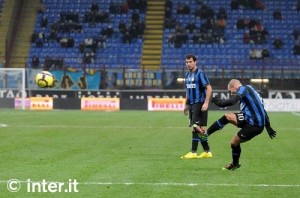 Sneijder: I was really frustrated with him last game where he got himself thrown out, right after he came back from injury. He spends too many games hurt as it is, we don’t need him to lose time in other ways. This game is the reason why. If Cambiasso is the engine in ball retrieval, he is the engine in attack. When he gets the ball his first look is up the field – if he has room he dribbles up, if not he makes room. He holds the ball up, he distributes and he shoots. 8.5

Mario: Another professional game from Mario. He came back to help out the defense. He pressured the ball in the opposition half. He made some nice passes. He took a shot here and there. I could nitpick and say he needed to finish better, but it was a small flaw in an otherwise solid, professional game. 7.0

Suazo: Look, the guy is rusty as hell. This is the second game he’s seen action in this season, I think. He’s a decent player – probably better as a counter attack forward that would allow him to run onto a ball huffed up the park. He blew some incredible – and I mean incredible chances. 6.0 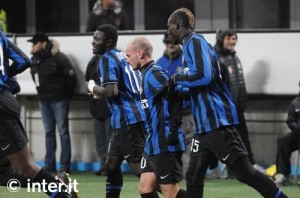 As I said, this was a Coppa game. But it was promising, in that we took it seriously and we put together some game minutes to players who have missed time this season. Plus, we got a look at a young player at one of the few positions that we might need some depth at.

Next up is the Champions League draw, which I am sure will get a lot of air and press, even though it’s a lot like the NFL draft. It’s a showcase, it’ll provide a lot of “talking points” but it won’t mean anything other than which players suit up against which other players. I personally don’t have any hopes or fears regarding the draw, other than I hope to see a nice Inter play. We have already achieved my minimum requirements.

After that event, we have a real game again and perhaps a score to settle with Lazio. 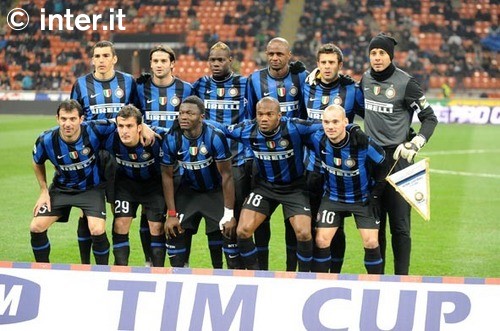