Share All sharing options for: Inter 1 - Lazio 0 Welcome to The Winter Break

Okay, it wasn’t a great game to watch.

But grinding out a win, especially against the bottom of the table, is Chapter One in the book titled how to contend for Championships.

But it was very important to win today. Juventus lost (again), Milan didn’t play, we kinda dropped points last game and it just seems like a good idea to go into the Winter Break with a winning mentality for momentum’s sake.

I think that’s safe to say that we had the better of the match and opportunities, although there was a tense moment or two. All told I thought that the game could have been summed up in this way: after the first goal (14 minutes in) we basically stopped playing, and Lazio tried to play but just couldn’t. There might have been penalties called on either end – 2 for us (Maicon and Milito), 1 for them (Maicon kinda handling) – but in each case it would have been a tough call, I think.

It would have been easier to swallow 1-0 if I didn’t see the Lazio goalkeeper flub 2 saves right into the path of our strikers.

If I gave out a Bonehead of the Match, I might give one to each of Stankovic and Motta for reaching the limit on cautions accumulated. On the other hand, there could have been worse times to miss a game for being a schmuck.

My Inter player of the Match goes to 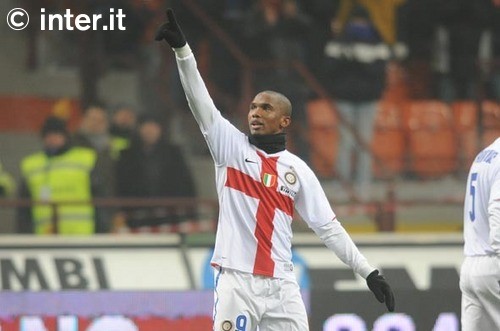 Highlights, ratings and stats after the break 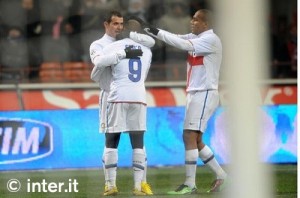 Yep you read that right. One single shot on goal against. There was one or two others that came pretty close as well, though – and here I am mostly thinking of the Kolarov shot that looked like it surprised everyone and had a wicked knuckleball swerve to it. But mostly the Lazio attack came down to them trying like hell to hoof it up the park and hope that Rocchi or Cruz could do something with it. Considering that those are two pretty good forwards, all it would take was a single mistake. Thankfully, we didn’t give it to them. 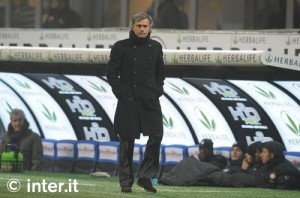 Cesar: Considering that he didn’t have much to do, he still handled the crosses very well, he managed his area well and I don’t have any complaints about his distribution. 7.0

Maicon: Decent in defense, he could have cost us with the obviously inadvertent handling – he wasn’t even aware that the ball was near his hand until hit it. In the first half he made an amazing charge into the box that resulted in his being taken down near the top. I didn’t see if the ball was hit first – or at all – but either way I didn’t think that either event warranted a penalty. 7.0

Lucio: Lucio teamed with Cordoba to cut out attacks very well. I can’t really express with words in any language what an improvement Lucio has been over Burdisso. 7.0 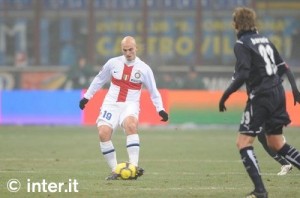 Cordoba: I miss Sammy, but Cordoba has been really well suited to deal with the counter attacking type of forwards we have been encountering lately, nice to see that kind of depth from the bench. 7.5

Motta: There are those who might tell you that they didn’t like Motta’s game today and I really thought that his late tackle was really stupid. But he’s such a good passer for a big strong tough guy. 6.5

Cambiasso: Today, I don’t know if Cambiasso played his best game ever with our team, but this probably the best he’s looked since the knee operation. It’s like he’s finally over it and up to fitness. If he comes back and he’s this on, teamed up with Sneijder… Yowza. 7.5

Muntari: I like Muntari – I think that we really need a guy like him – and I hope that he gets time this break to heal up his leg. 6.5 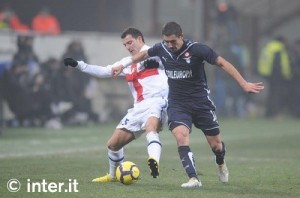 Stankovic: Stankovic is a fan fave, and he really won me over when he turned last year into his best season ever – but that booking he picked up was really dumb. It even dumber than Motta’s because Motta’s came first and everyone already knew that we were going to be a midfielder short against Chievo. Now we are 2 midfielders short for that game. I hope that Krhin is healthy. We might see his second ever start… All that being said, that was sweet cross for the Eto’o goal. 6.5 (-5 for being a dumbass)

Eto’o: Well this was the last time that I will see Eto’o – unless I can watch an ACN game. I can’t enough about how much I think he’s improved the team. We put up with Ibra because he put in double digit goal totals every year. I like Eto’o because he’s a joy to watch. Oh yeah, and he’s amazing too. By the way, his goal was high effort and incredible skill. The two traits that I think improve this team so much from last season. 8.0 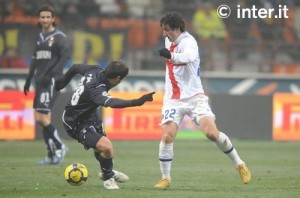 Milito: This was not Milito’s best game that I have ever been witness to. I don’t think it was a horrible exhibition either. I think that he’s just wearing down from the season a bit. He started out the season at a peak and now he’s in a slight valley. I know he has critics here – and I think that most of their concerns are merited. But I also think that his attributes outweigh them. Which is why I am willing to look past them. 6.5

Materazzi: How nice to see Materazzi again. I don’t think he did a whole lot more than collect a single ball and make a single pass. Great work, Marco. 7.0

Balotelli: Mario came on at the 86th minute to give the crowd a chance to say see ya later to Eto’o and get a good look at his replacement. I have been told that on another Offside Board they have been complaining that Mario doesn’t get enough time on the field to develop. In a completely unrelated note, I would like to congratulate Mario on his 21st appearance in Serie A (14), Coppa Italia (1), Champions League (5) and The Italian Super Cup (1) competitions this season. N/A 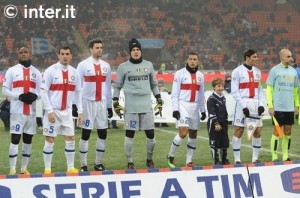 As I said, not a fantastic game to watch, but it was a competent and much needed win. As of right now, The Table stands with us 8 points ahead of Milan (Yes, yes, I know they have a game in hand, but I will only count the points that they have. If Milan supporters want to claim more points then they will have to beat or draw Fiorentina) our next closest competitors.

However, our next 2 games are against Chievo (Away) and Siena (Home). Milan’s next game is against Genoa (Home) and Juventus’ next game is against Parma (Away). They finish the first half of the season playing each other in Torino. There’s a lot of madness that could happen there, but the only thing that we have control of is that we need to win out the rest of the first half of the season. The other 2 teams need to face top 10 teams in 2 consecutive games. There is certainly a chance for us, here.

Anyway, that’s all worry barrowed against next year. As for the next few weeks I would like to welcome you to rampant transfer speculation in which we will probably be linked to every striker who ever lived. And then not buy any of them. Personally, I believe Moratti that we will be as quiet as a mouse during this transfer window. As long as we don’t send anyone packing, that is. After that, all bets are off. 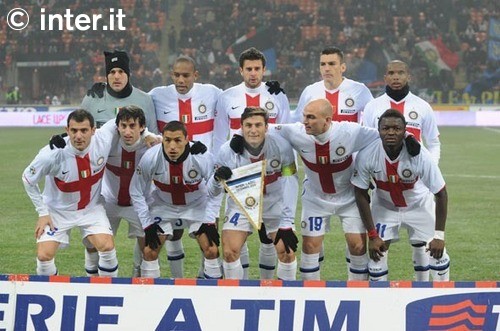