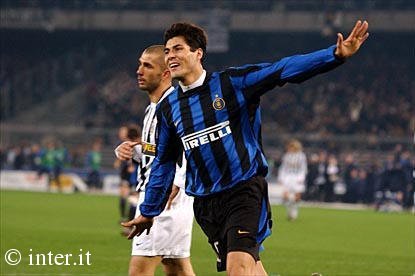 Consider this a little pre-preview. A little amuse bouche to awaken our football palates before the meaty preview that I will put up Friday night. I wont lie to you - Inter very very rarely beat Juventus in Turin: in 100 years, it has only happen 14 times. But that doesn't mean it is impossible. Just a few years ago, Inter managed just such a feat, soundly beating Juventus 3-1. Throw your minds back, way back, to Saturday, November 29, 2003...

This was the Julio Cruz show with a little side order of Obafemi Martins:

Inter dominated at the Delle Alpi on Saturday to record a famous victory over their 'Italy derby' rivals Juventus - the first championship win away to the Bianconeri since 21 March 1993 - and close the gap at the top of the Serie A to four points.

The undisputed man of the match was Julio Cruz, who twice beat Buffon then set up Martins for Inter's third before being substituted by Alvaro Recoba.

The opening goal came on 12 minutes after Obagol was brought down by Paolo Montero just outside the box. Cruz stepped up to take the free kick and found the top-right hand corner with a spectactular curled shot.

The Argentine striker redoubled 24 minutes after the restart, slamming the ball into the far corner after his first effort was parried, then 5 minutes later set up Obafemi Martins for the killer blow. The Nigerian raced on to his strike partner's headed pass forward, danced past Legrottaglie then slotted through Buffon's legs to send the black and blue section of the crowd into wild celebrations.

Juventus grabbed a consolation when Montero's last-gasp header found the back of the net via Recoba's arm. Too little too late to prevent the Bianconeri from crashing to their first Serie A defeat of the season.

Somehow, the fact that this was Juve's first loss of the season makes it all the yummier.

Oh, and did I mention? We also beat them the next year - thanks to Julio Cruz who scored the only goal. Less convincing, to be sure, but just as sweet. 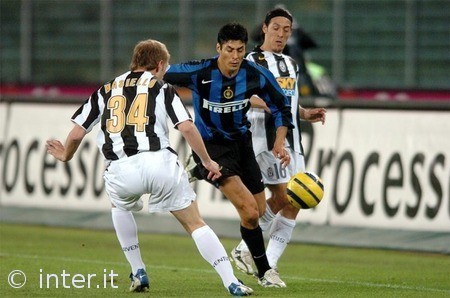 Cruz, Inter's Juve Killer. I sure miss him.

Look, I know that a win this Saturday is a long shot but it is by no means impossible. Inter has done it before and I have full faith that Inter can do it this Saturday - with Sneijder and Maicon or without them.

There are some here who think that this game is less important than certain other midweek games which shall remain nameless. That is just plain wrong. This game may not be a defining moment for our season in a points sort of way (although Milan have certainly managed to creep up on us), but a win would certainly be a huge boost for our collective psyches. Everyone feels better when Juve loses. Well, at least all right-minded people do and that is all that matters.

We can win - believe it!

You all know the words: