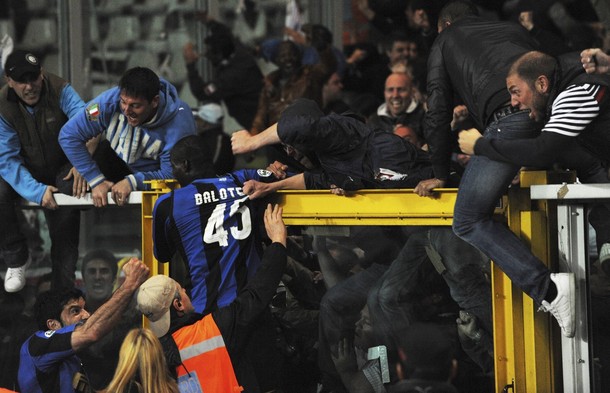 Well, here we are, mere hours before the the so-called Derby d'Italia. Inter go into this match with heads held (relatively) high, at the top of the table and having only lost two games all season. Not bad. Juventus, on the other hand, are on the wrong side of the dreaded (and much over stated) crisis. They come to the match a slightly wounded, cornered animal, kicking and clawing to regain what Juventini consider to be their rightful place at the top of the table. Three point tomorrow would certainly help them on their way. For Inter, this game is a test of grit, determination, and squad depth. No matter our relative positions on the table or our recent winning ways, those two stars on the Juventus jersey are visible proof that every team is the underdog when they come to the Old Lady's house. I just hope this underdog's bite is worse that its bark.

As I wrote in my last post, an Inter win at the Stadio Olimpico di Torino is a very rare occurrence. Inter has traveled to Turin for 90 league matches against Juventus and of theses, Inter has only won 14 with an additional 17 draws. I will leave you to do the math for the rest as the number is a bit embarrassing. Last year, this game was one of those draws. Between the last ditch clearance off the line and the fact that their goal was the result of a massive defensive error in injury time - this really should have been a win instead. It chaps my hide, let me tell you. We should've kept our heads - we should've beaten them. Highlights:

I am not going to spend much time here. If you are interested in their take, go visit Roberto and Alessio over on the Juventus board.

Basically, All we need to know is that Ferrara's injury troubles are just about over as only Salihamidzic and Iaquinta remain unavailable. Everyone else is at his disposal.

Mourinho has called up 20 players (it was 21 but Maicon's ban was upheld):

Well, no real surprises here. Wesely is still smarting from his little outing with the Dutch National team (damn you Orangies). Hasn't anyone ever told them that it is rude to break a person's new toys? Mario is back on the list and if he doesn't play tomorrow it will be for "purely technical reasons" (or so says Mou). Good news indeed as Balotelli knows how to score against Juve and we need that - desperately. 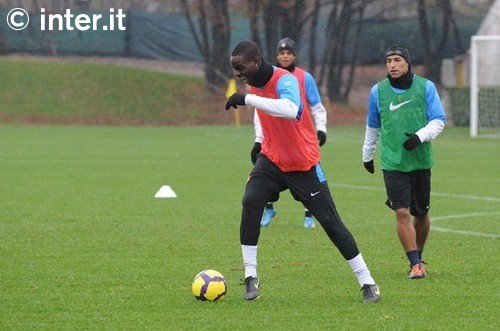 Back to training with a smile on his face. That's what we like to see.

And really, what else could it be? It would be nice to Sneijder in the mix - fingers crossed he is just left out so that he can be tip top on Wednesday - but it is not to be. Maybe when they come to Milan things will be different.

Mourinho was quite low-key at his press conference today. I think this was in large part an effort to take some of the emotion out of the game and basically, just bring things down a notch or two. Apparently last week's press silence was also part of that. Mourinho said:

"We gave a positive response to what the environment Juventus had asked a few days ago. They asked us very quietly to throw water and not gas on the fire and we were in total agreement. The way to do is to not speak at all, to say nothing, to not feed the controversy, to speak calmly and not to give even the possibility that that the words are misrepresented or taken our of context. President Moratti and Director Branca have spoken and they are the people responsible for what they have to say, the team has remained quiet, I am here with the profile that you have already guessed and I think we responded in the manner that Juventus requested. For this reason, I see no reason why tomorrow night should be anything other than a football match and only this, nothing more."

He went on to praise Juventus saying:

"Last year, Juventus was already a team with quality, then they invested about 50 million in the summer market... Juve bought good players... I expect an angry team, angry with itself [which will be hard to face] because usually an angry team has a higher level of motivation and concentration."

He also dampened the fire just a bit more by downplaying the importance of this match in general and specifically to Inter's overall scudetto campaign saying:

"Juventus-Inter is obviously an important game, it brings with it much history and many of these games are already part of it. But for me, it is a game for three points, points that are exactly the same as those we have acquired from the game against Fiorentina and that we lost against Sampdoria. Exactly the same. ...the only thing we know one hundred percent is that, whatever happens, we will leave Torino first in the standings, there is no doubt. Regardless of our result and that of other teams that are around Inter, we will leave from Torino first in the standings. This certainly does not diminish the motivation nor the desire and the confidence that the team has to do well, to play a good game and gain a good result."

All in all, it was a pretty tame presser. Clearly, Mourinho can keep it in his pants when he needs to. The only small jibe Mou got in was against Court of Federal Justice when he said he expected "giustizia no giusta" from them (which roughly translates to "justice not fairness" or something like that) in Maicon's case. I dont know if their ruling was fair or not, but Maicon is out.

Ok, cards on the table. I want to win this one. I mean, I really want Inter to win this one. I know it wont change how the media portrays Inter or change anyone's opinion, but I want to have at least this one shining thing that I can look back on no matter the outcome of our season. Something I can look back at and say "At least we did this one beautiful thing." And best part is? I think we actually have a shot.

A quick look at the standings table shows that Inter has scored more goals and conceded fewer than Juventus. We have dropped seven points so far this season (1 loss, 2 draws) while they have dropped 15 (shocking)! Even better, our away attack and defense is better than theirs is at home. Still, we mustn't get carried away. Juventus has a good squad. Plus, they will be out for blood. Blood we will need next Wednesday. We must stay focused on this game and forget the next. We must come with respect of Juve but no fear. We must play until the last whistle and never say die. Oh, and Eto'o has to finally come through with those goals he has been promising. If we can do all this, or maybe even just some of it, we can actually win this thing.