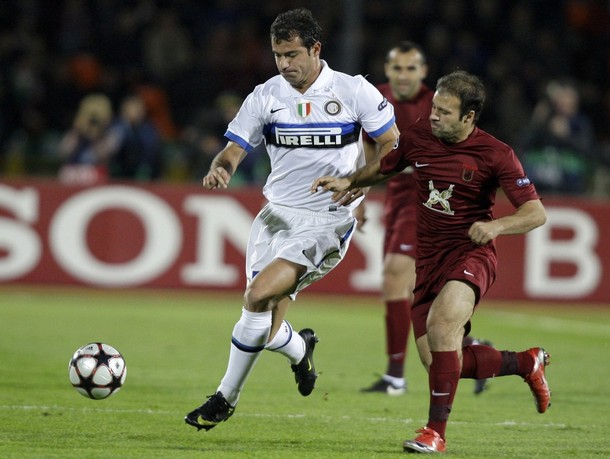 Yep, its Champions League time again (Hooray?) and this time they are coming to us. The recently crowned champions of Russia, Rubin Kazan, are coming to Milan to see who will get to continue in this competition and who will suffer the humiliating fate of the Europa League (shudder). No matter what eastern backwater they come from, Rubin Kazan is a good team, a really good team. Remember the Barca game in Milan? Well this one is going to be harder. At that point, a win would have been nice, but it wasn't crucial. This time, it is win or go home. Yikes.

What: Internazionale Milano v Rubin Kazan, Champions League Matchday 6
Where: San Siro, Milan
When: Wednesday, December 9, 8:45 local time (11:45am pacific, 2:45pm eastern)
How to Watch: Live on Fox Soccer, PPV through UEFA ($9.98), or try to find a stream (MyP2P, Rojadirecta, Ustream, and ATDHE.net). For the truly desperate, there is the Live Game feature on the UEFA web page.

Ok, I admit, I took a little poetic license with the intro. According to UEFA, Inter dont really have to win this game - we just have to not lose or let them score more than 1 goal in a draw. If Barcelona beat Dynamo, Inter would go through with a win, a goalless draw, or a 1-all draw. A 2-all finish would put Rubin through. Are you still with me? Now, if Dynamo beat Barca, then only a win would put us through. Of course, it would also mean havoc in the streets as people attempted to dodge flying pigs. Basically, just to be on the safe side, we should really just win this game.

La Gazzetta has made this handy little chart so we can all keep track: 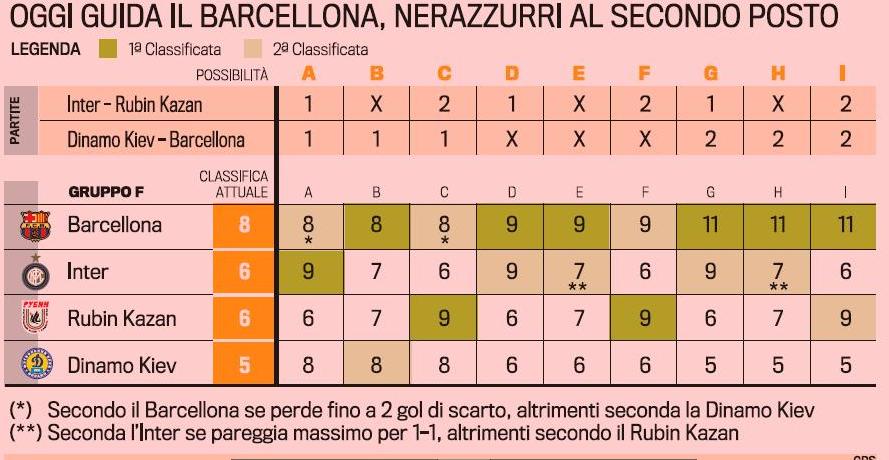 Things didn't go quite as planned in Russia. We conceded an early goal, then in the second half, Balotelli was sent off. Really, until that point, I think we had a pretty good shot of winning. Down to 10 against the Russian champs, though, I think we were all happy with the draw.

As I said above, the Russian season has ended and Ruban Kazan are the champions, again. And by a pretty huge stretch, too. They finished 8 points ahead of second place with the best offensive (62 goals) and defensive (only 21 allowed) records.

Their star forward, Argentinian Alejandro Dominguez, was named the player of the year for the Russian Premier League, having scored 15 goals in 23 games (plus 2 in the CL) and 7 assists.

Word is, he is looking to parlay that success into a ticket out of town, with an eye to Italy and Spain. His agent, Jorge Cyterszpiler, has sent representatives to Turin as Juventus would like to add him to their squad in January. They will have to beat Valencia out to do it, though - or so they say.

As for the rest of the team, presumably they are much the same as our last game. Their other star forward, Aleksandr Bukharov, is just as prolific as Dominquez (16 goals in 23 games). Plus, he likes to score multiple goals in games: he has two hat tricks and three additional doubles in the Premier Liga.

Oh, and their keeper is quite good too - but I think we already saw that.

They have two players out through injury: defender Roman Sharonov (knee) and midfielder Aleksandr Bukharov (wrist). Both are apparently starters as they have played in all Rubin's other Champions League games. So bonus for us, I guess. 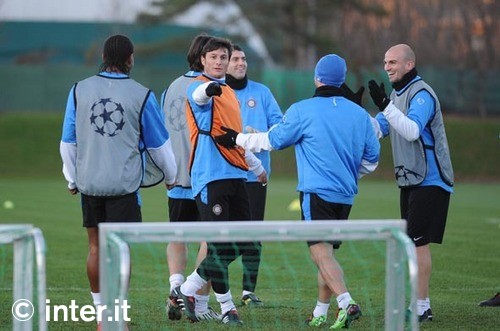 Mourinho has called all the fans to be present at the San Siro for the game. Believe me, if I could get away, I would totally be there. It looks like all hands on deck for this one, so that means practically the whole first team has been called up:

As for the missing names, Santon and Quaresma are injured while Chivu is suspended for card accumulation. Really worrying is that Samuel, Maicon and Zanetti (yep, our steadfast Captain) are all a booking away from a suspension. What on earth are we going to do if both Zanetti and Maicon go down. Yikes. But I guess we will cross that bridge if we come to it.

As for the line-up, Mou is playing everything quite close to his chest, saying:

I think we can make a couple guesses:

Or something like that. Just for the record, though, if I turn out to be right (which is not terribly likely), I was never in those trees. Whatever those guards say - it wasn't me.

The rest of the press conference was short and I think Mourinho was visibly tired. The main point of his whole statement was:

So. That is about it. There is really not a whole lot else to say. Everyone know what we have to do (hint: win). Sure, if we dont, there is still a small ray of hope, but if we go into this with the attitude that a draw is acceptable, then we are done for. Without a doubt. The only thing for it is to go out there and play like their very lives depend on it.

I think we can win. I think this team is actually pretty darn good and, when everyone has their heads together, they can do some spectacular stuff. Still, sometimes things just dont go your way. In the result that things end poorly for us tomorrow, I just want everyone to remember why they love this team. In my opinion, everyone should be absolutely certain that Inter will win tomorrow, but prepared that they dont - that way all your bases are covered. Besides, if we dont go through, that just means we will get one more shot at kicking the stuffing out of Juventus.

Have faith, Ragazzi. Everyone pay special attention to the Calcio Gods tonight. Or, if you rather, you can always light a candle to San Siro (yes, he is a real saint with a cathedral and everything). Whatever. Just believe.

On closer inspection (and in the light of day), as Hamood pointed out, this is an old picture. The Inter web page totally punked me by posting it with a whole mess of training photos from yesterday. Not cool, Inter web page, not cool. 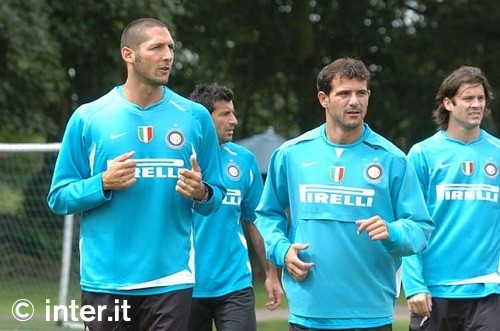