Share All sharing options for: The Milan Derby - Paolo's Take 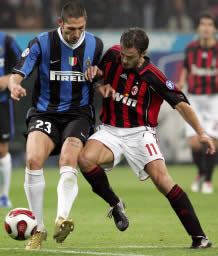 Once again, it is Derby Time. This year, it is a little extra special as with a win on Sunday, not only can Inter help to crush Milan's Scudetto hopes, but we can right the horrible wrong we allowed last September. We have another opportunity to stop the evil empire that is AC Milan.

In an attempt to whip the fans into a frenzy, I have asked the readers of my blog to send me any little remembrance, comment, or essay about the derby.

Paolo has responded with this:

It has been debated countless times as to which Derby is the best in the world. Everyone likes to make a case for why their Derby is the greatest one. The truth remains that the Derby Della Madonnina pits two of the World's Oldest, Biggest and most Famous Clubs against each other in one of the sport's most historic stadiums making it a true Clash of Titans. This is a heavyweight title fight! Arguably it is the Biggest Derby in the world and to me it is the greatest!

For me, it does not get better than Inter vs Milan. I get completely wound up in the week leading to the derby. My love and passion for Inter is equally matched by my hate for Milan. The game always carries a lot of emotion and is always an intense affair. My friends and I always get together for this and I will be playing host for Sunday's match. It promises to be pretty hostile as for 2 hours the friendships really do go out the window. The neutrals choose to cheer for what will be best for their club. It's Inter vs the lot on Sunday!

My Favorite Derby Moment was finally being in attendance for one on 28-Sep-08. As I have stated tons of times it is truly remarkable! For those who have been you know what I mean. For those who have not been, I highly recommend you do so as soon as you can. I am definitely going back and I just learned I have a pretty sweet hook up for when I do!

As for past Derbies, I don't like to get too much into the past because what's done is done, we have issued and taken beatings in these ties and hopefully it is a tie that continues on forever!! I must mention the two matches of the 2006-07 Record setting season. Those Derbies were kind of special. Inter broke and set long standing records that season and in the process took 6 points from the Derby that season. The first time either team had done so in quite some time. Both were great games and in case you don't remember:

To all the Milanisti, I give you my fav Anti Milan Vid:

After all what is a Derby without the Banter?

We have dropped 2 straight matches to them and come Sunday it is time to make it all right again and shut the door on their dream of a Scudetto this season as we set out to take our 17th title!

If you would like to see your thoughts here, send them to me at johonnars [at] gmail [dot] com