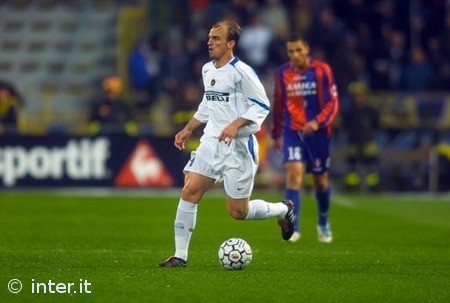 What: Bologna v Inter
Where: Stadio Renato Dall'Ara, Bologna
When: Saturday, Feb 21, 4pm local time (7am pacific, 10am eastern)
How to Watch: FSC is showing it on tape delay (1:30pm pacific, 4:30pm eastern). If you want to watch it live, find a stream ( Justin.tv, Rojadirecta, Ustream, and ATDHE.net).

"What" you say, "Dont we have the Champions League tie next?"

Nope, first we have to go to Bologna and try to keep focused long enough to score a couple of goals while simultaneously keeping them from scoring. Complicated, I know. Believe me, this game has me frightened. I know that I am preoccupied with Manchester United. I cannot imagine how it must be for the squad.

Normally, I would post a video of our last game with the team in question, but this time, it was so long ago that there aren't any.

Mourinho knows this and is attempting to put our focus back on this weekend. He said:

"There won't be any messing around in this match against Bologna. Whoever messes about will be joking with the team and with me, and whoever jokes with me won't play on Tuesday, so for this reason I'm confident that we will play against Bologna with serenity, to win."

Mourinho has called up the almost typical A Squad:

I expected to see Marco on the call up list, but he is suffering from an inflammation of scar tissue in his thigh - presumably from his terrible injury a couple years ago. Chivu and Burdisso are suspended for this game, while Obinna, Crespo and Jimenez were not called up for "technical reasons" (whatever that means).

It seems that, while he may not start, Vieira will likely see some play time. Mourinho says:

"Against Milan he was in the field for 15 minutes, the day after he returned to practice and has worked well for the whole week. Tomorrow he will play again and probably for more than 15 minutes. He is in a process to return to the real Patrick Vieira."

That means the lineup may go a little something like:

But then, it may not. Who can say with such a cagey coach.

Ok, so Ben was supposed to do a preview or something, but all that is up on the Bologna blog is some creepy video. Still, it is better than nothing.

Really, all I can tell you is that Di Vaio will be up front, Mudingayi and Mutarelli will play havoc with our midfield and defense, and Antonioli will do his best to keep out Adri and Ibra. According to Il Corrierie dello Sport, Volpi is out injured.

I actually have a little felling for Bologna. I always like Sinsia and I would like him to do well as a coach. Still, he is standing between Inter and our next scudetto so he must go down. Simple as that.

Ok, Bologna sit one game above the relegation zone at 23 points. They have allowed 39 goals this season while only scoring 26. They have lost a full half of the games they have played. Still, they are fighting for their lives and so are totally unpredictable. They deserve our total concentration.

I leave you with a little Viareggio Cup: Inter 3 - 0 Maccabi Haifa