Inter v Man United: The Hour of Our Destiny Is Upon Us

Share All sharing options for: Inter v Man United: The Hour of Our Destiny Is Upon Us 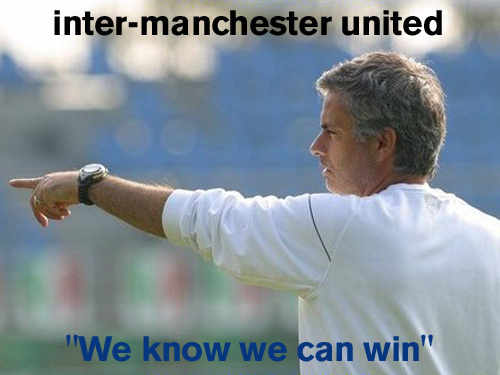 [Que the swelling music and Mel Gibson on a horse- or Kenneth Branagh on St. Crispin's Day]

Well Ragazzi, after months of waiting, the Manchester United game is upon us. After all the hype, all the media attention, all the pundits weighing in for one side or the other, it will all come down to 90 minutes. Frankly, I am scared. As an Inter fan, Europe has been a crushing experience for me. More than anything, I don't want us to embarrass ourselves - Roma style. Also, I am afraid that if we get knocked out of the Champions League again it will kill our confidence for the rest of the season and we will let the Scudetto slip away. But I am trying to shake off the dread and find a place of cautious optimism. If Mourinho thinks we have a shot, who am I to say he is wrong. 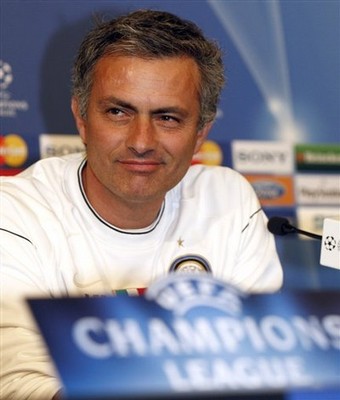 Mourinho has all but named his starting 11:

"We'll play like we did in the League, 4-3-1-2, a midfield with Cambiasso, Muntari and Zanetti, Stankovic behind the two points, Adriano and Ibrahimovic, and we are not afraid to say so."

He latter added that Santon will play (although, not that he will start) as will Maicon (but that was a no-brainer).

For the rest, Mourinho has called up 19 players:

Walter Samuel is actually injured, it seems, and is not available. Given the list of defensive players, this is the line-up that I expect tomorrow:

Julio Cesar
(of course)
Maicon - Cordoba - Chivu - Santon/Maxwell
(I just don't know if Il Bambino is ready for a full 90 against ManU)
Zanetti - Cambiasso - Muntari
(Muntari had better mind his P's and Q's and not get sent off)
Stankovic
Ibrahimovic - Adriano/Cruz?/Balotelli?
(Adri will never last the whole match)

I am terrified that Muntari will do something stupid and get sent off, or that Cambiasso will pick up an injury. Who could we ever replace him with? I am also very disheartened when I look at our bench of forwards as compared to theirs. But then, I think that if there was ever a time that we could actually pull this off, it is now.

Almost everyone is in good condition and match fit. The one notable exception is Adriano. He looked tired and out of sorts against Bologna which is worrying ahead of this game. Everyone is raring to go and confidence is high.

Stankovic has said: “When Mourinho says that Inter are stronger than Manchester United it gives me an incredible faith in our own means."

Zanetti also feels Inter is in the right space to win, saying: "We have prepared for the match in great detail and I believe we have everything right to win it. We are in great form, we won our last league match and we have great desire. We have a great chance of winning." 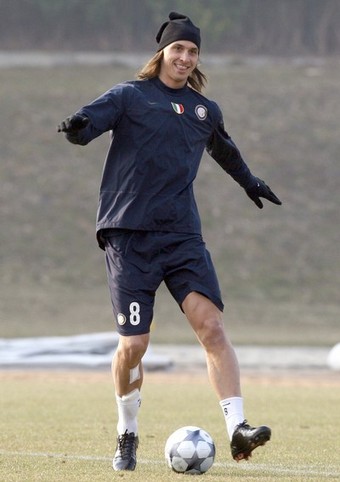 Plus, I forget that they are worried too. Apparently Manchester United is having some injury problems in their defense. One fan, in comparing this game to that played against Milan in 2007 when they had similar problems, had this to say:

"We all know how this makeshift defence, with the half-fit Vidic, coped against a rested and fresh AC Milan: pathetically, giving away unbelievably cheap goals in the first half. Thus we had been dumped out of Europe but at least they went on to beat the Scousers in the final. I'd rather forget that game but as I contemplate the threat of Adriano and Ibrahimovic the memories of that night keep popping up..."

Somehow it is reassuring to know that they are just as nervous as I am.

Ok, normally I would do a "Them" section here. Wayne from the Manchester United board and I have exchanged questions about the upcoming game to get some perspective from the other side. When he sends back the answers to my questions, I will post them here. Check back.

My Questions to a Manchester United Fan, as answered by Wayne:

1. As a fan, are you happy with the Inter v Manchester United match-up or would you have preferred a different team? That is, are you excited to watch these two teams play?
I'm delighted with this match up. Then again, I'm always happy when Man Utd play, so this is no different. To be honest, I'm always intrigued when we go up against the best, and Inter are Italy's best. And as was stated in a previous Offside post which I can't fully remember, this is a true CL tie, between two league leaders and reigning champions. It doesn't really get any better than this.

2. Do you think this tie is tactically different than an EPL game? Will Ferguson approach this game the same way he would against one of the top EPL teams (say, Liverpool or Chelsea)?
It is in a way, European football tends to be slower, with a more pragmatic approach. Teams almost play chess on the pitch and in that way this game could be similar to our matches against Chelsea or Liverpool, where sometimes both teams are so afraid to lose that they don't try to win. But it could be different also, Inter are an attacking side and so too are United so an all-out attack from both sides could happen. What's more likely is that this will be a very tight game. Mourinho and Fergie will be trying to second guess each other and this, for me, will result in a really high pressure game. I think that this could resemble last season's semi-final between us and Barca at the Camp Nou.

3. Who is your favorite Inter player? Who do you hate?
I think Zlatan is my favourite player. I've watched him since his Ajax days and I've seen him play fro Sweden in many tournaments. I just love the way he plays when he's on form. Some of his skill is so fluid and natural that occasionally I think he's one of the best in the world. But I have to say that I kinda hate him too. If he was a Man Utd player he'd be Ronaldo; incredibly talented with hints of utter genius but sometimes does things that make your blood boil with frustration. When he's on form he's amazing, when he's not he's merely a bystander.

4. Where do you think Manchester United need to dominate if they're going to win the first leg?
Our defence is totally depleted at the moment. We've had much publicised defensive injuries of late and we're really hoping that either John O'Shea or Jonny Evans, or both, are fit. Because of this possible defensive frailty, our midfield is the key I feel. We need either Scholes or Carrick or Fletcher or whoever to get the ball down on the ground and boss the Inter midfield. We can't let your lot have any time on the ball in the centre of the pitch and if we dominate the centre, I think we'll win the first leg.

5. Who do you think is the biggest threat on the Inter team for this first leg?
No doubt for me that if he's on form, Zlatan will be the main threat from Inter team. If he's feeling good about this match, and knowing Mourinho's man-management skills he is, then he'll be really buzzing for this match. The United defence need to keep an eye on his movement and I can see Rio Ferdinand man-marking Zlatan during this match. He's the type of player that needs constant attention, and no better man t take care of him than Rio.

6. What area do you think is Manchester United weakest on the pitch and do you think this will effect the game at all?
Ordinarily, I'd find it difficult to answer this question. But given our defensive injuries, it has to be the defence. With so many first and second choice players absent it's going to be a real test for the other people that come in. Inter are a hard team to play normally, but at the San Siro they're even better. This is a real chance for United's young defenders, if they play, to prove their worth and show they're top class. If the replacements don't settle and can't handle the pressure I fear that it could have a massive effect on the game. To the tune of a few goals.

7. Just how important is C Ronaldo to Manchester United? Could they win without him if need be?
Of course they could. He's one of our most talented players but he's not the heart of the team. Players like Scholes, Giggs, Rooney and Rio are the types who drive this team onwards. Ronaldo is an exceptional player, and we're not as good a team without him, but I think we have enough good quality players in our team to feel confident going into this game.

8. What do you think that Manchester United has that is lacking at Inter; why will Manchester United be the strongest team on the pitch tomorrow?
Because we're the reigning European champions. We're leading a league that I personally feel is superior to Serie A and all our players know what it feels like and know what it takes to win. Inter's most recent European trophy was 11 years ago and as a team, they don't know what it's like to win a European trophy together. We have a great manager (which you have too, so don't get on my case about that) who is a true winner and who relishes victory more than anything else. He's desperate to guide this team to be the first team to successfully defend this trophy since the introduction of the Champions League format and I think he will, starting with tomorrow.

So there you go, a brief glimpse in to the heart and mind of an actual Manchester United fan.

One little snipped of news that I found intriguing is that Darren Fletcher's (ManU Midfielder) house was burgled soon after he left for Italy. I have no idea if this is good news for us or no news, but it would certainly distract me. 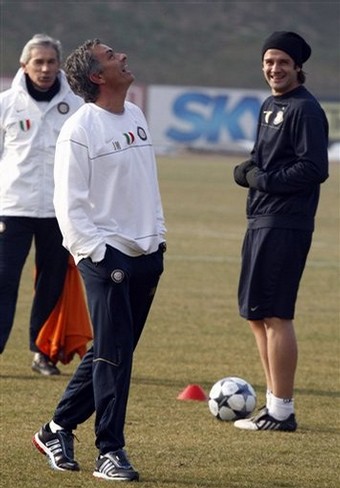 Mourinho is preaching calm. His plan for tomorrow is to: "train a little, study some, laugh a lot, because laughter is good for all and wait for the game with a great desire to play."

For myself, it is important to keep this tie in perspective. Sure, they are being hyped as the games of the year - the ultimate showdown between England and Italy, Mourinho and Ferguson, and Ronaldo and Ibrahimovic. In reality, these two games are just that, two games. Believe me, I want to win as much as any other Inter fan. I want to crush them in both games of this tie and stamp our way across whomever stands between us and Rome. Then, I want to win the final in a giant blaze of nerazzurri glory - completely humiliating any team that comes before us. The whole while laughing maniacally. But then I remember to breath, and that no matter the outcome of this game, there will still be a next one and one after that. There is always another chance to make good.

That said, I believe that we can win this game and the one in Manchester. I think they underestimate our determination. This is a team that I have watched go 2 down in the first half and score 4 in the second half to win (2 for Ibra, 2 for Cuchu). If we keep our wits about us and play like there is no tomorrow, there is no team we cannot beat.