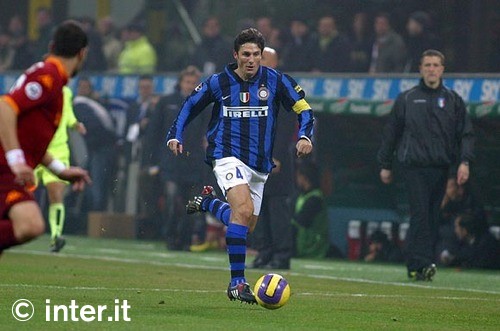 Barring any UCL ties that may come up, this game will be the last meeting between Inter and Roma for the season. I will admit, I am a little nostalgic - this season has just flown by. It seems like just yesterday we were sweating over the Supercoppa d'Italia. Sigh... good times, good times...

Inter has already beaten Roma three times this season, including twice in Milan, but Roma are a tricky team and they can pull rabbits out of hats you didn't even know they had. Last year was a draw, but it came with a very important point for Inter. That, and a moment of ecstatic joy when Zanetti fired home the equalizer. It was one of those moments when you leap off the couch and dance around the room shouting at the top of your lungs. Hopefully, this year will not require such heroics.

Here is that game:

If there is one team that is well represented on The Offside, it is Roma. As such, I wont devote much space to them here. Besides, with their ever-changing injury list, who knows who will actually be fit come Sunday. Whoever it is, I am sure they will pushing for a win to wash the bitter taste of Arsenal out of their psyches. They could probably use the points as well. 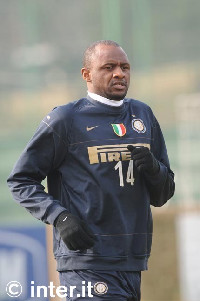 Although Vieira is on the bench, it seems he is not quite match fit so will not start. Mou is hoping there will be an opportunity to get Patrick into the action, though, because we need the depth he offers in midfield.

At the back, Samuel is injured, and, since he is also training alone, Chivu is either being rested or has picked up some sort of knock. Everyone else has been left off the list for "technical reasons."

Formation wise, Mou is being very cagey. Besides saying that Vieira will not start, he gave nothing away. I think he would like to rest some of the midfield, but we really dont have the depth. As Mou said today:

"...when I think of resting Cambiasso or Zanetti I can no longer play with a 4-4-2 because I dont have other players who can replace them playing in the same position and with the same quality."

So there you go. We have what we have and will just have to make the best of it.

Statistically speaking, we usually win this fixture: out of 77 games played, Inter has won 42, drawn 23 and lost only 12. Inter has scored 145 goals and only allowed 74. Unfortunately, the Calcio Gods pay no attention to statistics or any sort of math - they are fickle and beyond the ken of mortals. Still, I find numbers comforting, in a pattern-seeking kind of way.

One thing I think we will see are some goals. Historically, this game has them - there have only been eleven scoreless draws since 1927. Plus, after the scuffed shots against Man United, I suspect there has been lots of shooting practice this last week. Everyone will be itching to show they can actually put one in the back of the net (please please please).

Maicon showing Adriano where the ball is supposed to go.

This time last year, we had 61 points, 9 more than second place Roma and we all know how that turned out: 45 minutes of nail-biting agony on the last day of the championship. I would like to sew this one up 2007 style. In order to do that, we must walk into the San Siro and take Roma down. Simple as that.

And here is a little video to remind us all to love Julio Cesar ♥ He just makes me all kinds of happy.